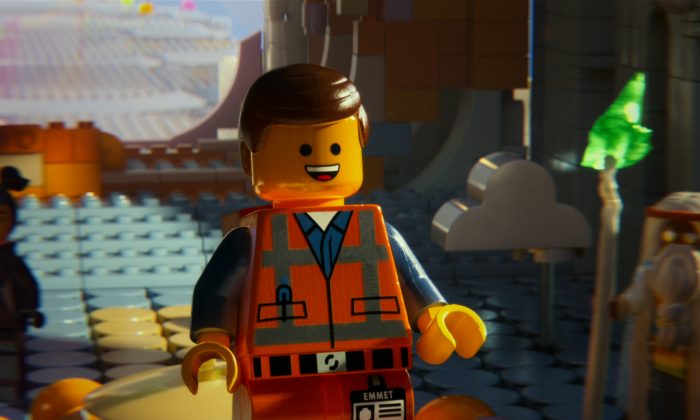 A scene from "The Lego Movie." (Courtesy of Warner Bros. Pictures)
Entertainment

The LEGO Movie: Order vs. Chaos!

When first hearing about “The Lego Movie,” the reviewer thought it might be like YouTube’s hilarious “Death Star Canteen,“ a stop-action LEGO video wherein Darth Vadar eats lunch in the Death Star cafeteria.

He orders “Penne a lá Arrabiata” and then gets into an argument with the server, who thinks he’s talking to “Jeff Vadar.”

Server: You’ll need a tray. The food is hot.

And so on. That would have been an awesome, adult-level, slightly Python-ish, LEGO movie.

The official LEGO movie is for the five-to-ten year-old set. And for this adult, it was the equivalent of sticking one’s head in a large box of LEGO pieces and having an enthusiastic child whack the box with a hockey stick for two hours.

So, once upon a time, there was a LEGO world. And in this everyday LEGO-world, there lived a small LEGO-everyman named Emmet (voiced by Chris Pratt).

Emmet follows instructions, drinks ridiculously high-priced LEGO-coffee, listens to the LEGO-radio play “Everything is Awesome,” and watches LEGO-TV shows like, “Where are My Pants?”

One fine LEGO-day, Emmet finds “The Piece of Resistance.” What’s that? Well, it’s the cap to the “Kragl.”

And “The Kragl” is, in actuality, a tube of Krazy Glue with a couple of letters missing.

Now, in that aforementioned human dimension, see, there’s this boy who likes to play with dad’s gargantuan Lego set when dad’s at work (will the real Emmet please stand up?)

This boy would like to do away with dad’s Krazy Glue (and dad doesn’t want his meddling son anywhere near his arrested-development hobby) because with it, dad AKA Lord Business can block the tinkering of small hands. Dad’s Kragl is the death of son fun!

Okay, so that’s a taste of the behind-the-scenes, human-dimension stuff.

Meanwhile, back in the Lego-reality, Vitruvius (Morgan Freeman) is a Lego-wiseman. Wyldstyle (Elizabeth Banks) is a sort of a rebellious Lego-ninja girl. They have painted-on faces.

They inform Emmet he’s “The Chosen.” He’s a “Master Builder.”

What’s a Master Builder do? Generate and build stuff! Thus freeing the universe from the inhibition of The Kragl!

So? Got all that? It’s actually quite religious and profound. It’s even somewhat fundamentalist. Perhaps orthodox is a better word.

You see, Lord Business is a kind of guru, who decrees “The Dharma,” if you will. He decrees the law. It’s a bunch of “instructions” that keep his minions and creations pristinely separated into their various universes. No mixing of anything whatsoever!

Speaking of mixing, an especially clever ontological construct is having all the various LEGO game-sets represent various dimensions of the universe, which allows all the well-known LEGO characters to be trotted out, such as Batman, Han Solo, and Shaquille O’Neal. Guess who voices Shaquille O’Neal?

It’s not allowed to mix universes! So, in the end, the badness of Lord Business might not really be bad. Order in the cosmos is good!

But what five year-old mind can understand that? Kids don’t want toy rules. They want to dump all that bounty of LEGO on the rug, put Shaq’s head on Han Solo’s body, and stick mermaids in the Bat-mobile. Right? That’s good stuff!

They even want to mix in foreign, found items, like band-aids and golf balls, pronounced, hilariously, “Banda-eed,” and “Orb of Teeta-leest” (Titleist) respectively. Kids. And play. Gotta love those imaginations.

It’s all CGI of course. According to the press notes, a stop-motion approach would have taken approximately 15,080,330 LEGO bricks.

In the end, you will reach for a fresh tube of Kragl…