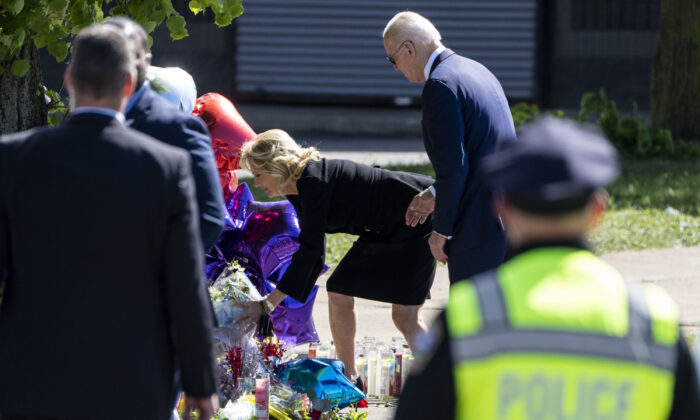 Jill Biden places flowers at a memorial just across the street of the Tops Friendly Market at Jefferson Avenue and Riley Street in Buffalo, N.Y., on May 17, 2022. (Kent Nishimura/Los Angeles Times via TNS)
Viewpoints

The Law and Racism

The overt racism and anti-Semitism written in the Buffalo shooter’s 180-page “manifesto” has been rightly denounced by civilized people. The usual questions are being asked. These include how did he get the gun after he was admitted to a hospital last year for symptoms of mental illness?

Another question: Why did President Biden go to Buffalo when as many, or more people, have been shot on an average weekend in Chicago? Thirty-three were shot last weekend in that city. The president didn’t visit the sites of other recent shootings. Last July, after more than 100 people were shot in Chicago, Biden declined to visit the city, opting instead for a speech about infrastructure in suburban Crystal Lake. Didn’t those lost lives and wounded victims matter as much as the people who were tragically cut down in Buffalo while shopping for groceries?

As a New York Post editorial correctly noted, “One thing’s clear … (the shooter) never should have been able to get his hands on the Bushmaster assault rifle …” Press reports say the gun shop owner who sold the 18-year-old the weapon could not find any information that would have disqualified him from making the sale. Why? Did the hospital that evaluated him for mental health problems not share information with authorities about his diagnosis? It wasn’t the first time he had demonstrated mental instability.

New York Governor Kathy Hochul has pledged to close “loopholes” in state gun laws. Buying large magazines is already illegal in the state. That didn’t deter the shooter. People intent on committing evil acts will find a way, no matter how many laws are passed.

Most TV networks defaulted to their usual position as to what’s needed to stop or reduce shootings: more gun control laws. They never tell us which laws a lawbreaker intent on killing people are likely to obey.

There is something else about the continuing narrative of race and racism in America.

One doesn’t have to be a cynic—just an observer of how politicians and politics work—to conclude that most shootings involving blacks shooting other blacks don’t fit the “America is a racist nation” narrative for the media and especially Democratic politicians. These incidents appear to receive less national coverage and fewer denunciations than when a white person shoots black people.

Here’s my suggestion on one way to fight racism. As one who has worked in television most of my professional life, I want to challenge my colleagues to start doing stories on successful, family-oriented, and religious African Americans. I attend a diverse church where the pastor is a man of color and the congregation is made up of different ethnicities—Cuban, Mexican, Puerto Rican, and black, as well as white. We sing the same hymns and pray together. No TV cameras are there to record the service as a positive image of diversity.

Too often, TV focuses on stories about the corrupt leadership in the Black Lives Matter organization, criminals who are black, minority welfare recipients who are able-bodied, but don’t work, while ignoring whites who are able-bodied but don’t work. I’m not saying these stories don’t deserve attention, but they should be balanced with stories about the overwhelming number of people who obey secular and moral laws.

Covering stories that show people at their worst while mostly ignoring them at their best is racism and contributes to negative stereotypes and perceptions. It would also help if more Republican leaders and conservatives were seen as denouncing racist ideology. I do.

Good and evil don’t exist in a vacuum. Whichever is promoted, tends to dominate.