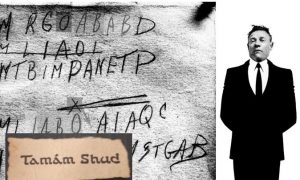 The Dongba symbols are an ancient system of pictographic glyphs created by the founder of the Bön religious tradition of Tibet and used by the Naxi people in southern China.  Historical records show that this unique script was used as early as the 7th century, during the early Tang Dynasty, however, research conducted last year showed that its origins may date back as far as 7,000 years ago. Incredibly, the Dongba symbols continue to be used by the elders of the Naxi people, making it the only hieroglyphic language still used in the world today.

The Naxi people lived in the beautiful mountain province of Yunnan (“south of the clouds”) for thousands of years, where they developed their own rich and enduring culture. Today, most of the 270,000 Naxi people live in the county of Lijiang where they retain many of their ancient traditions.

The Dongba script of the Naxi people is both pictographic and ideographic. The writing, unlike anything known elsewhere, superficially resembles the ancient Egyptian hieroglyphics, but it has a certain action and humour that distinguishes it from other scripts. While there are only about 1,300 symbols in total, the script has been used to write a huge number of scriptures, from incredible tales of creation to methods for carrying out exorcism. They also provide a kind of encyclopaedia of the ancient Naxi people, recording in detail their beliefs, customs, traditions and ways of life.

It is not a simplistic system of writing. Illustrations were used to represent not only material objects but also abstract ideas, syllables, and even methods of pronunciation. For example, the character ‘cliff’ has the form of a cliff and it has the same pronunciation as ‘chicken’, which is illustrated by a chicken head drawn inside the cliff.  A single pictograph can also be used to recite different phrases or an entire sentence. The script is incredibly logical – when a symbol is drawn upside down it indicates negation; straight lines drawn between people indicates ‘fight’, while entwined lines represent ‘discuss’; a dead animal is drawn as usual but without pupils in the eyes.

The symbols on the left represent the sun, moon, and rain. But far from being simplistic, these symbols have been incorporated into in-depth accounts of creation. For example, the below fragment of “The War between Dong and Shu”, one of the most important myths to the Naxi, reads: “In the old times, when the sky and the earth had not still been formed, the sun and moon had still not been created, the stars had still not arisen, mountains and ravines had not still been formed, trees and stones had not still arisen…”

Historically, the Dongba script was used by the Dongba priests, and the creation and development of the script is closely connected to the emergence of the Dongba religion.  The Dongba religion was rooted in the beliefs of the Tibetan Bön religion – the word “Dongba” literally means “wise man” in the Naxi language. Historians have traced origins to a Bön shaman from eastern Tibet named Dongba Shilo, who lived in a cave near Baishuitai 900 years ago.

Bön lamas are believed to have settled among the Naxi as farmers, and to have begun to practice exorcisms as a way of earning a little money on the side. By the early nineteenth century, the Dongba priests had created a huge religious vocabulary accompanied by a variety of rituals.  Their scriptures contain several kinds of rituals and also legends, poetry, prayers, astronomy, medicine, and divination. As Zhu Bao-Tian, a noted cultural anthropologist from the Yunnan Provincial Museum in China, said: “The Naxi manuscripts are a living fossil for the study of ancient culture”.

Although today many Naxi are not religious, in the 1940s there were more than 4,000 Naxi Dongba priests. Their religion was characterized by a fascination with power and miracles, and belief in a multitude of gods and demons who could be manipulated with magic. However, the numbers of Dongba priests drastically declined following the communist revolution in China in 1949, during which thousands of manuscripts were destroyed and a war was declared on teaching language and traditions that were considered “superstitious.” It is estimated that today there are only about 60 Dongba priests remaining who can read and write the Dongba script. Most of those priests are over 70 and they are afraid that when they die, the traditions and writing of their people will die with them.

Today, the incredible pictographic Dongba script is nearly extinct, though a revival has recently occurred. Over 30 books have now been published with instruction on how to read the Dongba symbols. Young students regularly visit the Lijing Dongba Museum to learn about the language, while others study the script full time.

Since 1998, the people from Lijiang have been receiving free tuition on the Dongba language, culture and dancing, with the goal of transmitting this ancient knowledge to the coming generations.

*Image of Naxi script by Mulligan Stu via Flickr