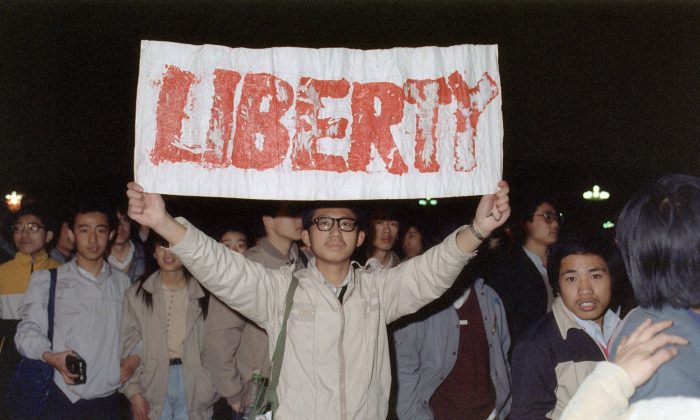 Student displays a banner with one of the slogans chanted by the crowd of some 200,000 pouring into Tiananmen Square 22 April 1989 in Beijing in an attempt to participate in the funeral ceremony of former Chinese Communist Party leader and liberal reformer Hu Yaobang during an unauthorized demonstration to mourn his death. (Catherine Henriette /AFP/Getty Images)
China

WASHINGTON—The Tiananmen Square massacre occurred 26 years ago this week when protests peacefully demanding political reform and democracy swelled throughout the country. While the protests were centered in Beijing, they spread to other cities as well. The violence on June 4, 1989, resulted in the death, arrests, and exile of many young Chinese and scarred a generation, leaving it fearful to speak out.

“Tiananmen Square has come to symbolize the persistent and brutal lengths the Chinese Communist Party will go to remain in power,” said Christopher Smith (R-N.J.), chairman of the Congressional-Executive Commission on China (CECC).

On June 3, the CECC held a hearing and invited witnesses on China in 1989 and 2015: Tiananmen, Human Rights, and Democracy.

Smith criticized the China regime for enforcing a collective “amnesia” of the Tiananmen protests and the killing of peaceful protesters. He noted that many people in China were arrested last year for trying to observe the anniversary.

Co-chairman of the CECC Sen. Marco Rubio (R-Fla.) said in his opening statement, “To this day the precise number of resulting casualties is unknown, and more than a quarter-century later there has been no movement toward a public accounting of the events of that week. Rather, those seeking to commemorate the dead are harassed, detained, and arrested.” Rubio was not physically present but submitted his statement for the record.

An inquiry into what happened late at night on June 3 and on the following day, and the number killed, is unlikely in the near future. Instead of enacting the reforms and freedoms that the students died for, the reverse is happening. The Chinese people cannot safely discuss democratic ideas today.

In general, the current comprehensive crackdown is seen as the worst since the 1989 Tiananmen massacre.
— Dr. Teng Biao, renowned China human rights lawyer

The killing did not end in 1989, said Teng Biao, a renowned Chinese human rights lawyer.

“Many innocent citizens labeled ‘Tiananmen thugs’ have been executed. In custody and repatriation centers, prisons, re-education through labor camps and various black jails, countless deaths have been due to state violence. Citizens die at the scene of forced demolitions. … Since 1999, at least 3,850 Falun Gong practitioners have been cruelly tortured to death,” he said.

Recently, the tightening on dissent has increased considerably. “More than 1,500 human rights defenders have been arrested and detained,” many of whom did not engage in politics, Teng said. Many NGOs have been shuttered and some lawyers have been disbarred, jailed, tortured, and disappeared, he said in his written testimony.

“In general, the current comprehensive crackdown is seen as the worst since the 1989 Tiananmen massacre,” said Teng.

Public political debate and thought-suggestive microblogs are but a shadow of what they were in 2010 and 2011, said the Freedom House report, “The Politburo’s Predicament,” released in January and cited by Rubio. “Detentions have largely silenced charismatic, credible, and popular critics like the activist lawyers Xu Zhiyong and Pu Zhiqiang, stalling the momentum of reformist civil society initiatives.”

Yang Jianli, president of Initiatives for China, spoke of the recent trend in the past three years for the regime to suppress free speech and placed even moderates in jail. “Dissidents who used to enjoy some limited personal freedom are now all behind bars,” he said. He highlighted three dissidents: Xu Zhiyong, Cao Shunli, and Gao Yu.

Xu Zhiyong, one of the founders of the New Citizens’ Movement and a scholar on constitutionalism, called for regime officials to reveal their personal assets. In January, he was sentenced to four years imprisonment for “gathering crowds to disturb public order.”

Ms. Cao Shunli was detained by police and persecuted to death on March 14, 2014. She had submitted detailed reports on behalf of Chinese petitioners to the United Nations Human Rights Council’s Universal Periodic Review in Geneva.

The 71-year-old Ms. Gao Yu is a well-known journalist, who was on her way to a private gathering in Beijing to commemorate the 25th anniversary of the Tiananmen massacre when she was arrested last year. After one year of illegal detention, she was sentenced to a seven-year prison term on the charge of leaking state secrets overseas.

The “crime” alleged was passing on “Document No.9” to Ho Pin, who published the document and who coincidentally testified at this CECC hearing. Document No.9 contains the warnings alluded to above regarding the “dangers” of Western constitutionalism, separation of powers, free press, and more.

Though one could question whether this was a crime, Gao Yu was innocent of the charge. Ho Pin, founder of Mirror Media Group, swore in an affidavit prepared for Gao’s trial that he received Document No. 9, not from Gao, but from a party propaganda official, according to his op-ed in the NY Times that was entered into the CECC hearing’s record. Unfortunately, the Chinese Consulate in New York refused his notarized statement, Ho wrote in the op-ed.

Ho said that Gao Yu is not an isolated case. “More and more writers, thinkers, and human rights lawyers are being illegally detained and imprisoned.”

The daughter of Peng Ming, who is serving a life sentence in a Chinese prison, was at the hearing. Lisa Peng said she has a hard time remembering her father, whom she hasn’t seen in 11 years, and whom she reported is in very poor health. Her father, an environmentalist, economist, and human rights activist, was illegally kidnapped in Burma by the Chinese secret police in 2004.

Several speakers noted an increase in thought control. The Freedom House report found that repression has been extended to previously tolerated activities and topics. News related to public health and safety has become “among the most targeted topics of censorship directives.”

The Freedom House report also noted a revival of practices reminiscent of the political campaigns of Mao Zedong during the Cultural Revolution. National televised “confessions were employed against online opinion leaders and journalists, adding public humiliation to the formal punishments they faced,” states the report.

In preparing the “The Politburo’s Predicament,” Freedom House analysts used hundreds of official documents and speeches and the research of scholars and think tanks as well as conducted 30 interviews of lawyers, commentators, scholars, and others.

The propaganda and brainwashing by the CCP has made many Chinese, including overseas Chinese, unable to think independently, according to Yang. For example, the CCP propaganda says to unwitting Chinese, “The crackdown on Tiananmen Movement by the CCP was the last resort by the Chinese government. Without clearing of Tiananmen Square by the tanks, there wouldn’t have been the economic achievements today.”

Teng, Smith, and Rubio viewed with alarm pending legislation in China that will severely restrict the operations of foreign NGOs. Teng said many NGOs will have to leave China. Public security bureaus, instead of civil affairs bureaus, will be given the power to ratify and supervise foreign NGOs.

Ho Pin blames much of the problem on too much willingness on the part of the West to pursue short-term economic interests while ignoring the Chinese people’s plight. “Western corporations scrambled to do business with China regardless of the record of human rights violations.”

Ho Pin said, “Ironically, China which screens, censors, and bans any print and electronic publication, has been invited to serve as the country of honor at book fairs in Frankfurt, London, and New York!”

Rubio wrote that the president could instruct every U.S. government agency participating in dialogue with China to bring human rights to the forefront with their Chinese counterparts, to present them with lists of political prisoners and press, by name, for their unconditional release. The Administration can take proactive steps today to impose visa bans on Chinese government officials who are perpetrators of grave human rights abuses,” he said.

Chairman Smith said he introduced the China Human Rights Protection Act of 2015 (H.R. 2621), which will “deny U.S. entry visas and issue financial penalties to any Chinese official who engages in gross violations of human rights,” such as torture, prolonged and arbitrary detention, forced abortions and sterilizations, or organ harvesting from prisoners.

Teng recommended ceasing cooperation with Chinese-regime organized NGOs, which help the regime suppress human rights and freedom, he said. Support the real NGOs and give out awards to prominent activists, he suggested.