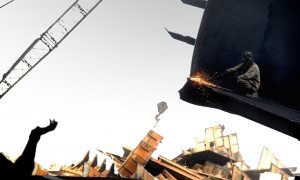 Some of the most popular internet services, like Facebook or Google Drive, are free—but they come at an environmental cost.

There’s no fee for users to store a practically infinite number of family photos, emails, documents, and cat videos in the cloud. But as ethereal as the “cloud” may sound, it is made of a staggering number of machines that require real energy to operate.

The internet is currently responsible for about 2 percent of the globe’s overall power consumption. But the internet’s share of power use is increasing much more quickly than other users’.

If it continues to grow at the current rate, “the internet will choke the planet in terms of power consumption,” said Kerry Hinton, director of the Centre for Energy-Efficient Telecommunications at the University of Melbourne in Australia.

“It’s just not sustainable,” he said.

Without a major change, Hinton estimates that in about 15 years the internet will be responsible for 20 percent of global power consumption.

A 2014 report by Dell EMC on the growth of the “digital universe” expressed it well: “Like the physical universe, the digital universe is large—by 2020 [it will contain] nearly as many digital bits as there are stars in the universe. It is doubling in size every two years, and by 2020 the digital universe—the data we create and copy annually—will reach 44 zettabytes, or 44 trillion gigabytes.”

Global e-Sustainability Initiative (GeSI), an information technology industry group, estimates that an additional 2 billion people will hook up to the internet by 2020. It is seen as a major tool for developing countries, and GeSI describes internet technologies as connecting users with the “knowledge economy.”

While the internet can have many benefits, including ecological ones—from helping educate and mobilize people on environmental issues, to helping run a smart grid—it also has a big footprint.

Jonathan Koomey of the Lawrence Berkeley National Laboratory estimated in 2008 that the internet uses 9 to 16 kWh of energy for every gigabyte (GB) of data transferred. Let’s translate that into terms of everyday usage.

If you spend one hour streaming a video on Netflix, you’ve transferred about 1 GB of data (and that rises to 3 GB if it’s a high-definition video). So, using Koomey’s estimate of energy use per GB, the energy you use for every hour of video streaming is comparable to using a hairdryer for 30 minutes per day for a year, or to running a window unit air conditioner for 16 hours.

Netflix streams more than a billion hours of video per month, according to the 2014 Dell EMC report. That would mean, again using Koomey’s estimate, that Netflix could use more than 9 billion kWh per month, which is comparable to the energy used by about 1 billion U.S. houses in a month.

Hinton noted that some of the complexities of Netflix’s operations may make this estimate inaccurate, but it still illustrates how much energy can be used in transferring data through the internet. Koomey’s estimate was also at best a rough approximation, as he and coauthor Cody Taylor of ICF International noted in their paper, “Estimating Energy Use and Greenhouse Gas Emissions of Internet Advertising.”

Estimating isn’t an easy task and methods vary a lot. Some include, for example, the energy spent on manufacturing the laptops or smartphones used to access the internet. Some don’t include the energy spent starting up a computer or establishing a connection, but only the single act of transferring data. Koomey and Taylor’s estimate is on the higher end and a few years outdated, but the exercise is instructive.

A report by computer security software company McAfee on the energy expended by email spamming also gives a rough idea of how much energy some common online activities use. When a major source of online spam, McColo, was taken offline in 2008, the energy saved in the lull before it rebuilt and continued operations was comparable to the amount of energy needed to power 2.3 million cars, McAfee reported.

How the Internet Physically Works

We often don’t think of the internet in terms of its physical functioning. It’s almost magical. You push a few buttons and you’ve sent a message or photo across the world.

According to Hinton, here is what physically happens when you upload a photo on Facebook. The data that makes up that photo is sent from your device through your home router or other connection. This is the most energy-consuming part of the whole process, especially if you’re using a 4G or LTE high-speed wireless connection on your smartphone. The towers that power such a connection use a lot of energy.

Your photo is then pooled with data from other users through your local internet provider in what’s called the edge network. Then it travels—sometimes through thousands of miles of fiber-optic cables under the ocean—to the gigantic routers that are basically the core of the internet, built by major tech companies like Cisco.

It then heads to a data center. Photos there fall into three categories: hot, warm, and cold.

Let’s say it’s the day after a party and you and your friends have posted photos. A lot of people are looking at them; those photos are hot. They are on a disk in the data center that is constantly spinning. It stays spinning so that it’s ready for people to access it instantly. That spinning requires energy.

A few weeks later, some people are still looking at the photo but not as often. The photo is then “warm” and it is kept on a disk that spins only occasionally, requiring less energy.

In a year, hardly anyone looks at the photo and it has become “cold.” It then exists on a tape or optical disk. When someone wants to look at it, a little robotic arm is activated and goes to the disk, picks it up, and puts it on a plate to play it, something like an old-school record player.

Such a disk can store a photo like this for dozens of years. Though it’s a relatively low-energy form of data storage, when billions of users are storing photos, documents, and other files year after year in the cloud, it all piles up in data centers that expend energy.

Each photo is copied several times, Hinton explained. Partly, this is to ensure stability if one server is taken offline. Partly, it has to do with needing the photo in various forms, such as a thumbnail format. Emails are similarly copied by email providers.

Google, Facebook, and many other companies have invested millions in renewable energy to offset the use at their data centers. As Greenpeace noted in its 2015 report “Clicking Clean,” it can be hard for these giant data centers to use renewable energy themselves, because they often have to take whatever the local utilities offer.

For example, Greenpeace named Virginia as “ground zero for the dirty internet.” The report states: “Virginia remains the epicenter of data center growth in the U.S. Loudoun County, in Northern Virginia, boasts that up to 70 percent of global internet traffic passes through its borders on a daily basis.”

The local utility, Dominion Resources, relies almost exclusively on “dirty sources of generation,” according to Greenpeace.

Some data centers, however, are sourcing renewable energy themselves. Facebook broke ground on a new center in Los Lunas, New Mexico, in October, that it says will run on 100 percent renewable energy.

Because data centers, internet providers, and many of the big internet players have a financial interest in cutting down their power bills, they are relatively energy efficient, Hinton explained.

“If we measure the energy efficiency of these things by looking at the amount of energy it uses to process one bit of data, what you find is that the machines in the core of the network, they are super, super energy efficient,” he said. “They can switch a bit of data with nanojoules of energy. That’s one billionth of a joule of energy.”

It’s about the billions of users who don’t see such a huge impact on their power bills, who are thinking more about the functions offered by their devices and the speed of their internet connections than their power consumption. That’s how the internet’s energy footprint makes its deepest impression on the world.