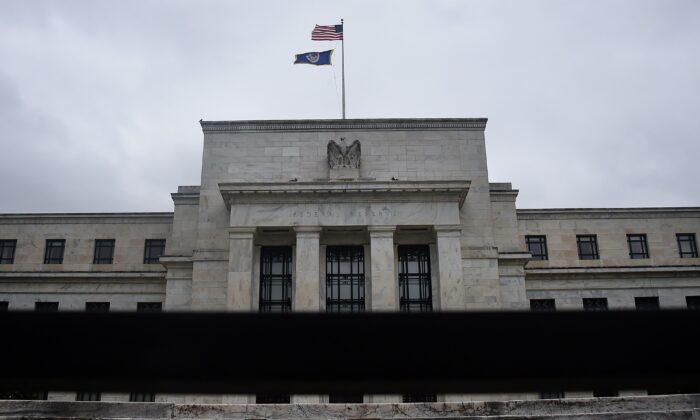 The Federal Reserve building is seen through a fence in Washington, D.C., on June 17, 2020. (Olivier Douliery/AFP via Getty Images)
Business Columnists

The Inflationary Damage Won’t Be Fixed

The public loathing of the current price increases cuts across all party and demographic lines. Many people express the same longing: “These prices have to go back to normal. It’s killing me. Surely, things will settle down.”

This is a widespread hope born of disbelief over what has happened in such a short period of time. Surely, this cannot last!

Bad news: There will be no going back. Yes, some price increases will pull back and others will rise but think of this as a ship with a leak in the hull. Even if it gets plugged, the boat will still be full of water and it will forever slosh from one part to another.

That is, unless it is bailed out. In the case of the current inflation, the only hope is plugging. There will be no bailing.

This simple point is often lost under a flurry of data that most people can’t begin to follow. At some point in the future—when is anyone’s guess—the media will triumphantly announce that inflation is falling. Currently, the Consumer Price Index stands at 8.6 percent year-over-year. If that rate of increase moves down to 8 percent, talking heads will crow that Biden is taming inflation.

This is seriously misleading. A decline in the rate of increase is still an increase. Everything will still be getting worse, just at a slower rate. The language here really matters: It’s not a decline in inflation if prices are still rising.

This is what’s so absurd about the Federal Reserve’s supposed target of 2 percent. If the Fed actually achieves that, it will do nothing about fixing the existing damage. It would only mean that the worsening of the real declines in purchasing power will happen more slowly. In order for prices to be frozen at their current levels, whether at the wholesale or retail level, the rate of increase would have to fall to zero.

Just to be clear, because this isn’t entirely obvious to most people, an inflation rate of zero would mean that all the increased prices you see around you would, in general, remain in place, even if some prices rise and others fall.

Here’s a picture of the purchasing power of the dollar from the beginning of lockdowns in March 2020. It’s the largest decline in the domestic value of the dollar by far in 40 years.

The value of the dollar at the beginning of Reagan’s second term is now only 34 cents. That damage is done. If the Fed magically hits its target, the present realities will persist and only worsen at a slower rate.

We’ve already discussed at length precisely why this happened. Congress, over two years, authorized some $6 trillion in payments to individuals and businesses, all of which were funded by debt instruments created by the U.S. Treasury and purchased by the Fed with newly printed money. To simplify a two-year process, we woke up with new money in our bank accounts but when we went to spend it, we found the prices had gone up enough to make our new riches meaningless.

Let’s play a game of pretend and imagine a world in which things really do go back to where they were in 2019, as many people hope will happen. What that would require is a 15 percent drop in actual prices across the board to fix the problem. There is simply no scenario under which that would ever happen. It’s truly inconceivable.

To be sure, it should happen. There’s nothing inherently wrong with falling prices, the inverse of which is an increase in the value of money. Under normal market conditions with sound money, this would be expected and good because it rewards savers and feeds long-term investment. For weird reasons, however—and this has been true since the 1930s—the Fed believes that this would be the worst possible fate. Institutionally, the Fed will feed inflation no matter what to prevent that scenario.

The Fed is completely incorrect on this point. Falling prices—rising purchasing power—should be a norm. For the five years between 1872 and 1877, consumer prices fell 12.3 percent. Between 1882 and 1885, prices fell by a further 13.8 percent. From 1892 to 1894, prices dropped 3.6 percent more. This entire period is known as the golden age of U.S. economic growth because the dollar was gaining ever more value, which is a win for consumers and producers.

It was during this same period that life in the United States was transformed, with the arrival of flight, internal combustion cars, and the mass availability of steel to build skyscrapers and long bridges, not to mention indoor plumbing, electricity, the fossil-fuel boom, and new communication technologies.

The handmaid of all of this was sound money.

A striking case of an economic crisis that didn’t involve Fed intervention with “quantitative easing” was 1920–22. In just two years, prices fell by 17.8 percent. The result was a fabulous economic recovery. This “deflation” wasn’t injurious, but healing.

I cite these cases just to make the point that it wouldn’t be unprecedented for the Fed to get to work attempting to fix the damage it already has done. And truly today, prices would need to fall about 15 percent to restore the status quo ante.

This won’t happen simply because the Fed still is spooked by the experience from 1930 to 1933, when prices fell 28 percent. At that same time, a new theory of economics took hold that claimed that the falling prices were a cause of the crisis rather than being a blessed symptom that the crisis was solving itself. Since those days, monetary policy has been conducted with the assumption that falling prices would be a disaster.

All of which is to say: There will be no going back. Even if the Fed hits its target, the damage is done. This is your new world. The prices you see today will on average persist, and that’s the best scenario of possible outcomes. The worst is for inflation to worsen, and that is a more likely scenario.

Everyone is looking to the Fed now to solve the inflation problem but this can’t happen, even under the best possible conditions. That’s because the problem goes well beyond money printing. We have all experienced the great economic shock in world history with lockdowns and massive global breakdowns in supply chains, and the resulting loss in business confidence and mass worker demoralization.

Recall that the glory days of the 1980s weren’t entirely prepared by Paul Volcker at the Fed. Yes, he cracked down on the loose-money policy at the Fed and that was essential. But just as important were mighty changes in industrial regulation policy and large tax cuts that inspired investment. The media at the time never wanted to give the Reagan administration credit for anything, but the truth is that the economic boom of the 1980s wouldn’t have happened without these revolutionary changes in policy.

Today, we are suffering under the yoke of an administration that nearly daily calls and works for the end of fossil fuels, which supply 85 percent of America’s energy needs. It’s hard to fathom a more irresponsible and destructive policy. This is like taking aim on prosperity itself and repeatedly pulling the trigger. And they wonder why we are on the edge of recession alongside terrible inflation!

Getting back on the right track again will be an enormous undertaking, something that seems impossible under the existing regime. We need a Fed that lets go of its phobia of falling prices, an end to the attack on business, a tax environment that is newly friendly to enterprise, a restoration of the rule of law, and a dramatic curbing of the discretionary power of the administrative state.

It’s the only way out of this crisis.