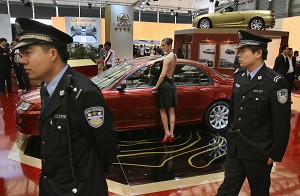 Chinese police walk past MG cars in the Nanjing Auto companies display at the Auto Shanghai exhibition, 21 April 2007. Nanjing Auto's MG brand, bought from Britain's defunct MG Rover group, will spearhead the Chinese company's efforts to export cars to Europe in the second half of the year with sales in China getting underway at the same time. (Mark Ralston/AFP/Getty Images)
China

The Illusions of Progress in China

There are many incentives for people to see the Chinese regime in the most favorable light.

We depend on Chinese industry for cheap consumer goods, and much of our investments are tied to China's economic success.

If you are a scholar, journalist, or a businessman, you may have established ties with the Mainland that you don't want to see disrupted or terminated.

As a consequence, the primary role of the Chinese Communist Party—its controlling nature and inability to reform itself—may be overlooked when outsiders want very much to perceive the Chinese as like ourselves.

The difficulties in being objective regarding China and its dominating Communist party were apparent at a conference on May 2, held at the Peterson Institute for International Economics in Washington, D.C., and co-sponsored by the Center for Strategic and International Studies (CSIS). The conference centered on the publication of The China Balance Sheet in 2007 and Beyond.

Although the emphasis was on economics and trade issues, one session was devoted to the “social and political scene” that underlies the economic system. China's incipient legal system was the focus of the scholars invited to this session, who hope that China would evolve into a state where the rule of law held sway.

Carl Minzner, from the Council of Foreign Affairs, led off the discussion with a description of the rising social unrest in China and its causes.

Official statistics from the regime itself state that riots, strikes, demonstrations, protests and the like increased from 8,700 in 1993 to reach 87,000 in 2005. Citizen petitions of groups seeking to have their grievances addressed by high level officials likewise increased tremendously.

These petitions and protests are mostly directed against local decisions in the hope of triggering the intervention of high-level officials in resolving their grievances.

What is causing the pervasive social protests and petitions in China? Minzner highlights official corruption, excessive taxation, unpaid back wages, and inadequate compensation for laid-off workers. “Since the late 1990s, government seizures of village land and urban housing for development projects have become increasingly important as a cause of citizen protests and petitions.”

Minzner cites sources that the protests over land seizures surpassed tax protests as the most important source of rural unrest.

Faced with rising social unrest, what can the Chinese rulers do? Minzner states that more political input by citizens would take some of the pressure off, and an independent legal judicial system would provide a peaceful way to resolve grievances against local officials.

However, there is little sign that the Chinese Communist authorities are moving towards political liberalization. Instead, they try to repress it, for example, with the use of “responsibility systems” that “apply increasingly severe disciplinary measures to local officials that experience larger or more frequent protests.”

An independent judicial system is nowhere in sight either. And getting independent legal counsel in China is problematic.

Jamie Horsley, from the China Law Center, Yale Law School, and another speaker at this session, mentions in her paper how Gao, who she does not refer to by name but as a “prominent lawyer,” was convicted of subversion for taking on controversial cases, including representation of Falun Gong practitioners. She quotes Gao, “…you cannot be rights lawyer in this country without becoming a rights case yourself.”

Horsley says up front that China today does not much resemble a “rule of law” society, citing a similar litany of illegal acts that Minzner mentions, and adds, the “harsh and arbitrary criminal justice system” that is “still plagued by the use of torture.”

It allowed local elections for village committees, but they have squashed local experiments of democracy at higher levels, and “have maintained tight control of the nomination and selection of candidates to screen out individuals who might challenge the party control.”

China Scholars Seduced by the Communists

Both scholars, Minzner and Horsley, assume political liberalization and reform is the answer to the social unrest and pathway for further progress. Minzner says it is “the absence” of an independent judiciary, meaningful electoral channels and media controls that are behind the increased social unrest. The U.S. policymakers should try to reason with the Communist officials why reform is in their best interest, according to Minzner.

Horsley goes a step further and speaks of “incremental progress” in the rule of law in China, pointing to the recent expansion of administrative law, which can restrain the arbitrary exercise of state power.

However, is there really hope for reform and has there been the progress that these scholars say? Other China watchers have recently written that scholars like these two who appeared at the IIE conference last week are still deluding themselves because they don't want to see the true nature of this regime. Take, for example, Carsten Holz, writing in the Far Eastern Economic Review (April 2007). Professor Holz is an economist and professor in the social science division of the Hong Kong University of Science and Technology.

Holz warns scholars about becoming trapped by the language the Party uses to project a positive image. For example, we speak of the Chinese “government,” when the Party's structure parallel's the governments, e.g., the staff of the Personnel Ministry is virtually identical to the staff of the Party Organization Department, etc.

“Does China's government actually govern China, or is it merely an organ that implements Party decisions?” asks Holz, who claims that a more appropriate word than “government” is “mafia.”

In the discussion above on the social unrest in the countryside, Minzner didn't question the party terminology of 'social stability.' “But is a country with more than 200 incidents of social unrest everyday socially stable, and its society harmonious? Or does 'socially stable' mean no more than acceptance of the rule of the mafia?” asks Holz.

“Local government bad, central government good” is another propaganda truism that is accepted unquestionably in the foreign research community…” says Holz. Minzner conceptualized his presentation as one of local citizen taking their grievances against local cadres to the top, which places the blame where the central authority wants it. Minzner spoke of the U.S. and the Communists having a common interest in addressing China's “problem” of social unrest.

The West tends to misread China's intentions, according to Guy Sorman, who recently wrote in the City Journal (Spring 2007), “The Empire of Lies.” He points out that a friend of his, an internationally well-known economist, Mao Yushi, in 2004, sent a polite petition, signed by 100 fellow intellectuals, to the Chinese regime, requesting it to apologize for the 1989 Tiananmen Square massacre, and thereby help alleviate the tragic past.

He lost his university position and was placed under house arrest. It's been 18 years since the massacre and yet the Communists are incapable of coming to terms with it. This does not bode well for the reform and liberalization that the China scholar apologists are holding out for.

The scholars may be seduced by the appearance of more openness in the Chinese media, but always when the corruption or environmental degradation is discussed, the blame for these things is “fixed at the local levels and there is no challenge for the top power,” said Professor Perry Link of East-Asian Studies at Princeton University and co-translator of the Tiananmen Papers. Dr. Link was speaking at a forum in Rayburn House Office Building, May 1.

The forbidden topics that cannot be discussed in an open honest way are: Taiwan, Tibet, Xinjiang, Falun Gong, the Beijing massacre of 1989, and the Chinese Democratic Party. Other banned topics include the Cultural Revolution, the great famine during that time, other things done by Mao, which can only be referred to in the prescribed way. Protests including riots and demonstration by farmers and workers in contemporary sense cannot be reported honestly.

“Some of the perceptions in the western world that things in China are loosening up within [the core power center]; that is wrong, that is just wrong, the inside is tighter now, even tighter than five years ago,” said Dr. Link.