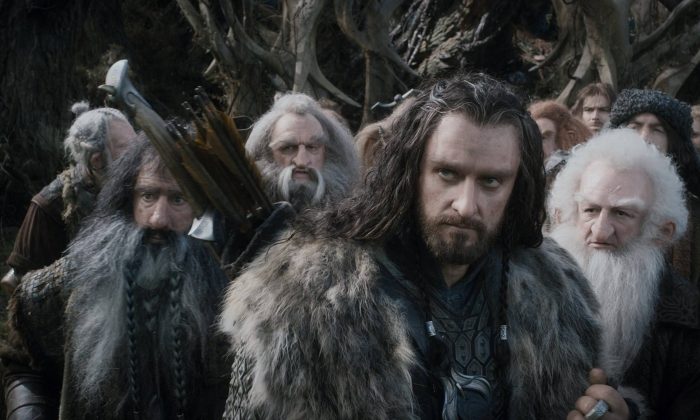 A screen still from a scene in The Hobbit. (Warner Bros.)
Entertainment

The Hobbit 3: Sauron, Aragorn, and Frodo to be in Lord of the Rings ‘Battle of Five Armies’? (+Release Date)

Sauron could make his first appearance in the upcoming “Hobbit 3: Battle of Five Armies,” according to a new report.

The film, which will cap off the Hobbit trilogy, will hit theaters on December 17, 2014.

Peter Matthews of Movie Pilot says that Sauron could make his first appearance in the film.

“Allegedly, Sauron will turn his dark eye on Gandalf, and we may even see the return of the uncorrupted Saruman, who could come to his fellow wizard’s aid,” he said.

The report also says that it’s possible that Aragorn (Viggo Mortensen) or Frodo (Elijah Woods) could appear in the film.

“Unfortunately, unless it is being kept seriously under wraps, it doesn’t look like Viggo Mortensen’s Aragorn will make an appearance in The Hobbit 3, but might we see Martin Freeman’s Bilbo Baggins share a scene with Elijah Woods’ Frodo?” Matthews wrote.

So far, major spoilers haven’t emerged for the film, only speculation such as the comments from the movie blog.

A trailer is expected to be released soon.

Meanwhile, the film has launched a marketing contest that will have the winner travel to New Zealand and watch the conclusion to the trilogy with director Peter Jackson.

“hose who meet the challenge will be entered in a competition to win a once-in-a-lifetime journey to experience the cinematic Middle-earth in New Zealand, and watch the Trilogy’s epic finale, The Hobbit: The Battle of the Five Armies, with director Peter Jackson,” it said.