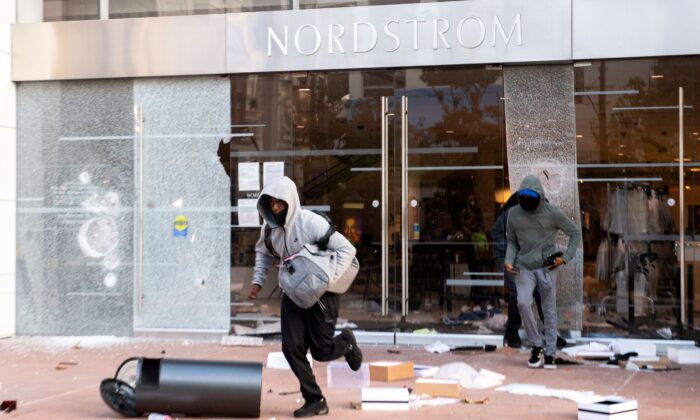 Thieves are seen looting stores at the Grove shopping center in the Fairfax District of Los Angeles, Calif., on May 30, 2020. (VALERIE MACON/AFP via Getty Images)
US News

The massive wave of retail thefts in the United States over the past two years have become a major challenge for both the retail industry and law enforcement.

Weakened law enforcement policies and lesser penalties for these criminal bandit gangs have hit a critical juncture, as crime in the United States has hit proportions not seen in three decades.

The number of increasingly professional organized retail crime (ORC) rings and their frequent attacks have reached crisis scale, according to the National Retail Federation (NRF) in a Sept. 14 report.

These crimes have hurt thousands of businesses and have contributed to higher prices for consumers and loss of key retailers in many communities, as countless stores have closed to due to lack of security.

“The factors contributing to retail shrink have multiplied in recent years, and organized retail crime is a burgeoning threat within the retail industry,” said Mark Meadows, NRF vice president for research development and industry analysis.

A Spike in Organized Thievery

The NRF found that the average shrink rate in losses for 2021 was 1.44 percent, a slight decline from the previous two years, but comparable to the five-year average of 1.5 percent.

Acts of fraud are being reported across all venues, ranging from brick-and-mortar stores, e-commerce, and omni-channel platforms since 2020.

A sudden increase store violence is another growing area of concern, such as random attacks on store personnel, robberies, and ORC gangs.

The majority of surveyed retailers reported a 89.3 percent increase in violence and a 73.2 percent uptick in shoplifting.

The reported incidents of both ORC and employee theft rose 71.4 percent, much of it involving organized crime or for the gangs’ own benefit.

The NRF said that respondents reported that ORC robberies have risen 26.5 percent since the onset of the pandemic.

In search of solutions, retailers are boosting spending on theft-prevention measures.

The NRF survey showed that 60.3 percent of retailers are increasing their security budgets.

At least 52.4 percent are increasing their investments in technology, such as radio frequency identification tags and readers, computerized security scanners, and license plate-recognition devices.

Wealthy liberal enclaves throughout the country with district attorneys thought of as “soft on crime” appear to be the regions most affected by the crime wave and which has only grown worse since the pandemic.

The top five metropolitan areas affected by store bandit gangs in the past year were the Californian cities of Los Angeles, San Francisco, and Oakland; New York; Houston, Texas; and Miami, Florida.

Retailers across the country are calling for stronger legislation, especially at the federal and state level, along with better enforcement of existing laws to quell increasing acts of violence and theft, which are hurting their survival.

The U.S. Chamber of Commerce demanded earlier this year that Congress take action to address the rise of ORC crimes, calling them a “national emergency.”

“Retail theft is becoming a national crisis, hurting businesses in every state and the communities they serve,” said Neil Bradley, the U.S. Chamber of Commerce’s chief policy officer, in a letter to Congress in March.

“We call on policymakers to tackle this problem head-on before it gets further out of control. No store should have to close because of theft.”

Los Angeles County Sheriff Alex Villanueva blamed radical Democrats and prosecutors, saying that they “live in this ‘woke palace’ where they’re not affected by the policies, but the average person IS impacted by them.”