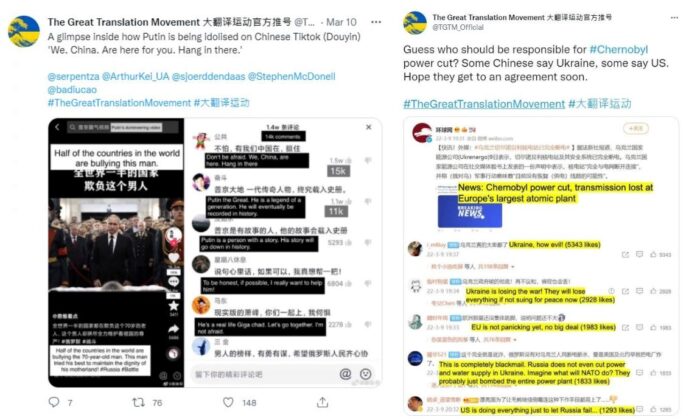 The Chinese Communist Party’s (CCP) “Great Firewall” has long controlled public access to uncensored information on the internet and thus opinion within China, imbuing its citizens with values that differ from the universally accepted ones. However, a new grassroots movement is pushing to unveil the CCP’s domestic propaganda to the Western world.

The “Great Translation Movement” started in China after Russia invaded Ukraine, translating what the CCP tells its citizens into foreign languages and making it available on various online forums abroad.

The movement was initially started by ChongLangTV, the largest Chinese community on the American social news and discussion platform Reddit. Reddit later took down the channel.

However, loosely organized accounts on social platforms like Twitter and Facebook have taken it upon themselves to continue the translation effort, with the core idea of exposing what the CCP is truly telling its people about the Russian invasion of Ukraine versus what its officials say to the world.

Due to the internet blockade and limited information being available to foreign reporters or diplomats, Western media don’t often get the CCP’s actual position on a matter or the complete picture of what the CCP shows or tells its people within its borders.

As the world condemns Russia for its actions, there exists a pro-war, pro-Russia, and anti-American sentiment on the Chinese internet space. Rather than publicly condemning the aggressor, the Chinese media space is filled with videos and posts supporting Russia and disparaging Ukraine.

Participants of the Great Translation Movement collect the pro-Russia content from major Chinese platforms such as Weibo, Bilibili, and Zhihu, translating it into foreign languages and then posting it on foreign forums or media platforms.

The movement appears to be taking off and has gained many supporters worldwide.

Pincong is a Chinese internet forum with a U.S.-based main server. It focuses on discussing sensitive political topics or current affairs, and is blocked in China by the Great Firewall.

Mr. Chen, the administrator of Pincong, told The Epoch Times that the CCP is maliciously targeting the website for supporting the Great Translation Movement.

“Pincong is not the initiator of [the movement] … but a supporter. It is now being attacked [by the CCP] like never before,” Chen said. “However, even if we didn’t support the movement, we’d still be subjected to cyberattacks because we have long been a thorn to the CCP.”

Chen said that the Pincong forum has been threatened and harassed by the CCP for allowing discussions of sensitive political topics on the site. The site was allegedly subjected to thousands of malicious Chinese IP attacks daily, which increased since it started supporting the Great Translation Movement.

After Russia invaded Ukraine, Pincong.com set up a special forum for the Great Translation Movement on its homepage and published rules encouraging users to distribute screenshots of content from Chinese sites to foreign audiences while maintaining the safety of their personal information.

China’s largest question-and-answer website “Zhihu” was once taken down by the Cyberspace Administration of China for discussing sensitive political topics and current affairs. As a result, many “internet refugees” flocked to Pincong as its main server is based in the United States and not subject to the CCP’s internet censorship.

Pincong’s server does not record users’ IP addresses to ensure their privacy. Email and phone numbers are also not required when registering.

“For a non-profit website, the more practical approach is … to avoid phishing behaviors that ask for users’ personal information, and implement countermeasures [against the CCP’s cyberattacks].”

However, Chen said that one of the website’s server maintainers based in China has been missing for more than four months, speculating that the Chinese authorities may have arrested the person.

“Pincong used gift cards donated by the users to pay its server providers in China. There may have been spies working for the CCP among the donors, who may be able to obtain the server provider’s IP address,” Chen added, breaking down a possible reason for losing one of his server maintainers in China.

The CCP mainly controls its official image through the selected information it makes available to the free world. However, the Great Translation Movement has threatened its ability to contain the external narrative.

U.S.-based China affairs commentator Tang Jingyuan told The Epoch Times that the CCP has always had two sets of propaganda for internal and external use.

Domestically, the CCP incites and manipulates public opinion to support Putin’s aggression with a “great and righteous rhetoric.” Yet, it displays a neutral position when addressing the Western world, saying that it “respects the sovereignty and territorial integrity of all countries.”

Tang believes that the CCP’s two-faced responses serve to disguise its true nature, which it shows within the country. It would hurt the national interest if its true intentions were revealed. Thus, the CCP is highly concerned and disturbed by the Great Translation Movement, attempting a crackdown by any means necessary.

On March 24, the Chinese state-run Global Times published an editorial calling the Great Translation Movement “a malicious smear campaign against China on Russia-Ukraine issues that has surfaced on overseas social media.” The article went on to say that “a few Chinese-speaking bad-faith actors fed by antagonistic Western media” are behind the online translation campaign.

Ellen Wan and Xinan Li contributed to this report.