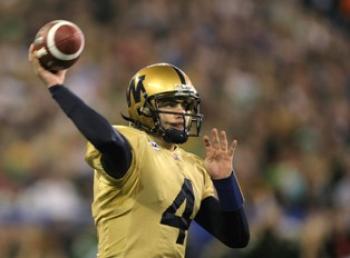 OTTAWA—In Canada we play our own version of football, but struggle to find native-born superstars. To be clear, I am talking about the game with the oval-shaped ball and 250-pound titans who sprint into each other with bumpers strapped across their faces.

We had our big game the other day, with the Montreal Alouettes battling the Saskatchewan Roughriders in the Grey Cup, our equivalent of the Super Bowl.

The Alouettes, named for a song bird and a French song about plucking the bird's feathers, took the prize.

There are some noteworthy differences from the American game. We only have eight teams, though we tried to double that with a failed expansion into the United States in the 1990s. We have three downs instead of four, our field is larger, and we have 12 players rather than 11.

There are other differences in the rules that affect strategy and the like, but to the casual observer, the games look remarkably similar.

In fact, even the players can be the same. Although a quota demands that half of each team's roster must be Canadian-born, most of the top players are from the United States.

Players imported from the United States take the league's top honor so often, the Most Outstanding Player award, that we also have an award for the Outstanding Canadian in the league.

This irony was noted by Michael Grange, a sports columnists with the Globe and Mail, Canada's equivalent to the New York Times.

After all, it is not as if Canada cannot produce its own athletic gladiators. Grange notes that Canadians such as Steve Nash and Joey Votto are top players in basketball and baseball respectively. No need to mention hockey, where our dominance is historical, but what about other sports. We took more gold medals than any other nation at last year's Winter Olympics in Vancouver, but when it comes to our homegrown game of grid iron, Canadians are too often left warming the benches.

I am not much of a football fan myself. There is too much standing around between plays, but the game is wildly popular here. However, when TSN, a major Canadian sports network, names the top 50 players in Canadian Football League (CFL) history, and only nine are Canadian, even I start to wonder.

The problem could be the historical lack of the game at lower levels; no high school in my hometown had a football team, though they are more common now. And despite a love of football, the game is not yet a part of the national fabric the way hockey is, where families will sacrifice money and Saturday mornings to get little Johnny to the ice rink.

Canadians do take the game in, but mostly in Saskatchewan, where twice in two years the players were denied the Grey Cup, but fans show true dedication, writing songs, and issuing rowdy cheers, which are famous across the country.

Maybe money is a problem, though the issue does not explain the lack of talent. In hockey, our teams will pay top money for top players, but in football, we are not even close. Few CFL players make more than the lowest paid NFL player, and top salaries are not even comparable. TSN pegs the average CFL base salary at $70,000, while the median salary for NFL players was 11 times that at $770,000, according to USA Today.

With that kind of disparity, even if there was a Canadian Joe Montana, he probably would not stick around long. Yet, after he left, we would still be sure to celebrate every pass he completed. To play basketball for the Phoenix Suns, Nash may have left his native land for sunnier prospects, but I bet that more Canadian fans would rather watch him play on a U.S. team than watch the Toronto Raptors trounce their opponents with players from our southern neighbors.