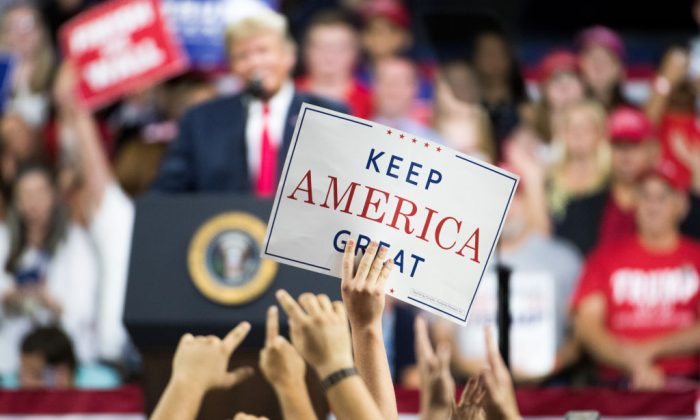 An attendee holds a "Keep America Great" sign as President Donald Trump speaks to the crowd during a campaign rally at Freedom Hall in Johnson City, Tenn., on Oct. 1, 2018. (Sean Rayford/Getty Images)
Thinking About China

The ‘Great Forgetting’: What to Do When Your Country Has an Induced Alzheimer’s

The ideological upheaval in the United States between traditional liberalism and progressivism and progressive strength is causing the “Great Forgetting”—the loss of the country’s ability to meet the challenges it once possessed. The most important of these waning abilities is how to confront and defeat great power enemies.

How Did Your Country Get Alzheimer’s Disease?

Like an Alzheimer’s patient in gradual decline, the United States is gradually becoming enfeebled and infantilized, losing its knowledge, memory, coherence, ability, desire, and willingness to meet challenges. This is partly due to the aging of the baby boomers (1946–1964) and Generation X (1965–1980), who possessed the direct experience of the fight against the Soviet Union and its allies in the Cold War.

The U.S. population and leadership either willingly or are forced to forget and become disorientated from its liberal foundations and institutions. They do so willingly if they are progressives or with considerable resignation if they are political liberals, as people are seemingly forced to go with the progressive flow.

The forced memory loss is part of the “Great Forgetting” of the knowledge, behavior, culture, skills, practices, and abilities that led to victory in America’s wars, and allowed the country to overcome economic difficulties to become the world’s greatest economic engine, become the world’s leader in science and technology, possess peerless universities and professional schools, and a standard of living unmatched. American society provided untold benefits to its citizens and the free world.

The pillars of that success, political liberalism, a willingness to forego personal gain for the good of the country, adaptiveness, creativity—what used to be termed “Yankee ingenuity”—and meritocracy are eroding. With this, and by design, comes profound loss, including the willingness to speak openly and freely about the country’s problems, coherence, and direction.

Living With Your Country’s Alzheimer’s

What is needed is a patriotic Donepezil to treat the “Great Forgetting.” The Trump administration’s 1776 Commission and similar steps in states around the country, such as Florida, are good steps forward.

But what is needed above all is documentation to make the memory of older Americans vivid to their audiences and able to be preserved in perpetuity. Historians have documented through personal interviews the difficulties and success of America’s Mercury, Gemini, and Apollo space program, wars like World War II and Vietnam, and to a lesser extent Korea, the Civil Rights movements for racial minorities, women, gays, and lesbians before and after Stonewall.

A similar effort needs to be made to document liberal political principles and Cold War experiences of typical Americans that could explain to younger generations the pride in their country Americans possessed. This would include what they were taught by their grandparents, parents, churches and synagogues, and civil organizations like the Boy and Girl Scouts.

Second, this effort should be broadened to include the following: U.S. allies’ conception of America that would explain to Americans who are Millennials (Generation Y, 1981–1996), Generation Z (1997–2012), and Generation Alpha (2012–); why the United States was admired; why it inspired millions around the world; why so many people sought to study or immigrate to America; and why it was the subject of considerable critique during the Vietnam War and in the decades after.

While most Americans know of their country’s failings, younger Americans might be surprised to learn how their country gave inspiration and courage to millions during the Cold War. Soviet dissident Natan Sharansky was imprisoned in Permanent Labor Camp 35 at that time.

He recalled his reaction to President Ronald Reagan’s March 1983 “Evil Empire” speech after Reagan’s death in 2004: “It was the brightest, most glorious day. Finally, a spade had been called a spade. Finally, Orwell’s Newspeak was dead. Reagan had from that moment made it impossible for anyone in the West to continue closing their eyes to the real nature of the Soviet Union.”

Sharansky continued: “It was one of the most important, freedom-affirming declarations, and we all instantly knew it. For us, that was the moment that really marked the end for them, and the beginning for us. The lie had been exposed and could never, ever be untold now. This was the end of Lenin’s ‘Great October Bolshevik Revolution’ and the beginning of a new revolution, a freedom revolution—Reagan’s Revolution.”

Third, memorials and museums to the Cold War, including one on the National Mall in Washington, are needed to ensure that an understanding of why the United States fought the Cold War, the dangers it incurred, and why it won is developed, sustained, and replicated throughout the country.

Remembering, reinforcing, and teaching are essential but insufficient. At root, countering the “Great Forgetting” imposed on Americans by progressives requires that older generations teach the tenets of America’s political beliefs and culture to younger ones while at the same time explaining the totalitarian, perverse, and hollow nature of progressivism.

Ultimately, it is incumbent upon younger Americans to have the courage to be receptive to the message in the face of certain and strong opposition from their peers or teachers. Every generation of Americans has had their great challenges. Aided by older Americans, restoring America’s collective memory of its greatness is a formidable one for young Americans.