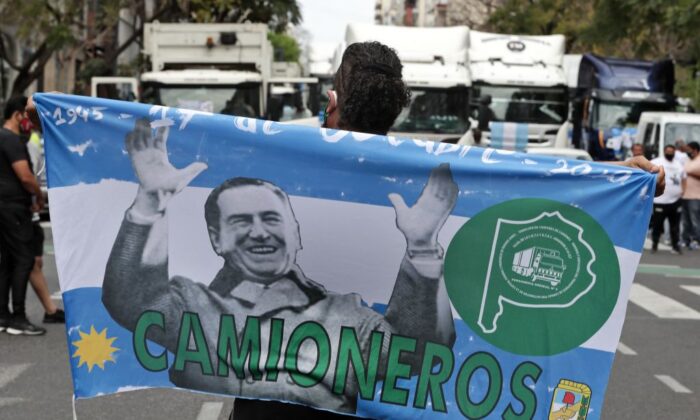 A demonstrator holds a flag depicting late Argentine president Juan Domingo Peron as he takes part in a march in support of the government on Loyalty Day, which this year commemorates the 75th anniversary of the birth of Peronism, in Buenos Aires, Argentina, on Oct. 17, 2020 (Alejandro Pagni/AFP via Getty Images)
Viewpoints

The Ghost of Peronism: Why Argentina Keeps Making the Same Mistakes Again and Again

Around a century ago, Argentina was one of the wealthiest countries in the world. Indeed, in the early 1900s, the country was ranked among the ten richest in the world, ahead of France and Germany. In 1914, more than half of Buenos Aires’s population was actually foreign-born. Argentina was a magnet for numerous European immigrants who flocked to find work and a better quality of life.

And then Peronism came along. The charismatic leader Juan Domingo Perón shunned the Argentine founding fathers who favoured economic liberalism and a free society.

The day after he passed away, on July 1, 1974, the New York Times wrote that in Perón’s prime, “he squandered his talents and his support—stoking class war, provoking mob violence, jailing and silencing opponents, and running a flourishing economy into the ground with extravagance and statism.”

A former army general, Perón rose to power initially through a military coup in 1943 and was later democratically voted president in 1946. He governed Argentina three times, elected twice from 1946 to 1955 when he was finally removed from power. But he eventually returned to government after more than 17 years in exile in Spain, from 1973 until his death in 1974.

Perón was a military attaché in Italy in the 1930s, where he was exposed to Benito Mussolini’s fascist ideology that would later strongly influence his presidencies. Perón viewed fascism as an efficient method of social control that would lead to wealth redistribution with economic interest being entirely subordinated to the interests of the state.

Another cornerstone of fascism incorporated by Peronism is the creation of state-owned industries, either by establishing new ones or nationalizing existing foreign companies.

It’s fair to say that Perón’s regime was directly inspired by National Socialism, better known as Nazism, according to the late Jacques Lambert, a French legal historian.

As a result, in no other Latin American country was, the domination of the masses by the dictator and his party more complete, and “the benefits dispensed more arbitrarily and with greater disregard for economic conditions.”

Peronism took (and retained) a brutal dictatorial character even after the defeat of National Socialism in World War II.

However, when the military basis of Perón’s authority was gone, he directed his appeal to the masses by using demagogic methods of unequalled cynicism, turning Peronism in an unmatched political force that has not lost its power even to this very day.

Perón was a master in demagogic exploitation of the popular faith in the all-powerful president. Although the Argentine people were quite educated in his time, his regime made skilful use of its faith in him.

His wife Evita Perón also filled the role of the people’s personal protector, becoming the subject of reverence and idolatry. It was her death in July 1952 that shook the regime and led to its demise. Her image can still be seen today adorning the side of the Labor Ministry’s building in downtown Buenos Aires.

How Perón Set Argentina Down a Path of Ruin

Perón’s national socialism encouraged him to establish state-owned enterprises, which have been one of the main sources of public sector deficits generated outside of the government’s budget.

His first presidency caused permanent changes in Argentine society that have been responsible for the entrenchment of inflation to this day.

Under Perón, state-run enterprises were overstaffed with political appointees who lacked the managerial skills and experience needed to make them profitable. Losses in state-owned enterprises coupled with huge government expenditures in public works and welfare programs gave rise to ever-growing government deficits that were funded by Argentina’s central bank through the printing of money.

According to Eduardo Singerman, a litigation director, “Perón institutionalized fraud in Argentina as his government used the central bank, an institution created by law, to expand money supply, generate inflation, and thereby steal resources from the private sector of the economy.”

Argentina’s gold reserves ranked the world’s sixth in 1930, but by December 1948, these reserves had already decreased from US$1 billion to US$258 million.

The 1949, Peronist reform of the Constitution assigned to the state direct control over foreign trade, ownership of all minerals and energy resources, and ownership of public service enterprises. Moreover, the Argentine state acquired foreign-owned utilities via purchase or outright expropriation.

Perón destroyed a great deal but did not rebuild anything. He managed to destroy one of the world’s most modern and prosperous economies.

Argentina’s economy has been so ruined by Peronism that the condition of the nation’s workers and middle classes, formerly by far the best in Latin America, is now one of the worst—four out of ten Argentines currently live below the poverty line.

Still, the Argentine governments that succeeded one another after 1955, including this present one, have been unable to break the habit of resorting to Peronist statism and demagoguery.