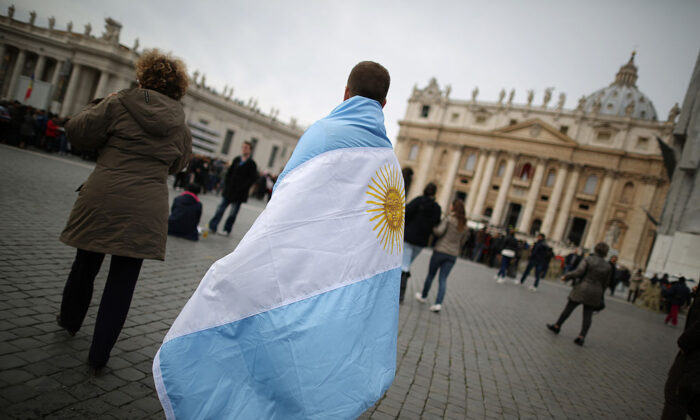 The Ghost of Peronism: Why Argentina Keeps Making the Same Mistakes Again and Again: Part 2

Ironically, Peronism continues to play an important role in the nation’s landscape—it is estimated that roughly 40 percent of the Argentine population feel they are Peronist.

“Peronism is part of the national DNA, it is part of Argentine identity. You cannot study Argentina without knowing that it’s a substantial part of our social, political, and economic life,” says Argentine journalist Rodolfo Muchela.

One of Perón’s lasting legacies in Argentina is the organisation of society into corporations with strong political power that only care about their own sectoral interest. Since Perón’s days, many of the nation’s corporations have been entirely dependent on the state and reject any curtailment in public outlays that may adversely affect them.

According to Eduardo Singerman,

“Economic nationalism, the organization of the Argentine society into corporations with strong political power that are economically dependent on the state’s expenditures and subsidies, and a lack of an independent central bank are Perón’s legacies, which have fundamentally contributed to the embedment of inflation in Argentina since his first presidency. It is no surprise then that these legacies have been present during the Peronist governments of Cristina Fernández de Kirchner … and her late husband Nestor Kirchner … and that at a certain point inflation would strike again.”

Alberto Fernández, the current president of Argentina, is an avowed Peronist. On March 22, 2021, he was elected by the national congress of the Peronist Party as the party’s new chairman. He has very strong Peronist credentials, playing an important role in the government of Nestor Kirchner, who led the nation from 2003 to 2007.

Kirchner was a far-left Peronist who worked closely with other far-left presidents in Latin America, especially Lula da Silva from Brazil, Fidel Castro from Cuba, and Evo Morales from Bolivia. He established a strong political alliance with Hugo Chávez’s Venezuela.

Fernández was appointed Chief of the Cabinet of Ministers by Kirchner upon taking office on May 25, 2003. He retained the same post under Kirshner’s wife and successor, Cristina Kirshner, upon her election in 2007.

She continued the lavish social spending and nationalization policies initiated by the first Kirchner government. As a result, by early 2008, the country was facing a US$23 billion public debt burden and inflation of around 25 percent that took a major toll on the poorer components of Argentine society.

Both Kirchner governments “spent like drunken sailors and made unsustainable commitments to the public sector. Such irresponsible fiscal policies fuelled rampant inflation, which Buenos Aires tried to camouflage by doctoring the official statistics,” wrote Jaim Daremblum, the director of Hudson’s Center for Latin American Studies (pdf).

In October 2019, Alberto Fernández won the presidential election with the Peronist Party, having Ms. Kirchner as his vice president.

Brazilian President Jair Bolsonaro refused to attend Fernández’s inauguration due to irreconcilable ideological differences. On June 9, 2021, Fernández was at a meeting with Spanish Prime Minister Pedro Sanchez in Buenos Aires when he said, “the Brazilians came from the jungle, but we Argentines came from the ships. And they were ships that came from Europe.”

Eduardo Bolsonaro, a congressman and the Brazilian president’s son, did not take this racist comment lightly and replied: “I say the ship that is sinking fast is that of Argentina,” reminding people on Twitter that Argentina’s troubled economy has been in recession since 2018.

The Peronism Behind Economic and Social Change

Peronism still connects and integrates with a variety of social movements and organisations—from labour unions, student associations, and now even active LGBTQI+ groups.

Argentina became the first country in Latin America to legalize same-sex marriage in 2010. It was the second country in the Americas to do so and the tenth in the world.

In Argentina, according to Culture Trip, “laws regarding the treatment of LGBTQ people have resulted in a culture of acceptance and celebration.”

Under the Fernández administration, Argentina became one of the first countries in the world to legally recognise non-binary gender on all official documentation. On Sept. 4, 2020, Fernández signed Decree No. 721/2020, establishing that at least one percent of all public sector workers in the national government must be transgender.

On July 20, 2021, he signed another decree mandating the National Registry of Persons (RENAPER) to allow a third gender option on all national identity cards and passports.

In both economic and humanitarian terms, the “progressive” presidency of Fernández can be fairly regarded as being a complete disaster.

The country’s annual inflation rate could hit 90 percent by the end of the year—the highest level in three decades.

During the COVID-19 pandemic, his government announced a country-wide lockdown, in effect from March 20 until March 31, later extended until April 12. This draconian lockdown was further renewed 10 times from April to September and included restrictive measures such as travel, transport and citizen movement restrictions, stay-at-home orders, store closures, and reduced operating hours.

These measures resulted in gross human rights violations, and now four in ten Argentines live below the poverty line, “a rate that has climbed during the coronavirus pandemic which exacerbated three years of economic recession in the country.”

It led to the collapse of every sector of the Argentine economy, with finance, commerce, manufacturing industry, and mining being the most seriously affected. Coupled with fiscally irresponsible policies, such lockdowns caused at least 40 percent of the population to drop below the poverty line.

Argentine People Call for More of the Same Policy

However, the Fernández government keeps spending far more than it takes in, and the government-controlled central bank contributes to an unstoppable fiscal deficit by printing more money, which makes inflation even worse.

According to Lucas Ribeiro, a Brazilian journalist, “such a demagogic attitude does nothing more than increase the debt, increase interest rates, raise inflation, reduce investments, and pay even more expensively and bitterly with the poverty of the people the price of fiscal irresponsibility.”

Curiously, most of these protesters were Peronists calling for more wage increases and social welfare funding to supposedly alleviate the economic crisis. Speaking to the crowd, Pablo Moyano, the head of the CGT workers’ union and himself a Peronist, demanded the Fernández government “take control of prices.”

Albert Einstein apparently said that the definition of insanity is to do the same thing over and over again and expect a different result.

“For those of us who have been around for longer, living in this country, everything has a sense of déjà vu,” says Carlos Gervasoni, an associate professor and chair of the political science department at Torcuato Di Tella University in Buenos Aires.

It wouldn’t be inappropriate to say that Argentina’s society suffers from a serious case of “collective madness.”

Be that as it may, the Argentine people should study their history better and make a conscious decision to rebuild a society based on the classical liberal values of their Founders.

As the Latin American authors of the insightful “Guide to the Perfect Latin American Idiot” comment: “If every Argentine has a Perón in the depths of his soul, it must be excised, with a benign cross if possible, and if not, then with a sharp scalpel.”

Indeed, Argentina will never be a rich and prosperous country again until the ghost of Peronism is finally exorcised.