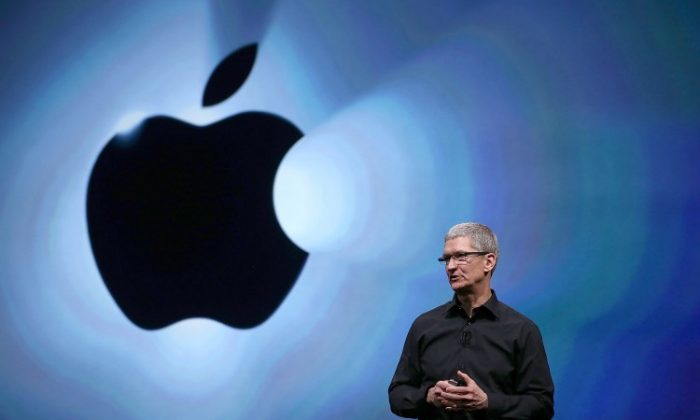 This file photo shows Apple CEO Tim Cook at an event in California. Cook testified before Congress May 21 on the topic of corporate tax avoidance. (Justin Sullivan/Getty Images)
Business & Economy

Loopholes: Governments create them, companies exploit them
By Frank Yu

Apple has a lot of cash. What people don’t know is that most of it is stashed overseas, not taxed by the U.S. government. This is why CEO Tim Cook appeared in front of Congress this week to testify on corporate strategies to avoid U.S. taxes. Apple, however, is not alone.

While such strategies are legal, the government is concerned that Apple and other multinational corporations have exploited U.S. and foreign tax regulations to avoid taxes in the United States. In the case of one subsidiary in Ireland, Apple did not pay any tax at all.

The reasons why those metrics have shifted since 1952 are easy to identify. And the U.S. government could find part of the answer by examining its own history of how tax laws have evolved.

Corporate tax avoidance is not confined to Apple. It spans across all major industries. By now it is a lucrative industry made up of corporations, banks, and professional services firms such as law and accountancy firms.

Companies, by their nature, seek to maximize profits for shareholders. The most frequently used indicator of profitability is net income after tax. While there are certainly more accurate and useful ways to measure a company’s financial performance, such as free cash flows, EBITDA (earnings before interest, taxes, depreciation, and amortization), gross margins, and so on, investors and analysts continue to view net income as the paramount metric of financial performance.

This premise creates the desire for corporations to pay less tax. There are numerous ways to achieve this. The most popular methods involve transferring revenues to entities registered in lower tax jurisdictions, which Apple has done.

Many of Apple’s entities generating the bulk of its international revenue are registered in Ireland, a country with a very low corporate tax rate of 12.5 percent. Added to this, many companies registering in Ireland will create multiple entities in a legal structure, which mostly pay a much lower effective tax due to offsetting expenses, tax-credits, and other offsets.

The U.S. government claims that Apple and Ireland had negotiated a 2 percent tax rate on taxable income, while both Ireland and Apple denied setting up such an agreement. Without knowing the details of Apple’s tax structure, we can only make certain broad estimates.

Apple likely employs a type of IP (intellectual property) holdings structure in its tax-planning strategy. In this structure, the company will sell its patents and other IP to a foreign subsidiary located in a low tax jurisdiction. The company’s other affiliates located in higher tax jurisdictions will make payments to the foreign subsidiary as compensation for using the IP. This method is called transfer pricing. The resulting cash flows are all internal, so the effect on profit before tax is zero. However, from a tax perspective the picture is completely different.

The company deducts royalty payments in one jurisdiction and pays tax on royalty income in another. In the above example, the expenses are deducted at a higher rate, while income is taxed at a lower rate—a double benefit.

This is common practice in the IP-heavy technology and pharmaceutical sectors, where transfers of so-called intangible assets are easy.

Many factors have contributed to the recent surge in corporate tax structuring, the most influential being the international tax laws that global government creates.

Tax avoidance is a type of arbitrage, similar to classic economic arbitrage, which seeks to take advantage of pricing differences of the same item or service in different locations. The person engaging in arbitrage seeks to purchase items in low priced markets and sell them in high priced markets, enjoying a risk free profit. He only has to pay transaction costs, which are higher for physical goods and much lower for intangible assets, such as intellectual property.

Applied to taxes, a company will seek to earn revenues in low-tax locations, and pay expenses in high-tax locations. In this case, even if revenues and expenses are the same before tax, the company will still enjoy a profit due to a difference in tax rates. Generally, the bigger the difference in tax rates between nations, the bigger the opportunities for tax arbitrage.

Taken together, this highly complex global environment invites tax arbitrage by presenting a wealth of opportunities to profit from. And this is the ultimate motivation and reason for corporate tax avoidance.

The history of taxation is fraught with such examples. The biggest one was the IRS’s “check-the-box” rule on corporate taxation, implemented in 1996. The law was created to reduce paperwork and red tape for companies managing multiple domestic and foreign entities, by granting companies a choice to select an entity as a “pass through” for tax purposes.

The entity would be treated as a partnership located in the United States or Europe for example, while the gains and losses could be captured by the parent, possibly located in a tax haven. Schemes involving disregarded entities are central to any tax arbitrage structure.

There are ways to deter companies from engaging in these tax strategies. Conceptually, a simple taxation law will have the fewest loopholes to exploit.

Unfortunately, today the U.S. tax code has expanded over the years to become an incomprehensible behemoth that only well-trained tax lawyers and accountants can navigate. Such a system is costly for the government as well as companies. Apple also “welcomes an objective examination of the U.S. corporate tax system, which has not kept pace with the advent of the digital age and the rapidly changing global economy,” Cook stated in his prepared remarks for the testimony.

Another solution is to streamline global tax rates, making them somewhat uniform. Eliminating or reducing differences in global tax rates is the best way to curb tax arbitrage. It would simply get rid of the ability to profit, eliminating a company’s incentive to engage in these strategies.

Politically, it is also a tough battle. Republicans have argued for taxing only U.S. revenues. Democrats say that such a measure would hurt American jobs as companies will seek to move investments and operations abroad to lower tax environments. Closing certain tax breaks and loopholes has gained traction, but politicians on both sides of the aisle have been slow to act.

The best idea is probably a combination of harmonizing tax rates and simplifying tax laws. Due to the localized nature of tax collection and the corresponding vested interests, the question remains: Who will make the first move?