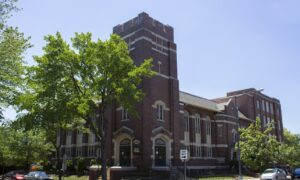 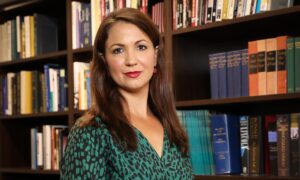 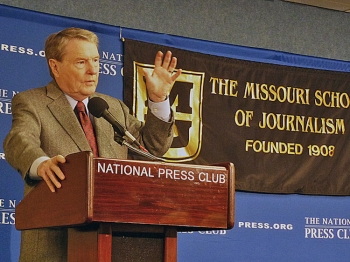 The Future of Public Media

WASHINGTON—After barely escaping the final 2011 budget compromise with their federal funding intact, over 20 public media executives, journalists, and researchers this week discussed what the future may hold for them.

“I believe that there is a major role for public media to play in making sure that serious journalism performs its responsibilities, its duties in the serious journalism area,” said Jim Lehrer, the face and executive editor of “PBS NewsHour.” Lehrer, who is also the author of 20 books, has been with the program since 1983.

“Collaboration, partnerships, innovation, and digital media dominated discussions of the way forward for such venerable institutions as National Public Radio (NPR), and PBS. Affiliate stations and partners working on exciting new media projects also joined in the panels, part of the 2011 Curtis B. Hurley Symposium, held at the National Press Club and aired on C-Span.

Those who work in public media believe passionately in the value of what they do. They also know, from 44 years of experience in the United States that they will have to continually justify to Congress why the government should support them—especially this year.

The appropriation given to the Corporation for Public Broadcasting (CPB), and then distributed to users mainly through grants, has been $450 million for the last eight years.

“The critique of public media is not new. It has occurred every decade since—there have been attempts to defund it,” said Tom Glaisyer, Knight Media policy fellow with the New America Foundation over the telephone.

This year, public broadcasting finds itself on the defensive. In March, the House passed a bill forbidding any federal funding from going to NPR. All but seven Republicans voted in favor of the measure, and all Democrats voted against it. It went nowhere in the Senate, but the funding was left on the chopping block during the difficult 2011 budget negotiations.

Ultimately, a grass-roots campaign launched by the media outlets and led by 170 million Americans for Public Broadcasting, was successful. Half a million e-mails, and thousands of telephone calls went to members of Congress.

“There were a lot of people around the country that reached out to their members to say that this is something, this is a service—public television, public radio—that is really valued,” said Paula Kerger, president and CEO of PBS.

Congress finally approved the request, but the battle will continue as the 2012 budget is debated.

“It is not over. There are a good number of people in Congress, in both the House and the Senate, who are quite committed to defunding public broadcasting,” said Patrick Butler, president of the Association of Public Television Stations, public broadcasting’s chief lobbyist.

The amount that PBS and NPR actually get is small, but significant, say public media managers. The money is highly leveraged. It is used in part to secure the bulk of their funding from listeners and viewers via fundraising efforts.

Stations in communities that tend to be under served anyway, and have less ability to raise money, rely on it most. As much as 50 percent of their budgets might come from taxpayer dollars.

Just 10 percent of NPR’s budget comes from the federal government, and most of that comes by way of grants, said Interim President and CEO of NPR Joyce Slocum.

“Fifteen percent of television funding comes from the federal government. The rest of it comes community by community,” said Kerger.

Read More…Public Media for the Public