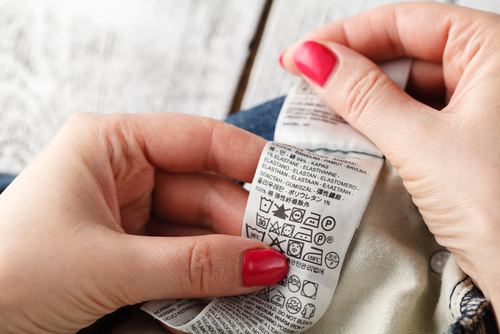 The Full Disclosure in Underwear Act

My wife’s eyesight is much worse than mine, which explains the reaction we often get walking down the street together. “What can she possibly see in him?” is the underlying mental reaction that causes the surprised expression we see on the faces of passersby, especially the men.

So, I am often called upon to read fine print for her, and not just for content, but I was caught off guard by her most recent call for me to act as human magnifying glass.

“Has there been some kind of product recall for underpants?” she asked.

“Because it looks like the instructions on my new pairs have gotten a lot longer than they used to be.”

Back in the good old days, before ambulance-chasing lawyers ginned up class actions over lip-synching pop music, a terse, succinct “Made in Sri Lanka, 82% nylon, 18% elastic, wash darks separately” was all that was needed to insulate an underwear sweatshop from liability. But she was right; the disclaimer droned on and on for a total of 22 legalistic lines. There had apparently been an upheaval in the law of underpants, comparable to the Magna Carta or maybe Hammurabi’s Code, and underwear wearers had been put on notice by a warning so long that the type looked like something you’d reach for a microscope to read.

“You’re right,” I said. “Somebody must have won a multimillion-dollar lawsuit again the underwear-industrial complex.”

“But who needs instructions to put on underpants?” she asked, incredulous. “Other than ‘Insert legs in holes, pull up over …”

“Please,” I said, stopping her before she revealed something I’d have to disclose to my confessor. “Let me take a closer look.”

For starters, the new world order of underpants is longer because it’s tri-lingual. This is the bitter crop we reap when we insist on teaching kids foreign languages in grade school—everybody wants to show off how worldly they are. “You can skip two out of every three lines,” I said, “unless you want to read about underpants in a Romance language.”

“Let’s see—they’ve gone to a more complete disclosure of the fabrics.”

“I’d better hear that, in case I’m allergic to something.”

“Okay. In addition to polyester and elastic, certain parts have nylon, others have cotton, and apparently they’ve added some flax.”

“That can’t be right—I put that on my cereal in the morning.”

I looked closer. “It’s used to make bed sheets too, but you may be right. It looks like it’s a French phrase that means ‘My parrot admires your fedora.’”

“Your high school French didn’t help us much when we went to France,” she reminded me with a trace of bitterness. “Keep going.”

“Okay, next is”—I squinted to see—“No checks accepted. Hold handrail. You must be this tall to ride this ride.”

“Maybe, but my eyes are getting worse as I get older. You won’t be able to depend on me forever.”

“Forever ran out a long time ago with you,” she said with disgust. “Let me get a real magnifying glass.”

She returned with a family heirloom, an antique that my dad used to read the newspaper when his sight began to fail him.

“Much better,” I said, as I scanned the tiny text. “Hmm … I think I found the problem.”

“What kind of idiot puts on wet underpants?”

“That kind that needs a warning label in his boxer shorts, I guess.”

“There’s something in what looks like Esperanto,” I said, referring to the goulash of an international language that for some reason failed to produce world peace, the modest mission its adherents held for it.

“You took Spanish in high school—what does it mean?”

She racked her brain, but gave up fairly quickly. “I’ll have to look it up,” she said, and then went to that universal answer machine, the World Wide Web.

“Is that a problem with women’s underpants?” I asked.

“It is,” she said. “But that warning should go on the outside.”