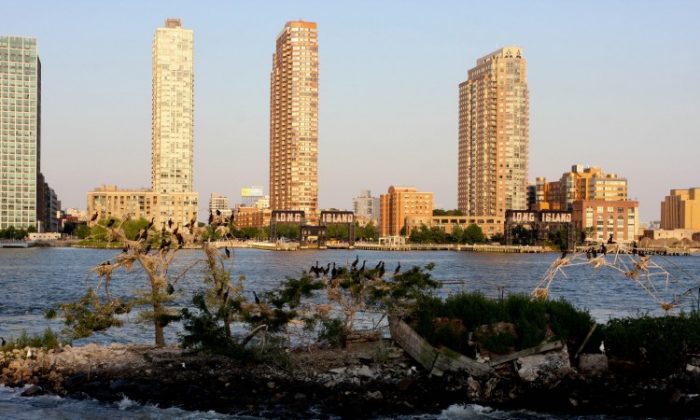 The Flow of Time on the East River

NEW YORK—The shores and islands of the East River have been home to a motley assortment of humans and wildlife over the years.

The city once relegated its outcasts to the islands. Roosevelt Island and North Brother Island near LaGuardia Airport were once the domain of quarantine hospitals, treatment centers for drug addicts, a reformatory for delinquent youth, and other such undesirables.

These institutions have long been abandoned, but the city maintains the tradition by keeping prisoners on Riker’s Island.

Now vines encompass the old, deserted structures on North Brother Island and the original avian inhabitants have reclaimed the land. Perhaps if the birds were interested in trendy neighborhoods they might call it NoBro. The time-weathered smallpox quarantine hospital on Roosevelt Island is starkly juxtaposed against high-rise buildings and the construction cranes that help build them.

The weekly Sunday night Sunset Eco-Cruise hosted by the New York City Audubon Society and the New York City Water Taxi carries passengers up the East River from South Street Seaport to the Brother Islands off Hunts Point in the Bronx. It is a trip through a world both natural and man-made, along a shore dotted by signs of the historic, the anachronistic, and the modern.

As the catamaran glided under the Williamsburg Bridge, Audubon guide Gabriel Willow began his narrative.

The East River estuary drew wildlife and early settlers alike. Estuaries, where salt and fresh water meet, come second only to rainforests as the most diverse and rich ecosystems, explained Willow.

Many of the birds left the area or were shot in the name of fashion as the settlers changed the rich natural habitat into a hostile, polluted wasteland. In the 1890s, 1 in 100 Americans worked in the feather industry, said Willow.

Ladies walked New York’s fashionable streets wearing hats stuffed with as many feathers and flowers as possible. Willow colorfully described it as “a grisly museum of natural history diorama on your head.”

Dozens of double-crested cormorants and a variety of species of gulls circled above the boat and perched on both trees and a collapsed sculpture to honor U Thant, former secretary-general of the United Nations, as the boat pulled past a tiny patch of land called U Thant Island.

Many birds returned to the East River in the 1970s. No one is really sure why, explained Willow, but it could be due in part to the passage of the Clean Water Act and other environmental measures enacted in 1972.

Newtown Creek divides Queens and Brooklyn and flows into the East River not far from U Thant Island. It is one of the most polluted waterways in the nation. Centuries of industrial activity along its shores have earned the creek its designation as an Environmental Protection Agency Superfund site.

“So, luckily it’s going to get cleaned up. Although there isn’t such a super fund for the Superfund,” quipped Willow casting some doubt on the EPA’s ability to pay for its good intentions.

The creek runs along the southern border of Long Island City, Queens. Behind the perched flocks of birds tower more recent developments: three high-rise buildings above two signs reading “Long Island.” A little ways up the river, a similar Pepsi-Cola sign stands as a vestige of the previous era of economic development. The sign remains out of nostalgia, the warehouse it once sat atop now long gone.

The catamaran continued on, skimming the water with its eco-friendly engineering that treads lightly over the marine habitat.

We passed the ConEdison power plant known colloquially as Big Alice, a sewage treatment facility, and two barges off of Hunts Point: one is a floating pool barge and the other is used to hold prison inmate overflow from Rikers Island.

“Everything else terrible in the city that nobody wants to put in their backyard gets put in Hunts Point,” commented Willow, noting that the pool for kids is the one thing the neighborhood has going for it. Hunts Point is home to three sewage treatment plants, an oil refinery, and MTA bus parking, which creates exhaust in an area with skyrocketing child asthma rates.

Nearby North Brother Island was once a place of exile, a spot for people rather than things unwanted by the rest of the city.

A notable example is a lady named Mary; the city put there in the late 19th century. She lived 30 years in quarantine. An Irish immigrant, Mary was a carrier of typhoid, though she did not exhibit symptoms herself.

Mary cooked for several families, all of whom became infected. The public had sympathy for her at first and pressured the city to release the woman from her stone chamber on the island. City officials did so on condition that she cease her work as a cook. When authorities discovered her cooking for a maternity ward in a New York hospital they shipped her back to the island for good.

She did not go without a fight; the colorful character that would go down in history as Typhoid Mary “disagreed with a carving knife” when authorities came to collect her, recounted Willow.

The hospital shared the island with a power plant until the island was abandoned in the 1960s. Willow went there to study the birds several years ago. He described fire hydrants engulfed by bushes and lampposts strung with vines.

An avid environmentalist, Willow takes comfort in seeing the ecosystem recover so well.

“So, if for some reason New York City is ever abandoned or there’s an apocalypse of any kind, it’ll look like that in about 50 years. That’s kind of cool,” said Willow.