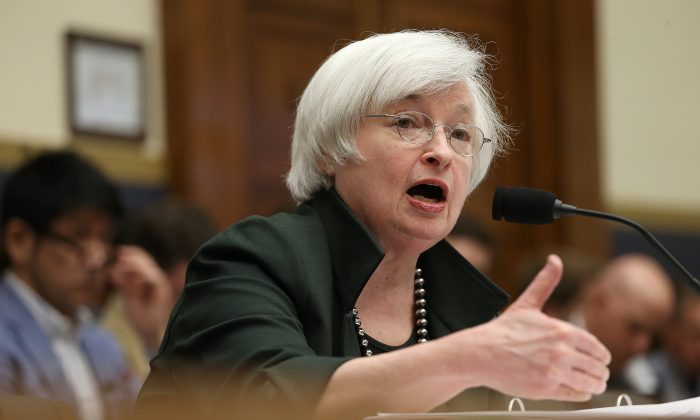 The Federal Reserve Is Losing Credibility by Not Raising Rates Now

So the results are in: the Federal Reserve decided to keep interest rates at around zero, delaying any increase in its target for at least six more weeks.

The move did not come as a surprise to Wall Street—which was betting 3-to-1 against the hike. But that’s not because investors didn’t think the U.S. economy was ready for a rate “liftoff.” Rather, it shows that markets did not believe the Fed has the will and power to raise rates for the first time since June 2006.

The economy is ready if not eager for a liftoff and a return to a normal rate environment. Investors and businesses know this. It’s time the Fed recognized this too.

The economy is ready if not eager for a liftoff and a return to a normal rate environment. Investors and businesses know this. It’s time the Fed recognized this too.

The data clearly show that the U.S. economy hasn’t looked stronger in a very long time—a sharp improvement from earlier this year when I wrote that it wasn’t ready for an increase in interest rates.

While the labor market may not have experienced strong growth in wages yet, joblessness has plunged to 5.1 percent, reaching what is known as the “natural rate” of unemployment (also called “full employment”). That’s significant because achieving maximum employment is one of the Fed’s two primary mandates, and anything below the natural rate risks fueling inflation.

And inflation, its other main policy goal, is also in range of its target of 2 percent. Indexes of consumer prices, both including and excluding volatile energy prices, and personal spending are forecast to be right in that sweet spot of 1.5 percent to 2 percent next quarter.

Why the Fed Is No Longer Center of the Financial Universe

Furthermore, the U.S. economy grew a stronger-than-forecast 3.7 percent in the second quarter, much better than the previous three-month period and signaling the recovery is on a pretty sound footing.

The output gap—or difference between what an economy is producing and what it is capable of—remains negative at about 3 percent, and deflation is still a threat.

But regardless of what the Fed does now and in coming months, its target short-term rate will remain well below the long-term “normal” level of about 4 percent for years to come, so there is little risk a small increase will drag down growth.

The main factors that persuaded the Fed to delay liftoff are the weakening global economy, “soft” net exports, and subdued inflation.

Why the Fed Didn’t Act

According to the Federal Open Market Committee statement, the main factors that persuaded the Fed to delay liftoff are the weakening global economy, “soft” net exports, and subdued inflation.

Granted, developing economies, especially China and Russia, are indeed weak as are global financial markets and that could spill over into the United States. And the devaluation of the yuan in China and the recession in Canada (the U.S.’s two largest individual trading partners)—coupled with loose monetary policy in Europe—are causing the dollar to appreciate, making U.S. exports decline and imports rise.

It is important to understand that all of these factors except inflation are outside the Fed’s jurisdiction and its dual mandate of maintaining full employment and stable prices. If these factors matter at all to U.S. monetary policymakers, it should only be through their effects on the U.S. economy, in terms of inflation, labor markets, and GDP.

And while an appreciating dollar and low oil prices can indeed create deflationary pressures (and reduce U.S. GDP), the data indicates that U.S. prices nevertheless continue to rise, if slowly.

What’s more important is that the impact of a small rate hike has been with us for some time. Capital is already fleeing developing economies, and the dollar has been strong for a while. Hence, the direct marginal economic effects of a 0.25 percentage point increase in the target rate on the U.S. economy would be negligible at best.

What was really at stake was repairing the Fed’s credibility in terms of successfully shaping U.S. monetary policy and sending a powerful signal that the U.S. economy is in strong shape.

What was really at stake was repairing the Fed’s credibility in terms of successfully shaping U.S. monetary policy and sending a powerful signal that the U.S. economy is in strong shape.

Hoping to avoid previous bungled attempts to adjust monetary policy in recent years that led to significant market volatility, this time the Fed spent at least half of the year updating the language in its statements and gradually preparing the world for a hike. And since it did not deliver, this tells the world that the Fed is unable or unwilling to go against market expectations.

As a result, the central bank will have to either delay the liftoff until the next meeting, slowly reshaping market expectations to be consistent with a hike at that point, or risk a financial panic if it decides on an unexpected policy shift sooner. Delaying the timing further would mean losing precious time in normalizing monetary policy, necessary so that the Fed again has the tools it needs to fight future economic downturns. There’s also the increased risk that the economy will overheat and cause inflation to spiral out of control.

Auditing the Federal Reserve Is a Frightening Idea. Here’s Why

There is never a perfect time to start down this path; it is always possible to find reasons to delay. But each postponement requires even stronger data to justify an eventual liftoff the next time. The problem is that with the hesitant Fed sending mixed signals to the economy, that imaginary perfect day might not ever come.

Alex Nikolsko-Rzhevskyy is an associate professor of economics at the Lehigh University. This article was previously published on TheConversation.com