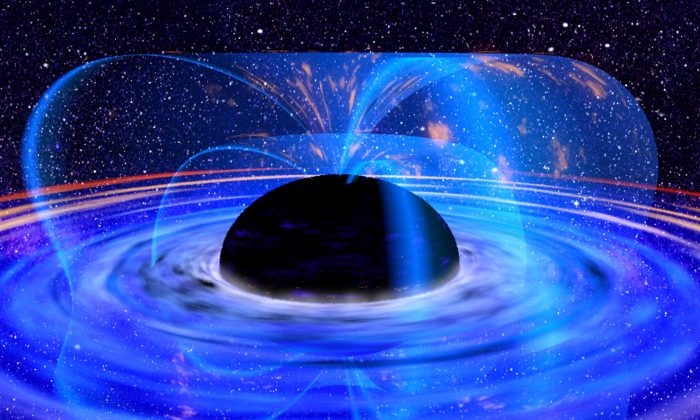 Black holes will be all that remains before the universe enters heath death. But the story doesn’t end there… (XMM-Newton, ESA, NASA)
Science

By piecing together an increasing number of clues, cosmologists are getting closer to understanding what the future and ultimate fate of the universe will be. And I’m afraid the news is not good. Star formation will cease and black holes will take over until they eventually evaporate into nothingness. There could even be a “Big Rip” on the horizon. But for those who don’t mind waiting another 101050 years or so, things may start to look up as a number of bizarre events could take place.

But before we consider random events in the very far future, let’s start with what we know about the past and the present.

The reason we can investigate the past evolution of the universe is that, in some regards, astronomy is analogous to archaeology. Explicitly: the further we peer away from our home planet, the further back in time we see in to the universe. And when we look far back in time, we observe that galaxies are closer together than they are at present. Although only one strand of evidence among many, this observation – coupled with Einstein’s theory of general relativity – means that the universe started with a Big Bang and has been expanding ever since.

Late last century, one of the most pressing issues in modern cosmology was to measure the deceleration rate of the universe. Given the amount of mass observed in the cosmos it was thought that it might be enough to cause an eventual contraction of the expansion.

Remarkably, two independent teams of scientists found the exact opposite. The universe was not slowing down in its expansion, it was accelerating. This profound discovery lead to the Nobel prize in physics in 2011. However, understanding the implications of it remains challenging.

One way to think about the accelerating universe is that there must be some kind of material (or field) that permeates the universe that exerts a negative pressure (or a repulsive gravity). We call this dark energy.

We therefore suggested that dark energy is real. If the concept of dark energy and its repulsive gravitation force is too weird, then an alternative to consider is that perhaps our theory of gravitation needs to be modified. This might be achieved in in a similar way that relativity advanced Newtonian gravitation. Either way, we need new physics to explain it.

Before turning to the very distant future, I will mention another relevant survey: GAMA. Using that survey, we found that the universe is slowing “dying”. Put another way: the peak era of star formation is well behind us, and the universe is already fading.

The more “immediate” future can be predicted with some certainty. Five billion years from now, the sun will enter its red giant phase. Depressingly, no more than two more billion years after that, it will consume Earth.

After that, the relative strength of dark energy and how it might vary over time becomes important. The stronger and faster the repulsive force of dark energy is, the more likely it is that the universe will experience a Big Rip. Put bluntly: the Big Rip is what happens when the repulsive force of dark energy is able to overcome gravitation (and everything else). Bodies that are gravitationally bound (such as our local supercluster, our own Milky Way galaxy, our solar system, and eventually ourselves) become ripped apart and all that is left is (probably) lonesome patches of vacuum.

The data from the WiggleZ survey and other experiments do not rule out the Big Rip, but push it in to the exceptionally far future (if at all).

Somewhat more pressing is the heat death of the universe. As the universe carries on expanding, we will no longer be able to observe galaxies outside our local group (100 million years from now). Star formation will then cease in about 1-100 trillion years as the supply of gas needed will be exhausted. While there will be some stars around, these will run out of fuel in some 120 trillion years. All that is left at that point is stellar remnants: black holes, neutron stars, & white dwarfs being the prime examples. One hundred quintillion (1020) years from now, most of these objects will be swallowed up by the supermassive black holes at the heart of galaxies.

In this way, the universe will get darker and quieter until there’s not much going on. What happens next will depend on how fast the matter in the universe decays. It is thought that protons, which make up atoms along with neutrons and electrons, spontaneously decay into subatomic particles if you just wait long enough. The time for all ordinary matter to disappear has been calculated to be 1040 years from now. Beyond this, only black holes will remain. And even they will evaporate away after some 10100 years.

At this point, the universe will be nearly a vacuum. Particles that remain, like electrons and light particles (photons), are then very far apart due to the universe’s expansion and rarely – if at all – interact. This is the true death of the universe, dubbed the “heat death”.

The idea comes from the second law of thermodynamics, which states that entropy – a measure of “disorder” or the number of ways a system can be arranged – always increases. Any system, including the universe, will eventually evolve into a state of maximum disorder – just like a sugar cube will always dissolve in a cup of tea but would take an insanely long time to randomly go back to an orderly cube structure. When all the energy the in the cosmos is uniformly spread out, there is no more heat or free energy to fuel processes that consume energy, such as life.

All of the above seem very bleak to say the least. So I will end this article on a highly speculative, probably wrong, completely untestable, but more positive, note.

According to the strange rules of quantum mechanics, random things can pop up from a vacuum. And it is not just a mathematical quirk: the existence of particles suddenly coming into existence and then disappearing again is seen constantly in particle physics experiments. However, there is no reason why so-called “quantum fluctuations” could not give rise to an entire atom.

There has even been speculation that a “brain”, dubbed a Boltzmann brain, could be created in this context. The timescale for such a thing to appear? Well, that has been computed at 101050 years.

Kevin Pimbblet is Senior Lecturer in Physics at University of Hull