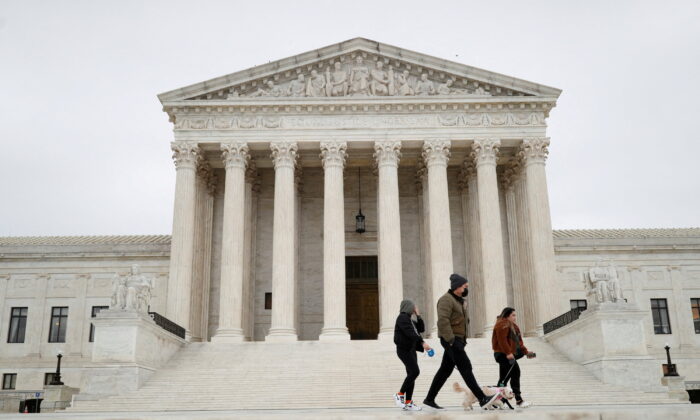 Visitors walking their dogs across the U.S. Supreme Court Plaza on Capitol Hill in Washingotn on Feb. 22, 2022. (Tom Brenner/Reuters)
Viewpoints

The Fascinating Supreme Court Opinions in the Vaello Madero Case

There hasn’t been much public attention bestowed on the Supreme Court’s opinions in United States v. Vaello Madero (pdf). But there should be.

Kavanaugh’s opinion is important, but the concurring opinions of Thomas and Gorsuch are extraordinary. (Disclosure: Thomas’s opinion cited one of my own scholarly works.) After explaining the constitutional law background, I’ll unpack each opinion.

The 14th Amendment was ratified in 1868 in the wake of the Civil War. Its equal protection clause reads, “nor shall any State … deny to any person within its jurisdiction equal protection of the laws.” Notice that this wording applies only to state governments, not to the federal government. It doesn’t limit how Congress governs federal territories or the District of Columbia.

The court based the latter decision on the Fifth Amendment’s due process clause, which does apply to the federal government (“nor shall any person … be deprived of life, liberty, or property, without due process of law”). The justices claimed that this language contains an “equal protection component,” which D.C. segregation violated. In other words, they ruled that in these circumstances, denial of equal protection was a denial of due process.

As we shall see, the claim of an “equal protection component in the due process clause” is mostly nonsense. It was the product of judicial lawmaking common among 20th-century activist justices. As I noted in an earlier essay, however, the present court generally adheres to 20th-century liberal precedents.

It’s one reason why the common assertion that we have a “conservative Supreme Court” is untrue.

Justice Kavanaugh’s Opinion for the Court

Jose Luis Vaello Madero was a resident of Puerto Rico who received SSI payments in violation of federal law. When the feds sued him for restitution, he argued that denying SSI to residents of Puerto Rico violated the “equal protection component of the Fifth Amendment Due Process Clause.” In keeping with the court’s deference to most liberal precedent, Kavanaugh’s opinion didn’t question the assumption that the Fifth Amendment due process clause has an “equal protection component.”

Nevertheless, all nine justices agreed that Congress still has discretion in making such decisions. They applied a test whereby a law discriminating among people is constitutional if the discrimination has a “rational basis.” Kavanaugh said Congress did, indeed, have a rational basis for denying SSI benefits to Puerto Ricans. He pointed out, for example, that Puerto Ricans are exempt from many federal taxes.

In dissent, Sotomayor argued that there was no rational basis. She noted that people on SSI are so poor they generally don’t pay federal taxes, whether they live in Puerto Rico or anywhere else in the United States.

The main “takeaway” from Kavanaugh’s majority opinion is that Congress has great leeway in treating people differently based on financial considerations. This result is in keeping with the court’s 20th-century liberal precedents.

Thomas is an originalist. That means he interprets the Constitution as the Founders intended it to be interpreted, and as judges and lawyers have construed most legal documents for centuries. He has never reconciled himself to the usurpations of 20th-century judicial activists.

Thomas agreed with Kavanaugh that denying SSI benefits to Vaello Madero didn’t violate equal protection. Yet, as Thomas often does, he decided to puncture a judicial balloon. He wrote separately to debunk the claim that Fifth Amendment due process somehow includes 14th Amendment equal protection.

Thomas pointed out that “process” means procedure. The due process clause (and this is my formulation) was designed to protect people from unfair procedures—specifically, from efforts by government to attack citizens with newly made-up rules that government applies retroactively.

The 14th Amendment equal protection clause, by contrast, is designed to prevent a state from passing laws that irrationally discriminate among classes of people.

Thomas then considered whether some other parts of the Constitution impose “equal protection” limits on the federal government. (Other scholars and I have concluded that the answer is “yes.” (pdf))

Thomas focused on the citizenship clause of the 14th Amendment. It grants citizenship to all “persons born or naturalized in the United States and subject to the jurisdiction thereof.” Thomas speculated (he admitted he hasn’t entirely made up his mind) that citizens inherently enjoy equal civil rights. There is some linguistic sense behind Thomas’s suggestion: “Civil” derives ultimately from the Latin word cives, which means “citizen.” And when the 14th Amendment was ratified, that Latin derivation would have been common knowledge among educated Americans.

One caution, though: When the 14th Amendment was ratified, people used the phrase “civil rights” in a narrower way than we use it today.  Civil rights were limited to protection against how the government treated you. They encompassed, for example, the right to trial by jury and free speech. They didn’t include what were called “political rights” (influencing government, as by voting or holding political office) or “social rights” (equal treatment by private parties). Government protection for political and social rights came later.

Based on his opinion, Justice Thomas seems to understand this.

Thomas often writes for the future. His opinion may herald the day when the court cashiers the fictional “due process contains equal protection” idea and moves toward a sounder constitutional interpretation.

The Constitution is absolutely clear that (1) it derives all its force from the people and (2) the federal government and its officials have only those powers the Constitution gives them—no more.

Still, some justices, officials, and academics maintain that federal functionaries have powers the Constitution doesn’t give them. For example:

The court might have addressed the Insular Cases in Vaello Madero, since the matter at hand involved Congress’s authority over Puerto Rico. But the court didn’t.

So Gorsuch issued his own sizzling opinion. He pointed out that the “Insular” decisions have no basis in the Constitution: The notion of unlimited power over territories directly contradicts the principles embodied in that document. He added that the judiciary has no business deciding whether a territory is “incorporated,” since that phrase also is foreign to the Constitution.

He further observed that the Insular Cases were based on the assumption that people in some American territories, such as Puerto Rico and the Philippines, were racially and culturally inferior. He identifies Harvard professors as responsible for promulgating that idea (as they have promulgated so many other bad ideas). In other words, the good justice didn’t spare his own alma mater.

Gorsuch is now the court’s best writer. In this case, as often, his prose is worth quoting at length:

“The flaws in the Insular Cases are as fundamental as they are shameful. Nothing in the Constitution speaks of ‘incorporated’ and ‘unincorporated’ Territories. Nothing in it extends to the latter only certain supposedly ‘fundamental’ constitutional guarantees. Nothing in it authorizes judges to engage in the sordid business of segregating Territories and the people who live in them on the basis of race, ethnicity, or religion.

“The Insular Cases can claim support in academic work of the period, ugly racial stereotypes, and the theories of social Darwinists. But they have no home in our Constitution or its original understanding. In this country, the federal government ‘deriv[es] its powers directly’ from the sovereign people … and is empowered to act only in accord with the terms of the written Constitution the people have approved. … ‘Monarchical and despotic governments’ may possess the power to act ‘unrestrained by written constitutions.’ … But our Nation’s government ‘has no existence except by virtue of the Constitution,’ and it may not ignore that charter in the Territories any more than it may in the States.”

Later this year, the court will hear consolidated cases addressing Congress’s pretensions to unlimited power over Indian affairs. Perhaps the court will apply Gorsuch’s reasoning there.

Robert G. Natelson, a former constitutional law professor who is senior fellow in constitutional jurisprudence at the Independence Institute in Denver, authored “The Original Constitution: What It Actually Said and Meant” (3rd ed., 2015). Since 2013, Supreme Court justices have cited his constitutional research articles 21 times in eight cases.