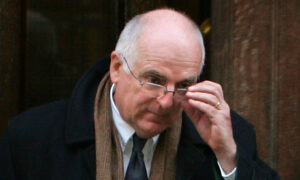 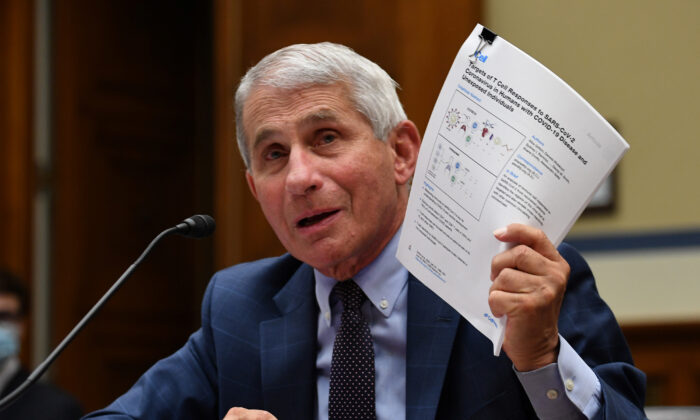 Dr. Anthony Fauci, director of the National Institute for Allergy and Infectious Diseases, testifies during the House Select Subcommittee on the Coronavirus Crisis hearing in Washington, D.C., on July 31, 2020. (Kevin Dietsch/Pool via Reuters)
Viewpoints

In a recent dump of Dr. Anthony Fauci’s emails, Peter Daszak thanks Fauci for “publicly standing up and stating that the scientific evidence supports a natural origin for COVID-19 from a bat-to-human spillover, not a lab release from the Wuhan Institute of Virology.” In reality, evidence has been mounting that the Wuhan Institute of Virology (WIV) was responsible for the lab release.

Daszak’s EcoHealth Alliance received $3.7 million in grants from the U.S. National Institutes of Health (NIH) to study bat coronaviruses at the WIV, which also received shipments of deadly pathogens transferred from a lab in Canada. The WIV conducted dangerous gain-of-function research, which makes viruses more lethal and transmissible.

Money is fungible, and the WIV, controlled by a communist dictatorship, is not accountable to American taxpayers. As Sharyl Attkisson documents, U.S. taxpayer money did indeed fund gain-of-function research in China. In addition to the grants channeled through Peter Daszak’s EcoHealth Alliance, the WIV received direct financial support from the United States.

Daszak, a zoologist, branded as a “conspiracy theory” any possibility that the virus that causes COVID-19 was the result of gain-of-function research or had escaped from a lab. He was a signatory to a letter to The Lancet intended to smear those who suspected a WIV or lab-leak origin. For Daszak, who had funded the WIV, it was a conflict of interest, and he should have played no role in any investigation. Before these revelations, a campaign against coronavirus dissidents was ramping up in force.

Former Centers for Disease Control and Prevention (CDC) director Dr. Robert Redfield is a veteran of the U.S. Army Medical Corps and co-founder of the University of Maryland’s Institute of Human Virology. In March, Redfield told reporters: “I’m of the point of view that I still think the most likely etiology of this pathology in Wuhan was from a laboratory. You know, escaped. Other people don’t believe that. That’s fine. Science will eventually figure it out.”

“I was threatened and ostracized because I proposed another hypothesis,” Redfield said. “I expected it from politicians. I didn’t expect it from science.” In similar style, State Department staffers were warned against investigating the origins of COVID-19. Four State Department officials said they were warned against a probe of the lab-leak theory because it would open a “Pandora’s box.”

When the officials asked what they could reveal, the State Department’s Office of Biological Policy Staff Director Christopher Park told them to say nothing that could point to the American government’s own role in gain-of-function research. The staffers were shocked that a government official could “make an argument that is so nakedly against transparency, in light of the unfolding catastrophe.”

Biden adviser Fauci, head of the National Institutes of Allergy and Infectious Diseases (NIAID) since 1984, labeled an April 16, 2020, email “conspiracy gains momentum” and linked to a Fox News story claiming the pandemic originated in a Chinese lab. The next day, in a White House news conference, Fauci said a study by “highly qualified evolutionary virologists” confirmed that it is “totally consistent with a jump of a species from an animal to a human.”

Fauci’s main challenger in Congress has been Sen. Rand Paul, a medical doctor. In late May, when Fauci was coming under fire, somebody sent Paul a package of mysterious white powder. The envelope bore a picture of a bandaged Paul with a gun to his head and a death threat printed below. In a statement, Paul said: “I take these threats immensely seriously. I have been targeted multiple times now.”

Before Fauci hit stride in 2020, Dr. Nancy Messonnier, director of the CDC’s National Center for Immunization and Respiratory Diseases (NCIRD), took the lead on pandemic news. In a series of telebriefings from January into March, Messonnier praised China and named the “Wuhan market” as the source of the deadly “new virus” for which there was no immunity.

When asked about travel from Wuhan, Messonnier, told reporters that was “not something that I’m at liberty to talk about today.” The CDC official didn’t reveal which government official was laying down the rules.

Biden advisers planned a high-profile role for Messonnier, but she was reassigned in April, and in May, she resigned from the CDC. Messonnier now serves as the executive director for pandemic prevention and health systems with the Skoll Foundation. She leaves behind many questions about the destructive pandemic that the CDC failed to prevent and proved ill-equipped to manage.