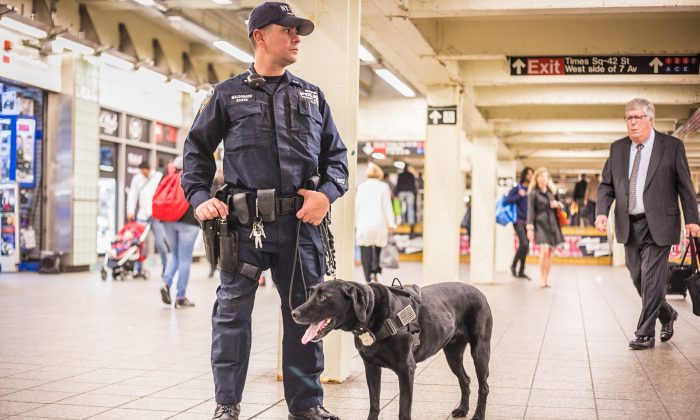 NEW YORK—On your average weekday, the New York City subway sees more than 5.6 million people pass through it, and in all of 2015, it saw more than 1.7 billion riders. These trains sometimes have people packed elbow-to-elbow, yet your average New Yorker is probably more concerned about stalls from signal problems than about terrorist threats.

So why is it that commuters don’t have to walk through metal detectors or take off their shoes each time they hop on a train? And how is it that people can go about their rides with a general sense of ease, in a city that just over a decade ago witnessed the worst terrorist attack the world has ever known?

Some of that thanks is owed to two police officers who transformed a scrappy unit, with a beat-up paddy wagon and a handful of dogs, into one of the most advanced K-9 units anywhere in the world.

“As far as counterterrorism goes, there is no other agency that I’ve encountered, especially here in the United States, that is as prepared as we are,” said Lt. John Pappas, commanding officer of the NYPD’s Transit Bureau Canine Unit.

On May 17, Pappas and Brenner were joined by several other officers in the Times Square subway station to give a demonstration of the dogs that are the core of this unit: floppy-eared Labradors, with wagging tails and keen noses.

These dogs are part of the NYPD’s “vapor wake” program. They’re bomb dogs, trained to detect explosives. But these dogs have additional training that started in New York just 10 years ago, and has drawn interest from police and military units the world over.

Your average explosive-detection K-9 gets a four-month training on how to locate bombs hidden in rooms or stuffed in bags. The NYPD’s vapor wake dogs are specially selected from these K-9 units, and given an additional year of training to locate explosives, not in bags or rooms, but carried on people.

“What we did is changed the actual unit for New York City, and customized it to be proactive rather than reactive,” Brenner said.

Officer Kevin Belavsky stood in one of the busier intersections at the Times Square subway station, while his K-9 partner, Ellis, circled around him on a leash, wagging his tail and happily trotting from person to person as commuters passed by.

Most people smiled and kept walking. Some stood to watch Ellis as he circled around, sniffing the air. Others on their cellphones looked briefly caught off guard, but quickly warmed up.

Then, Ellis caught something. A man and a woman walked by, Ellis pulled on his leash and briefly trailed the two, and officer Belavsky pulled back on the leash and gave Ellis a yellow ball as his reward. The whole scene was subtle, and unfolded in a flash.

The couple who walked by were officers helping with the demonstration, and carried a scent that Ellis had been trained to detect.

While it all seems simple, Brenner explained it took a lot of fine-tuning to bring the program to where it is now. He said “There’s no instruction manual on this. Nobody really does it.”

In 2005, the chief of transit and the police commissioner saw they needed a K-9 unit that could work specifically in transit, and on Jan. 1, 2006, the task to create this unit went to Pappas and Brenner.

Pappas said, “I started with a desk and a notepad and a pencil, and today I have one of the largest K-9 units in the world.”

Training K-9s for this work meant finding dogs that could work in noisy, crowded, and unpredictable environments.

This presented a problem. The explosive-detection K-9 units the NYPD had were accustomed to sitting in the backs of police cars, and so they had to handpick dogs that were up to the new challenge, and started bringing them into the subways for on-the-ground training.

Brenner said they found even the breed of the dog is important. In the early days, they were using German Shepherds. They found some people saw the dogs as intimidating. “The idea behind it is to keep people safe, and not scare people,” he said. Because of this, they found the Labradors were a better choice.

A lot of work also goes into strengthening the bond between the officer and the K-9. Each night, the dogs go home with their handlers, and when the dogs retire, they’re retired to the officer they worked with. Brenner said, “The dog becomes an extension of the handler, and that’s a major part of what we do.”

The NYPD now has five K-9 units, with over 100 dogs between them, and they’re planning to grow. When they’re not training, they’re working. And the work they do is in high demand, not just outside the city, but even among officers in the NYPD.

Pappas said the last time they held trainings for the K-9 unit, 180 officers signed up, and only 18 made the list once the rigorous vetting process was over.

As a testament to the program’s success, the demonstration on May 17 showed the K-9 units working without a hitch—even as a one-man-band, complete with drums and an electric guitar, played and sang in the background; and even as a man approached and ranted to one of the officers about Roswell conspiracies.

The vapor wake K-9 unit has come a long way. Pappas said in the early days, nobody knew who they were, and “a lot of people laughed because we had to improvise a lot of our equipment.”

Their K-9 vehicle used to be a repurposed prisoner wagon with nine dog kennels in it. The vehicle had faulty air conditioning, Pappas said, “so we had to drive with the doors open, and when we pulled up to training sessions with other agencies, they would laugh. They’d be like ‘What is that thing?'”

He said those laughs gradually died down, however. Once they proved the value of their work, they were able to get grants and modern equipment. Today, law enforcement offices from across the country and around the world come to learn new training methods from the unit Pappas runs.

Part of Pappas’s job is to ensure that every K-9 in his unit is trained to detect the latest threats and that officers everywhere are benefiting from the research he does.

“We’re here studying things that keep us up at night, very negative things, very horrible things, just analyzing them, to try to find a way to prevent those very bad things from happening to us here, whether it’s a crime or a terrorist act,” he said. “This is our job.”

When Paris police raided the homes of suspected terrorists in March, Brenner said within 12 hours he had photographs of the explosives that were found, and knew how they worked, and through this, he said, “I knew if my dogs were imprinted on that or weren’t. So it gives me a head start on preparation.”

“Let’s face it. September 11 was a wake-up call,” he said. “This is the mightiest police department in the United States, and we were humbled.”

“But it’s more than just New York City,” he said. “It happened to Paris, it happened to San Bernardino, it happened in Boston. All of those things mean something to me. I never want to see it, anywhere.”

Pappas said the work he and other officers do is about more than just keeping people safe. He sees this work as something that can break ignorance and dispel hatred.

After the terrorist attacks on Sept. 11, he said many were engulfed by fear and anger, and these can very easily lead to hate, and from that vantage point, “it’s very tempting to paint an entire segment of a population with one brush.”

“We hate what we fear, but the more we learn about it, the less we fear it, and the more we understand it,” he said. “So we can put that paintbrush down and say it’s not just that segment of the population. It’s these specific people. And the better you understand something the better you are able to cope with it.”

Pappas said, “Many of us, myself, Sergeant Brennar, and many of us who worked on September 11, we took that massive negative we carried around with us, all that negative energy, and we converted it into something positive like our K-9 program.”