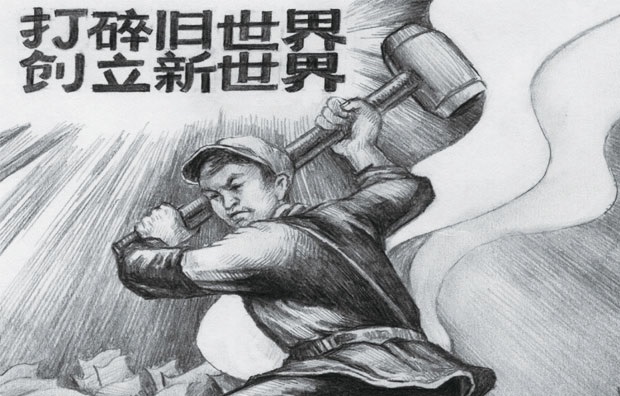 Adapted from a Cultural Revolution-era poster emblazoned with the words "Smash the Old World, Establish the New World." (The Epoch Times)
The Dead End of Communism

A deleterious philosophy based on struggle and destruction

In the age of “social justice” and other progressive creeds in prevailing Western discourse, the tragedies of millions of people in dozens of countries living under communist regimes are too often passed off as not being “real communism.”

While many still view communism as a noble philosophy that may yet be implemented given improvements in technology or human nature, its ideological foundations depict not a utopian dream but a necessarily violent and destructive teaching.

At the core of communism is the theory of class struggle between two main groups—the working class, or proletariat, and the ownership class, or bourgeoisie, according to Karl Marx and Friedrich Engels.

“All past history was the history of class struggles; these warring classes of society are always the products of the modes of production and of exchange,” wrote Engels in 1877.

The proponents of communist ideology typically used distorted and exaggerated language that radically inflamed any anger or resentment felt by members of the working class or other indigent members of society. In his epistolary exchanges, Marx frequently employed explicit profanity and racial slurs, attacking blacks and Jews among others.

As one academic abstract notes, “Marx’s profane mode of literary production presents an inversion of bourgeois subjectivity which reveals that while faeces is simply natural, capital is in fact disgusting.”

Employment was labeled “slavery,” while the relationship between employer and employee was labeled “warfare.” These uses pervert the conventional, neutral meanings of these words.

Marx and Engels considered the working class to be systematically exploited for their labor by the more powerful ownership class. They wanted to completely destroy this “capitalist” class.

“We call communism the real movement which abolishes the present state of things,” wrote Marx in 1845.

These two representatives of communist theory focused narrowly on the difficult economic experiences of a single group of people. They brushed aside the fact that there are a wide variety of people at all social levels with both positive and negative behaviors and impacts on society, from philanthropists to criminals. Those classified as “capitalists” often worked hard in important leadership positions and had valuable experience in the production and distribution of essential goods and services.

Despotism Over Body and Soul

“The proletariat will use its political supremacy to wrest, by degrees, all capital from the bourgeoisie, to centralize all instruments of production in the hands of the State,” reads the Communist Manifesto, the main text of communism, written by Marx and Engels.

Such property as businesses, land, bank accounts, housing and other assets, were to be confiscated by the working class and placed into “public” ownership.

The inherent contradiction is readily apparent. If ownership itself causes the exploitation of others, and the state becomes the sole owner of all the property and wealth in the entire nation, logically the state and its representatives are capable of exploiting their people. The property simply changed hands.

According to the article series “Understanding Conflict and War,” by R.J. Rummel, “the creation of public property, whether nationalized industry or public lands, does not alter the social relationships creating classes and class conflict.”

Under communist systems, Rummel added, “property ‘owned by the people’ is controlled by a few bureaucrats or managers who are given by the state authoritative control over the property.”

For years, those who escaped communism have shared their experiences of revolutionary soldiers seizing the life savings of their families, or their only means of making a living. Many people lost ownership of their homes and were suddenly forced to pay rent to continue to live there.

Communist Party officials naturally became exactly what they had criticized and fought against. However, their actions—forcibly taking everything of value from everyone and conducting mass executions—were much worse than the “crimes” of the previous ownership class they claimed contributed to poverty.

Another idea central to communism is materialism. This philosophy holds that nothing exists except physical matter verified by scientific experimentation. This philosophy encouraged the abandonment of religion, spirituality, and morality as the manacles imposed by an oppressive class.

“The philosophy of Marxism is materialism,” wrote Soviet communist leader Vladimir Lenin in 1913.

Yet morality is a key component of human civilization, and it forms the basis of the modern idea of human rights. Actions that violate another person’s rights are punished, since people can recognize they are inimical to civilized society.

Communism openly abandoned the concept of objective right and wrong, in order to justify its accusations against entire classes of people. The actions of an individual no longer mattered as much as his class background. Justice ceased to exist.

Arguably the most disturbing part of communist ideology is its embrace of ruthless violence in order to create and preserve a communist state. This is well-documented:

“There is only one way in which the murderous death agonies of the old society and the bloody birth throes of the new society can be shortened, simplified and concentrated, and that way is revolutionary terror,” according to Marx in 1848.

“The next world war will result in the disappearance from the face of the earth not only of reactionary classes and dynasties, but also of entire reactionary peoples. And that, too, is a step forward,” according to Engels in 1849.

“The state is an instrument for coercion … We want to organize violence in the name of the interests of the workers,” according to Lenin in 1917.

Violence is common in any transfer of power or revolution, but this outright encouragement of “revolutionary terror” in communist ideology created a frenzy of killing on a massive scale—at least 100 million lives starting with the Russian Revolution in 1917.

Entire categories of people were beaten, imprisoned, tortured, and executed—such as land owners, landlords, business owners, lawyers, doctors, teachers, intellectuals, religious and spiritual leaders, those with right-leaning political views, anyone who opposed the communist takeover, and others that were merely swept up in the struggle.

“The level of a regime’s civilization can be measured by the degree to which it uses violence,” states the “Nine Commentaries on the Communist Party” editorial series published by the Chinese-language edition of The Epoch Times.

“By resorting to the use of violence, the communist regimes clearly represent a huge step backward in the level of civilization.”

Communist theoreticians and revolutionaries thought differently. Marx described a “dictatorship of the proletariat” with “the proletariat organized as the ruling class” at the head of an egalitarian society.

In 1847, Marx wrote that “the working class, in the course of its development, will substitute for the old civil society an association which will exclude classes and their antagonism, and there will be no more political power properly so-called, since political power is precisely the official expression of antagonism in civil society.”

At this point, Marx argued that the state would start to wither away, and all social classes would disappear, because somehow the new rulers would be incapable of exploiting other people.

Results were always the opposite. This new ruling class consisted of normal human beings with both good and bad tendencies, who were certainly able to wield political power and rule as despots.

Former working class members were thus promoted to membership in the ruling class, filling the power vacuum created by the violent revolution. The individuals who seized power were often the least fit to hold it. They were rebels with an ideology that glorified violence and had little interest or competence in organizing or harmonizing complex social structures in every sphere of society. The Russian leftists and Bolshevik leaders who made possible Lenin’s victory in the revolution and civil war were ruthlessly purged by the Soviet secret police; in China, many of Mao Zedong’s closest companions—the men who had led the outnumbered and outgunned Chinese Communist Party to govern all of the mainland—became victims of the chairman’s crazed Cultural Revolution.

After the communist takeover of China in 1949, a civilization that once revered scholarly accomplishment and steady administration transformed into a regime that despised learning and ruled by whimsical decrees and mass political movements. Many Chinese communist leaders were illiterate or semi-literate and found it difficult to communicate even through simple notes and letters.

As ideological and revolutionary fervor replaced independent thought and traditional order, starvation and poverty followed closely. The tens of millions starved to death in Soviet, Chinese, and countless other man-made famines are the crass testament to this.

With little moral inhibition or independent sense of justice, communist leaders continued to deceive and manipulate—through control of the media and educational systems—to try to convince people everything was as it should be. Propaganda lay blame at the feet of external enemies, internal traitors, natural calamity, or even the masses themselves.

Communist countries have also arbitrarily subjected their citizens to artificial poverty—house arrest, imprisonment, forced labor—or even death for their thoughts or beliefs. Communist leaders took drastic measures to try to prevent people from escaping their systems, as the Berlin Wall did for over two decades.

In the Soviet Union, people who applied for visas were often persecuted, jailed, or placed in psychiatric wards. Even citizens traveling by train within the country were often required to show paperwork explaining the nature of their travel before buying a ticket. Something as simple as a road map became classified, so people could not easily find the border.

At this point, the new communist ruling class had actually acquired and concentrated every facet of power that exists—all the force, all the wealth, and all the knowledge. Once absolute power had been achieved and the corruption of the most powerful communist leaders made them a powerful interest group, the goals of communist leadership quickly shifted to maintaining that power at all cost.

With the short-lived exception of the Cambodian Khmer Rouge regime, communist states that do not collapse undergo reforms to preserve one-party rule. In China, the world’s largest remaining communist country, the Party was willing to abandon direct central planning and embrace some capitalist economic practices—the policy it terms “socialism with Chinese characteristics.”

Far from eliminating poverty, communist-controlled China has developed one of the world’s most serious income gaps. Hundreds of millions of Chinese live in poverty—particularly in the western and inland provinces—and disenfranchised migrant workers form an underclass the size of the U.S. population. Meanwhile, Party cadres have lined their pockets with embezzled money and moved trillions to offshore banks and investments.

“This is not a benevolent autocracy. This is a hard, relentless, unforgiving dictatorship near to an all-out totalitarian state,” said Stein Ringen, a Norwegian political scientist and Oxford emeritus professor at a speech on China at USC on March 2.

From past to present, many have professed lofty goals about changing the world for the better. Communist movements around the world have extinguished liberty and imposed absolute dictatorship, ostensibly for the sake of “equality” and “utopia.”

But as Lord Acton noted, “Men cannot be made good by the state, but they can easily be made bad. Morality depends on liberty.”