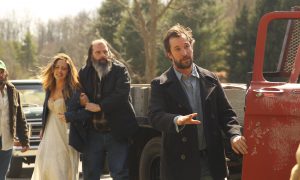 ‘The Dead Lands’: The Deadly Maori Art of Mau Rakau

You may not be familiar with the Maori martial arts discipline of Mau Rakau, but there is a reason it translates as “to bear a weapon.” Viewers will see just how lethal paddle-shaped patus and assorted traditional spears can be when a teenage Maori follows his father’s killer through a shunned stretch forest in Toa Fraser’s “The Dead Lands.”

This is New Zealand before contact with Europeans, but it is not necessarily unspoiled. Something so horrific happened in the so-called Dead Lands, the various Maori tribes avoid it at all costs. The exact details remain hazy, but everyone believes the old, ferocious figure known simply as “the Warrior” was intimately involved in the atrocity. Just about everyone will travel days out of their way to avoid his territory, but not Wirepa, who just barges through.

The arrogant young son of a tribal chief has just manufactured a grievance against their rival tribe. His subsequent sneak attack nearly wiped out all of Hongi’s people and killed his father, the peace-loving chief. Nobody ever thought the clumsy Hongi would ever amount to much of a warrior, but he will have to develop his skills quickly to avenge his people.

With the encouragement of his grandmother’s aggrieved spirit, Hongi forges an alliance with the fearsome Warrior (with a capital “W”), who does not appreciate the entitled Wirepa traipsing through his territory. Despite his profoundly antisocial nature, the Warrior will take Hongi under his wing, teaching him the deadly art of Mau Rakau.

“Dead Lands” is bound to offend some viewers because its vision of pre-contact Maori is all about fighting. Yet that is not such a bad strategy, since it allows the film to sidestep the awkward melodrama of a “Rapa Nui.” It certainly makes viewers reluctant to hassle anyone carrying a patu with authority, which is something the film can hang its hat on.

Indeed, the Mau Rakau fight scenes choreographed by cast trainer and co-star Jamus Webster are spectacularly cinematic. The imposing Lawrence Makoare (a veteran of “The Lord of the Rings” franchise and “Marco Polo”) is an especially effective action figure, who seems ripe for a cult following after all the glowering and hacking-and-slashing he does as “The Warrior.”

James Rolleston and Te Kohe Tuhaka also go at it with admirable vigor as Hongi and Wirepa, respectively. Frustratingly, Raukura Turei displays impressive Mau Rakau chops and real screen presence as Mehe, a lady warrior and potential love interest, but she is forced to make a rough entrance all too quickly after the film introduces her.

There is probably plenty of ethnographic hand-wringing to do over “Dead Lands,” but the action scenes are cool, and it provided a lot of work for Maori actors and craftsmen. In its way, it should inspire widespread fanboy appreciation for the time-honored practice of Mau Rakau. Fraser gives it all a strong sense of place and nicely instills a mood of mystery and foreboding.

Recommended for fans of “Warriors of the Rainbow: Seediq Bale,” “The Dead Lands” opens Friday, April 17, in New York at the Village East.