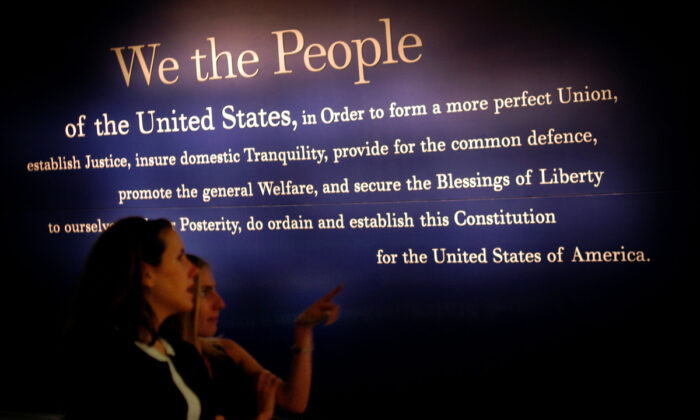 The Constitution Offers Ways Out of the Election Mess

The 2020 presidential election was a disaster. Claims of corruption and unfair manipulation abound. Lawsuits are multiplying. Recounts impend. Some say we may never know what the results would have been in an honest election.

They also would be better than having the next president—whoever he is—serving under suspicion of illegitimacy and fraud.

Now, let’s start at the beginning:

First, recall that we don’t elect the president directly. On Nov. 3, we voted for presidential electors—collectively known as the Electoral College—who will choose the president and vice president next month.

The Constitution tells us that the principal rule-writers for presidential elections are state legislatures. Article II, Section 1, Clause 2 says that presidential electors in each state are appointed “in such Manner as the Legislature thereof may direct.”

But the Constitution also limits that power in several ways. One limit is a ban on extended elections, where people cast ballots at different times or over an extended period of time.

As this year’s experience shows, extended voting allows for political mischief and is inherently unfair.

Mischief arises when candidates can give early voters one message and later voters a different message. It can arise near the end of an extended election if only a critical few haven’t cast their ballots. Campaigns have incentives to bribe or intimidate the remaining few.

Extended elections are unfair because early and late voters have different information. This year, for example, additional evidence arose—while voting was actually in progress—that allegedly showed Biden was involved personally in his family’s influence-peddling scheme. At least some later voters knew this; early voters could not.

Over the period of an extended election, the personnel administering it may change. Even if this doesn’t happen, officials may alter their practices or otherwise treat earlier and later voters differently.

For reasons such as these, the Founders rejected extended elections. The Constitution has a provision called the Same Day Clause (or Presidential Vote Clause). It states as follows:

“The Congress may determine the Time of chusing [sic] the Electors, and the Day on which they shall give their Votes; which Day shall be the same throughout the United States.”

If you read the Same Day Clause carefully, you can see that it grants Congress two powers: First, Congress may name a single day when all presidential electors vote. Congress has exercised this power (U.S. Code, Title 3, Section 7). In 2020, the day is Dec. 14.

Second, Congress may fix the “Time” we choose presidential electors—that is, when we all go to the polls. The singular form of “Time” tells us that the time Congress selects must be the same nationwide.

Congress has exercised this power—but (as we shall see) not entirely. U.S. Code, Title 3, Section 1 states:

So the law is clear. We may vote for presidential electors on the first Tuesday after the first Monday in November, and only then.

But this year, in our collective arrogance, we decided to disregard the Constitution and the law passed under it. Instead, we opted for mail-in voting extending over weeks.

Perhaps this isn’t surprising, given the modern view that we are far wiser than the Dead White Males who adopted the Constitution—or even than members of Congress who, in 1948, adopted the federal statute.

State authorities may respond that they used Nov. 3 as a cutoff date for receiving ballots—even though some, apparently, were counting ballots cast later. But a cutoff date isn’t the same as a “Time of chusing Electors.” In 2020, the time of choosing electors sprawled over weeks, and the periods were not uniform from state to state, as the Constitution and federal law require.

The results were just as the Founders would have predicted: Different information was available to those voting at different times. Some officials apparently manipulated the processes of sending out, gathering, and counting mail ballots. Poll watchers, even when permitted to observe, had an impossible task.

It seems those Dead White Males were right after all.

The Constitution offers two ways out of this mess—both better than the alternatives.

One is for Congress to call a new presidential election. After all, Congress set the current uniform time, and it can amend the law to provide another. Thus, Congress could specify that this year only, the choice of presidential electors will occur on the first or second Tuesday in December—or even later. Depending on the day selected, Congress may have to postpone the day the Electoral College votes.

Any new election would be limited to voting for presidential electors. All other Nov. 3 results would stand.

It’s true that Congress might authorize a voting period of more than one day. But because Congress must select a Time (not “Times”), those days would have to be consecutive. And because it would defeat the fundamental purpose of the Same Day Clause to extend voting much beyond two or three days, there would be no time for mail-in ballots.

If Congress moves fast enough, the identity of the next president can be known weeks before he’s due to be inaugurated on Jan. 20.

Practically, however, Congress is unlikely to call a new election. That is because the House of Representatives is under Democratic control, and Democrats can assume that the current trend of events will make Biden president without a new election.

But the Constitution and federal law offer other, simpler options.

As noted above, Congress has exercised only part of its power to fix the time for choosing presidential electors. It has left the rest up to the state legislatures. U.S. Code, Title 3, Section 2 provides:

So if a legislature becomes convinced its returns are hopelessly muddled or corrupt, it may arrange a new way of choosing presidential electors.

Unlike the House of Representatives, the legislatures of most of the disputed states—Pennsylvania, Georgia, and so on—have Republican majorities. So they aren’t likely to be pleased with the media-driven trend toward Biden.

If a legislature becomes convinced its state’s election was corrupt, the legislature has at least two options:

One objection to a new election is the burden placed on officials. No doubt they would have to work overtime. But voter lists already are prepared. Extensive prior experience guides officials, for the paper ballot method was employed for centuries. Polling places can be secured as they always have been. Voting and counting would proceed, under the eyes of poll watchers, in the good old-fashioned way.

Admittedly, election officials and the military may have to work out a system of same-day voting (perhaps electronic or by proxy) for absent service members.

Some may grumble about having two elections in two months. But voters in other countries deal with serial elections. Israelis recently faced three in less than 11 months.

Others may grumble about having to get off their duffs and go to the polls. If neighbors or family members have no transportation, we may even have to drive them. Imagine that.

But we’re Americans. We can do these things. We did them for centuries. The only difference this year is that we’d have to wear masks.