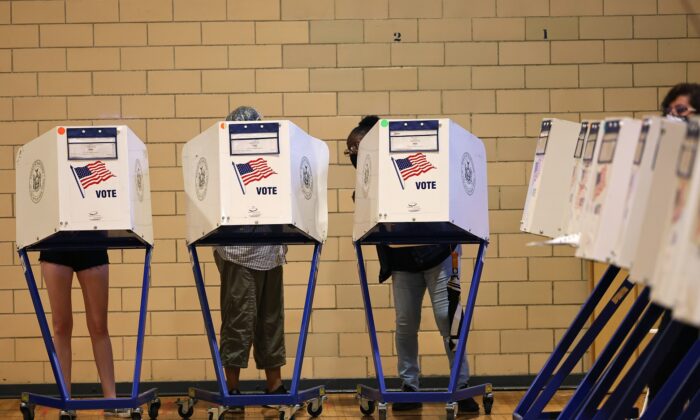 People vote during the Primary Election Day at P.S. 249 The Caton School in the Flatbush neighborhood of Brooklyn borough in New York City on June 22, 2021. (Michael M. Santiago/Getty Images)
Viewpoints

This column is not about relitigating the 2020 election. President Joe Biden is the duly certified U.S. president. Period. Now, let’s talk about the mess in which we find our election system. Let’s talk about voter fraud.

It does exist; claims to the contrary are incorrect. And discussions about voting integrity matter because we have about one year to decide how to avoid the confusion and controversy surrounding the 2020 election.

“Flagrant” election fraud has been “documented throughout this nation’s history,” according to the U.S. Supreme Court. And so it goes today. Voter fraud never went away; it just got more sophisticated. Both political parties have suffered.

Thousands of recent cases of voter fraud have been identified, and more than 1,000 people have been criminally convicted of trying to sway elections through bribes, intimidation, duplicate voting, impersonation of another, or manipulation of absentee ballots. Judicial findings of election fraud have overturned contests in California, Missouri, Georgia, Texas, and other states.

Facts are facts, yet it has somehow become taboo to even mention ways to strengthen election laws. Suggest that states should follow federal law and more diligently purge voter rolls and risk being charged with “voter suppression.” Recommend that all states require voters to show ID, as is the current practice in 34 states, and risk being labeled “racist.” Seems as though any proposal to ensure election integrity is automatically condemned as “discrimination” against minority groups or low-income citizens. Details on exactly how these proposals might discriminate seem vague.

Look, we need to determine exactly how this nation’s population should cast votes. In person only? Vote exclusively by mail? Should Election Day be changed to Election Week? It is a dense subject but, please, let’s not follow the 2020 paradigm.

As a runup to the pandemic-plagued 2020 election, nine states and D.C. decided to mail out absentee ballots to all registered voters. That totaled 44 million ballots floating around, at risk of being lost, put in the wrong mailbox, or stolen and returned with unauthorized votes. In addition, 34 other states sent a ballot to anyone who asked, no excuse required. The infrastructure to deal with all that paperwork simply didn’t exist. Within the chaos the opportunity for fraud was ripe.

We now know that in the 2020 election more than 90 million absentee ballots were mailed out. Fifteen million went “unaccounted for,” more than a million were “undeliverable,” and 560,000 were rejected for various reasons. So much for one person, one vote. There’s got to be a better way.

So instead of repeating that fiasco, how about following the lead of the 45 states and D.C. that offer pre-election in person voting? It is held as early as 55 days before an election, or as late as the Friday before election day, and weekend days are often included. And since polls show 81 percent of Americans support voter ID cards, let’s require that too. With more time to vote and more fully identified voters, the chance for fraud is reduced. Citizens with special needs who cannot get to the polls can always get a mail-in ballot.

Also, if all states would purge their voter rolls of inactive, nonresident, or dead voters, that would help reduce the number of available names fraudsters could use to cast a ballot. But, beware, critics of voter reforms will always find some negative way to spin change.

Ohio, for example, published a list of 116,000 dormant voters who hadn’t voted for six years and didn’t respond to requests to confirm their residency. Activist groups wailed! The inactive were advised to either vote in the next election (2020) or confirm they were still eligible. Some 10,000 came forward to say they wanted to remain on the rolls. The media breathlessly spun that to say Ohio had “nearly purged 10,000 voters!” The state maintained it had lawfully reminded 10,000 citizens about their civic duty.

While the next election won’t choose a president, it will decide the all-important makeup of the U.S. House and Senate, along with many other state and local elections. Don’t we want the most accurate, uncorrupted vote counts possible?

Trust in the current election system has eroded. The clock is ticking to enact common-sense reforms. Can it happen before November 2022? Only if citizens demand it.