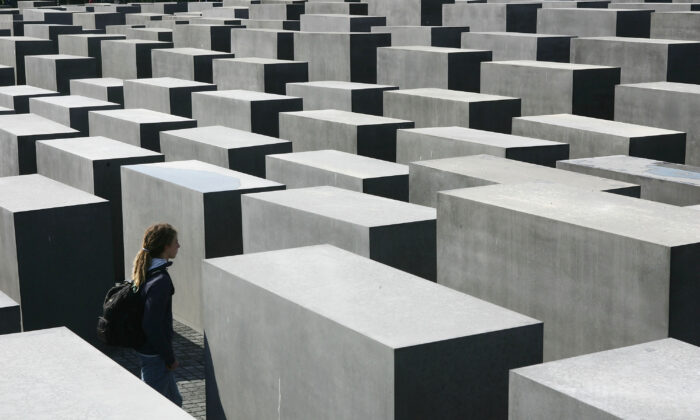 A visitor walks among the 2,711 stellae at the Memorial to the Murdered Jews of Europe on the first day of its opening to the public in Berlin, Germany, on May 12, 2005. The monument, a Holocaust memorial, was designed by American architect Peter Eisenman and commemorates the 6 million Jews murdered by the Nazis. The memorial has been a controversial project in the heart of Berlin 17 years in the making. Sean Gallup/Getty Images
Viewpoints

The Church, the Holocaust, and Soviet Disinformation

On Jan. 27, as part of Holocaust Remembrance Day, the United Nations will host an event in New York titled “Remembering the Holocaust: The Documented Efforts of the Catholic Church to Save Lives.”

The event is co-sponsored by Pave the Way Foundation (PTWF) and the Permanent Observer Mission of the Holy See to the United Nations.

PTWF is a non-sectarian organization dedicated to initiating exchanges between religions, identifying non-theological obstacles that separate religions, and eliminating the barriers of disinformation that lead to distrust between religions. The Permanent Observer Mission of the Holy See is, well, a diplomatic arm of the universal Catholic Church.

The event at the U.N. will bring together experts on the Holocaust, World War II, and wartime actions of the Catholic Church. The aim is to remember the victims and to discuss the efforts undertaken by the Catholic Church to save lives, especially Jewish lives. I have been invited to speak on the impact of Soviet disinformation aimed at discrediting Christianity and religion in general.

At the center of post-war disinformation was the Catholic wartime pope, Pius XII. Atheism was fundamental to Soviet communism, and after World War II, the Soviet government found itself with dominion over deeply Christian nations in Central and Eastern Europe. In order to advance their doctrine, Soviet leaders would have to undermine the Church. The best way, of course, would be to associate it with the Nazis. The pope was an early target.

On June 3, 1945, Radio Moscow announced that Pope Pius XII had been “Hitler’s pope,” and suggested that he had been an ally of the Nazis during World War II. This was the start of a calculated operation designed to smear the papacy, the Catholic Church, Christianity, and even religion itself, but it fell flat. The pope’s support for the Allies and aid to victims during the war was still a fresh memory. The people knew him too well for the accusation to take hold.

The Kremlin decided instead to focus on church leaders from the new Eastern European satellites. Croatian Cardinal Stepinac, Cardinal Mindszenty of Hungary, Cardinal Beran of Czechoslovakia, and Cardinal Wyszyński of Poland were among those who were indicted as having been pro-Nazi.

The cases varied slightly from one to the next, but in general, communist leaders initially seized power while comparing themselves favorably to these Christians—saying that they, like the church, stood against Nazism. Soon, however, the church leaders started creating problems, and they had to be removed. The easiest way was by associating them with the Nazis.

Consider the case of Cardinal Stepinac from Croatia/Yugoslavia. Before coming to power, the communists had used Stepinac’s speeches in their propaganda, as he often spoke against human rights violations committed by Croatian Nazis (The Ustaša). Now, however, he was a threat. In 1946, Yugoslavian leader Josip Tito had him arrested and charged with helping to organize Nazi crimes, collaboration with the Nazi puppet regime, and responsibility for crimes committed by chaplains in that puppet army.

The Yugoslavs gave Stepinac a show trial, but the Western press recognized it as a fraud from the beginning. Many defense witnesses were prohibited from testifying, key prosecution evidence was manufactured, and witnesses were threatened. The courtroom was filled with agitators whose vocal demonstrations were heavily reported by the government-controlled media. Naturally, the court found Stepinac guilty, sentencing him to 16 years in prison.

After five years, Stepinac fell ill. Tito feared a worldwide backlash if he died in prison, so he ordered Stepinac to house arrest in his native village of Krasic. He stayed there until he died on Feb. 10, 1960. Years later, tests indicated that he had been slowly poisoned, presumably by his captors.

Twenty-five years after his death, the prosecutor finally acknowledged that Stepinac had been framed and that he was tried only because he refused to sever ties with Rome. The prosecutor said that if Stepinac had agreed to head an independent Catholic Church, he wouldn’t have been brought to trial.

Another senior legal official who had helped put together the case against Stepinac added, “The indictments were designed rather more for publicity than for legality.” In 1992, Croatia emerged from under the thumb of communism, and one of the first acts of Parliament was to issue a declaration condemning the framing and “the political trial and sentence passed on Cardinal Stepinac in 1946.”

While the Soviets were able to frame Stepinac and other Christian officials by using judicial systems that they controlled, the same couldn’t be done with the pope. He was not under their thumb. So they waited until he died and then began a massive disinformation campaign against him, centered around a play entitled “The Deputy.”

At the liberation of Rome in 1944, the end of the war in 1945, and at the time of his death in 1958, Pius XII was hailed for his moral leadership, opposition to the Nazis, and support for the Jews. Tributes came in from around the world, including from most significant Jewish groups.

By 1963, however, he was branded as a silent observer, if not an active participant, in genocide. The common explanation for how this happened is the play, a fictionalized story attributed to a German playwright named Rolf Hochhuth.

Although it was fictional, Hochhuth claimed that the play was based on “provable facts,” and there was an appendix arguing that the depiction was justified by the historical record. That was a brilliant tactic. When historians pointed to clear errors, defenders of the play could explain them away as literary license. It was, after all, admittedly fiction. Yet it also claimed to be essentially true.

The former head of Romanian Foreign Intelligence for Communist Romania, Ion Mihai Pacepa, explained how he and others framed Pius XII with the play. Other events surrounding “The Deputy” support his account.

The German producer of the play, Erwin Piscator, had long acknowledged his desire to use theater to advance the communist cause; he even staged plays under orders from the Communist Party. He reworked “The Deputy” from an eight-hour monstrosity that seemed to have been written by a committee in the Kremlin into a more manageable two-hour production.

The U.S. producer who brought “The Deputy” to Broadway had been fined and given a suspended criminal sentence by the House Un-American Activities Committee due to his communist ties. The American publisher of “The Deputy” was an acknowledged communist who specialized in radical books. Many of the early positive reviewers had communist ties. At least one was paid by the KGB. Another was a former KGB spy. (This, by the way, was at a time when few Americans would admit to communist ties.)

Hochhuth, to whom authorship is usually attributed, was a logical target for a KGB-style operation. He was an unknown writer who had never published a play, and his research methods were sloppy at best (resulting in a significant legal verdict against him for his work on a different play). After “The Deputy” was written, he worked closely with his lifelong friend, noted Holocaust denier David Irving, whom Hochhuth has frequently defended.

In 1969, a top-secret British intelligence report got it right. It said, “There are various grounds for suspecting, but no real proof, that Hochhuth’s and Irving’s activities are part of a long-term Soviet ‘disinformation’ operation against the West.”

Another declassified secret report said: “it can also be argued … that Hochhuth is engaged in some ‘decomposition’ exercise and that he is attempting to destroy the fundamental value of a free society, from its religions to its heroes.”

Once one realizes that “The Deputy” was a Soviet plot designed to discredit Christianity and religion in general, it becomes much easier to understand how a theatrical play could change the perception of Pius XII, from the “great benefactor of humanity,” to something far more sinister.

Disinformation is so effective that, even today, many readers are convinced that Pius XII and Stepinac were crypto-Nazis, or something along those lines. Understand, however, that the information about them (and others) has been intentionally shaped to smear their reputations and through them their church, and even the very concept of religion. Conclusions based on that information are faulty.

The event at the United Nations is a small step toward undoing the disinformation and correcting the historical record. I am honored to be part of it.