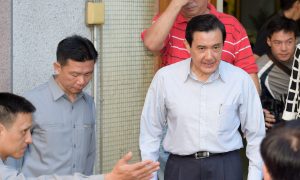 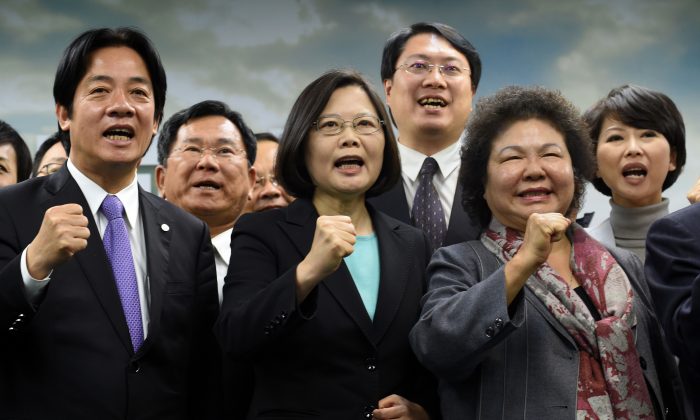 This article was originally dispatched as part of Epoch Times’ China email newsletters. Subscribe to the newsletters by filling your email in the “China D-brief” box under this article.

It’s been obvious that the Chinese Communist Party (CCP) has been trying to send a message to Taiwan. Over the last couple months, these warnings have gone from vague, to obvious, to plain as day—and this very likely has something to do with Taiwan’s 2016 presidential elections leaning in a direction it doesn’t want.

Between late May and early June, the CCP’s People’s Liberation Army (PLA) held several military exercises, which IHS Jane’s said simulated an invasion of Taiwan. During the drills, an image released by Chinese media showed a PLA officer giving a briefing behind a “digitally barely concealed map of Taiwan.”

As IHS Jane’s reported, the military exercises coincided with Tsai Ing-wen, the candidate for Taiwan’s Democratic Progressive Party, visiting the United States between May 29 and June 3.

In other words, the drills were meant as a warning, with Wen’s presidential campaign as their target.

These warnings soon got louder. CCTV, one of the official mouthpieces of the CCP, aired a video on July 5, which showed a military drill in Inner Mongolia, where its troops attack a building that looks strikingly similar to Taiwan’s presidential office.

The drills caused a stir in Taiwan. The Focus Taiwan news outlet paraphrased a quote from a defense ministry spokesman, Lou Shou-he, saying “The drills hit home for Taiwanese.”

And again, the message was clear. As Quartz stated in a July 23 article, “The video is full of political symbolism.” It notes the upcoming elections and Tsai’s likely victory, stating “some suggest that the simulated attack is China’s way of reminding Taiwan that it will make good on its promise of invading if Taiwan declares independence.”

Then, perhaps fearing that Taiwan still hadn’t caught their drift, the CCP came out directly with its line in early August. The statements were from Zhang Zhijun, head of China’s Taiwan Affairs Office and the CCP’s top policy maker in Taiwan.

Zhang stated, according to Reuters, that Taiwan could keep its ties to the CCP and “enjoy the peace dividend,” or it could return to its “evil ways” of independence.

Its important to understand the political climate in Taiwan, and why the CCP isn’t happy about it.

The incumbent, Ma Ying-jeou, is part of Taiwan’s Nationalist Party, which is widely criticized for being too friendly with the CCP.

According to opinion polls, Ma is about 20 points behind Tsai, and Tsai’s party is openly opposed to the CCP’s efforts to absorb Taiwan. Forbes reported that Ma’s nationalist party faces almost certain defeat to Tsai.

Taiwan is a kind blemish in the CCP’s propaganda, which trumpets phrases like “there would be no new China without the CCP.” With a democratic Taiwan just across the channel, Chinese people can roll their eyes, look at Taiwan, and see a modernized Chinese society that functions just fine without totalitarian rule.

The CCP was making a lot of headway in its plans, with programs promoting subtle propaganda meant to change how Taiwanese people view themselves and the mainland. These include referring to Taiwan as “China’s Taiwan,” and referring to the CCP’s plans to take over Taiwan as “peaceful reunification.”

There were even some large-scale protests in early August over recent changes to Taiwanese history textbooks. History teacher Chang Wen Lung told Reuters the textbooks have “warped historical episodes such as agreements establishing Republic of China sovereignty over Taiwan after World War Two and denigrated the influence of Japan, the island’s colonial ruler for decades prior and traditional foe of Beijing.”

The Christian Science Monitor did a good job explaining the significance of these protests:

“The protests are the largest in Taiwan in more than a year and reflect a growing shift on the island from cultural identification with China to a more Taiwanese identity,” it states. “They also reflect a new activism by younger generations first seen in Taiwan’s ‘Sunflower movement’ in 2014 and more recently in Hong Kong’s ‘Occupy Central’ movement that challenged Beijing’s rules on elections.”

With the upcoming elections, it’s looking like the CCP’s efforts to slowly reel in Taiwan could soon fall apart.

The Straits Times, a Singapore-based news outlet, summed up the looming reality for the CCP in a recent headline: “Beijing braces itself for a less friendly post-Ma Taiwan.”

The story includes some folks at the head of the CCP’s plans to absorb Taiwan lamenting about the likely shift in politics, which could uproot the CCP’s efforts.

“(Cross-strait relations) won’t be smooth sailing all the way from now on,” said Chen Deming, president of China’s Association for Relations Across the Taiwan Straits, according to The Straits Times.