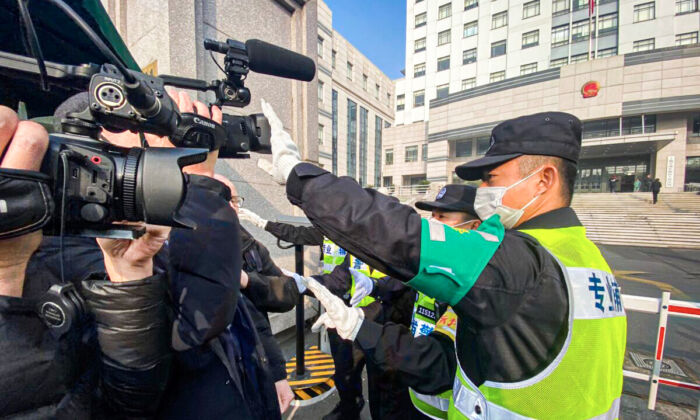 The Chinese Regime Is the ‘World’s Biggest Captor of Journalists’: Report

The communist regime in China is conducting an “unprecedented campaign of repression” against journalism, according to Reporters Without Borders (RSF).

At least 127 reporters are currently detained in China, the “world’s biggest captor of journalists,” the journalism advocacy group said in its latest report released on Dec. 7.

The report, titled “The Great Leap Backwards of Journalism in China,” indicated the regime viewed journalism as a state propaganda tool, instead of providing information for the public.

The Communist Party has made China a model of society in which “freely accessing information has become a crime and to provide information an even greater crime,” said the Paris-based organization.

“The number of taboo topics keeps rising,” read the report. “Not only those typically deemed “sensitive”—such as Tibet, Taiwan or corruption—are subject to censorship, but also natural disasters, the #MeToo movement or even recognition of health professionals during the Covid-19 crisis.”

Those who cover sensitive topics or refuse to comply with the official narratives face intimidation, harassment, and years of detention “in unsanitary prisons, where ill-treatment can lead to death,” said RSF.

Among them is Zhang Zhan, a former lawyer turned journalist who is serving a four-year term behind bars for reporting about the early COVID-19 outbreak in Wuhan.

The 39-year-old Zhang traveled to Wuhan in Feburary to record the chaotic scenes unfolding at the pandemic’s epicenter during its initial lockdown. She detailed her visits and interviews conducted at hospitals, quarantine centers, and the Wuhan Institute of Virology in dozens of shaky cell phone videos uploaded on YouTube, challenging the Chinese Communist Party’s (CCP) narrative that the outbreak was under control.

She was later charged with “picking quarrels and stirring up trouble,” a charge often by authorities against dissidents and whistleblowers.

The report mentioned that “China’s intimidation of foreign reporters, based on surveillance and visa blackmail, forced 18 of them to leave the country in 2020.”

A Chinese staff member at Bloomberg’s Beijing bureau, Fan Haze, has been detained since last December. She was taken away by plainclothes police from her home in Beijing allegedly on suspicion of endangering national security.

Journalists from the BBC and the Los Angeles Times, and Dutsche Welle suffered physical harassment for covering the aftermath of flooding in central China’s Henan Province earlier this year. The RSF report noted the attacks were encouraged by the Communist Youth League of China.

RSF also indicated that Beijing’s crackdown has extended in Hong Kong. The former British colony had been a media hub for international outlets in Asia, but now has a growing number of journalists in jail in the aftermath of Beijing’s imposition of the national security law in June 2020.

A reporter with the Hong Kong edition of The Epoch Times in May was attacked with a metal bat by an unidentified man near her apartment building.

The facilities of The Epoch Times in Hong Kong, one of the few independent outlets in the city, have also been repeatedly attacked. Its printing plant was damaged by four hammer-wielding intruders in April. Less than two years earlier, the same printing press was set on fire by four masked individuals.

RSF ranks China 177th out of 180 in the 2021 World Press Freedom Index, “just two places above North Korea, a country in which journalism is synonymous with state propaganda.”