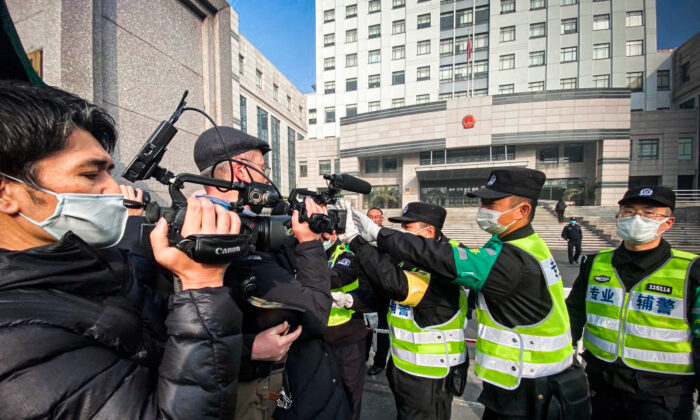 Jailed Chinese Journalist Who Reported on Wuhan Outbreak Might Not Survive the Winter, Family Says

A family member of a jailed citizen journalist in China has warned that she may not survive the winter as a result of a 16-month hunger strike and the resultant force-feeding.

Zhang Zhan, a 38-year-old former lawyer, was sentenced last December to a 4-year prison term for reporting on the early stages of the CCP Virus outbreak in Wuhan. She is now on the brink of death, according to her family.

Her Shanghai-based brother Zhang Ju recently bypassed China’s Great Firewall and posted more than a dozen tweets about her since Oct. 29. He said Zhang, who’s been on a prolonged hunger strike, now weighs less than 88 pounds, and is in desperate need of medical care.

“I don’t think she could last a long time,” Zhang Ju wrote on Oct. 30. “I wish the world would remember what she looks like if she fails to survive this coming cold winter.”

On the same day, Zhang Zhan’s mother described her as critically ill and weak after having seeing her in a virtual meeting, media outlets reported.

“[She’s] worse than before,” said Zhang Zhan’s mother. “[She] needed to be supported for walking. And had difficulty in raising her head during the talk. [It’s] extremely dangerous if she isn’t allowed to leave for medical treatment.”

After the meeting, the mother said she was in tears for hours.

The posts by Zhang Zhan’s brother sparked an outpouring of support from Chinese rights lawyers, dissidents, and rights groups. Many posted images of themselves holding signs that read in Chinese “Save Zhang Zhan” or “Free Zhang Zhan” on Twitter.

Europe-based rights activist Lin Shengliang told The Epoch Times on Nov. 1 that he hoped Zhang would “continue to stay alive and witness the absurdity of our times.”

Her heavy 4-year term by Chinese authorities signaled that the Chinese communist regime continued to cover up its crimes in handling the pandemic, Lin noted.

“I call on more people to voice their support,” the activist said. “To speak up for her is speak up for yourself.”

New York-based China human rights lawyer Wu Shaoping said in a Nov. 1 interview with The Epoch Times that the Zhang case had caught much attention throughout her arrest, struggle, prosecution, hunger strike, and conviction.

“I’m surprised and anguished at her current situation,” Wu said. “Imaginably, her mother and brother will feel much more pain.”

The lawyer added that it must be out of despair that her brother bypassed China’s Great Firewall and spoke out on Twitter because her family is suppressed and silenced in China.

“Life above all else,” Guo Yuhua, a professor of sociology at Beijing-based Tsinghua University, wrote on Twitter on Oct. 29. “Please immediately grant Zhang Zhan compassionate release!”

Zhang, originally from Shanghai, traveled to Wuhan in February 2020 to cover the chaotic scenes unfolding in the pandemic epicenter, questioning the authorities’ handling of the outbreak.

Armed with a smartphone, Zhang, for three months, conducted interviews with Wuhan residents and paid visits to hospitals, makeshift quarantine centers, and the Wuhan Institute of Virology.

In May she was taken away by Shanghai police from her hotel room and was transferred back to Shanghai, and held in detention. She was later charged with “picking quarrels and provoking trouble,” a catch-all charge commonly used by the Chinese Communist Party to suppress dissent.

On Dec. 8, her lawyer Zhang Keke disclosed she refused to plead guilty and had been on hunger strike for five months in protest of allegations against her. She had also experienced forced feeding, being shackled and put in constraints for 24 hours, the lawyer said.

“Every single day is suffering,” the lawyer quoted his client, who was in tears throughout the talk with him, according to ChinaAid, a Washington-based nonprofit.

On Dec. 28, she appeared in court in a wheelchair, was convicted and sentenced to four years in prison.

Her lawyers, however, told media after the trial that the public prosecutor merely listed the core evidence, but did not provide the actual evidence to the court. So the lawyers were not able to ascertain the specific case against Zhang.

Zhang is among several whistleblowers and citizen journalists who sounded the alarm about the severity of the Wuhan outbreak, and were punished by the regime as a result. In a high-profile case, Chinese doctor Li Wenliang was reprimanded by police in early 2020 for warning about a SARS-like virus in a private chat group. He later died of the CCP Virus.

Zandra Yi contributed to this report.