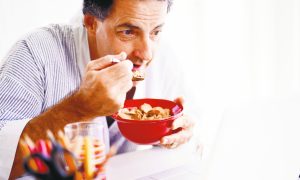 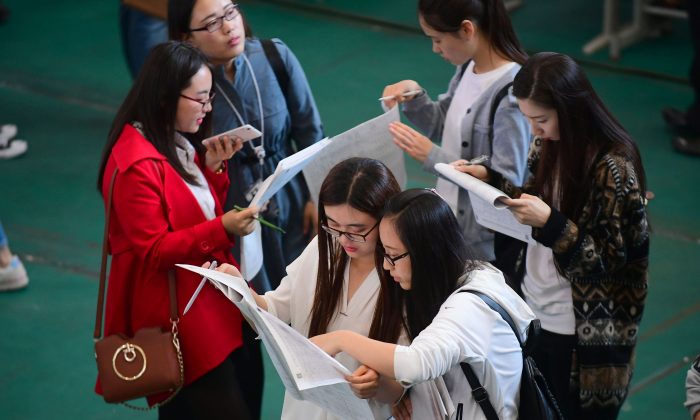 Young adults looking at postings at a job fair at Shenyang Aerospace University in Shenyang, in China's northeast Liaoning Province on May 13, 2017. (China OUT/STR/AFP/Getty Images)
Thinking About China

The Chinese Regime Is Losing the Millennials

China ramps up the propaganda to its youth, but fewer are listening

The Chinese Communist Party (CCP) has a tremendous generational problem on its hands. Millennials aren’t behaving in the expected or traditional Chinese manner.

A growing number of China’s young people are moving away from what could be considered traditional Chinese attitudes, which include changing views on authority, the Party, marriage, families, and how they seek to live their lives.

Often, that puts them in direct opposition to the CCP.

The CCP’s most urgent and long-term challenge is the country’s contracting demographics. Many Chinese millennials just aren’t having children—not even one child that prior generations did and which state planners took for granted. The causes aren’t hard to define: Four decades of the one-child policy has led to a dramatic fall in the country’s birthrate.

The one-child policy, instituted in 1979, has had a larger effect than what was intended. While it did curb China’s population, the CCP’s enforcement of the policy was draconian and inhuman. Mass forced abortions and sterilizations, as well as stiff economic fines, were directed against women for having more than one child. These harsh measures went a long way toward reshaping Chinese women’s outlook on traditional roles, including marriage and childbearing.

Another related factor is education. For the past two decades, women have outnumbered men at China’s universities. Young, highly educated, and in well-paying jobs, they value their careers and financial independence over getting married and having children.

Marriage Crisis and the Economy

Nonetheless, for a growing number of China’s millennials, the ancient tradition and institution of marriage and family has fallen by the wayside. In just the past five years, marriage rates have fallen 30 percent. Many millennial women now view marriage as an artifact of the past, when marriage was necessary just to survive.

The effect of this decline poses a threat to the Chinese way of life. Ironically, reducing the birthrate was once considered critical for China’s development; now, it’s plaguing the long-term future of the CCP and the country’s economy.

That’s why the Chinese leadership is especially desperate for young people in middle- and upper-income brackets to have children—at least one, if not more. As the CCP seeks to move China into a high-value producer economy, it will need more high-consuming citizens, not fewer. Peasants and unskilled or uneducated workers simply don’t have the buying power of China’s middle class.

Even the most strident command economy apologist knows that it’s difficult to grow an economy with a shrinking consumer base. This demographic trend also will put a lot of pressure on social services as well as on children forced to care for their aging parents.

Additionally, with many having lived abroad, China’s millennial women desire a different way of life. They’re pushing back against state propaganda, and rejecting the traditional expectations of marriage and children, in favor of delaying or even avoiding both. Their ideals of happiness and fulfillment differ sharply than those of prior generations.

Once U.S. television shows and movies became accessible in the early 1990s, they heavily influenced the views and ideals of Chinese youth. Yang Gao, a Singapore Management University sociologist who researches foreign entertainment’s influence on Chinese youth, observed that American TV is “massively popular” among the Chinese younger generation.

The reasons aren’t surprising. Young people find the individualist ideas of spontaneity, nonconformity, and self-realization very appealing. The common theme of standing up against authority and the establishment are particularly attractive to China’s millennials.

The CCP has determined that additional ideological support is necessary against the invasion of Western values into Chinese culture, or what Chinese leader Xi Jinping termed, “the wrong ideas.” Those would include democracy and the rule of law, as well as religious and spiritual beliefs, with Christianity, Islam, and Falun Gong at the top of the list. The CCP’s solution is to reinforce political and indoctrination and monitoring of children beginning at the earliest school age, along with teachers and university professors.

But some historical facts simply can’t be avoided, even under the powerful propaganda and censorship of the CCP. China’s millennials are quite aware of the fall of the Soviet Union and Eastern European communist political systems and the contrast with open, Western liberal societies that continue to endure. Furthermore, the existence of a free and democratic Taiwan just offshore and Hong Kong’s wealth and relative liberty on the coastal mainland continues to impact the thinking of millennials.

Stanley Rosen, a professor at the University of Southern California who studies the relationship between Chinese youth and the state, noted, “Over the past decade … many Chinese college students—perhaps even a majority of them—prefer elements of liberal democracy to China’s one-party system. I think there is a real threat.”

As millennials become more aware of the rest of the world through travel, entertainment, the internet, and social media, their views on work and life have changed. The younger generation works hard in upscale jobs to indulge in luxury items from the West as a reward for their hard work. The “996” life—working 9 a.m. to 9 p.m. six days a week—is their way out of the life their parents lived. They’re rejecting the dull factory work their parents performed and the stifling propagandistic culture of the Party. They value luxury and autonomy and look down on conformity and authority.

At the other end of the spectrum, even those who believe in the Marxist ideology are dissatisfied with the current leadership. Some of the most enthusiastic Marxist millennials regard the current party and its leadership as not being Marxist enough. The backlash includes criticism for officials’ hypocrisy on equality and sexism in the Party.

With his ascension to leader-for-life, Xi now effectively owns China. That gives him enormous power, but it’s also a double-edged sword. The old days of indoctrination of the masses through the totalitarian control of information are long gone. Whatever goes wrong in China, from a struggling economy to appalling levels of pollution to inflation and more, the blame will belong to Xi and the CCP.

For Xi, trying to control the energies, doubts, and aspirations of its younger generation may prove to be the most difficult challenges he faces. Dealing with U.S. President Donald Trump may well be the highlight of his day.