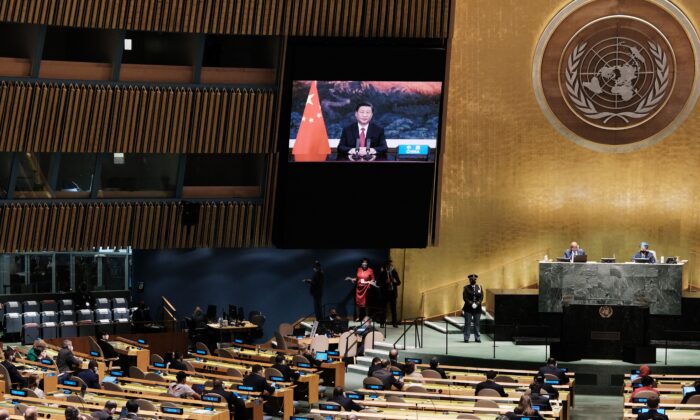 The Chinese Regime Aims to Influence and Control All Human Endeavors

Since 2013, the Chinese communists under the leadership of Xi Jinping have been diligently pursuing two strategic initiatives focused on building a worldwide colonial empire and restoring China to world leadership: the Belt and Road Initiative (BRI, also known as “One Belt, One Road”) and Made in China 2025.

In the wake of the economic devastation wrought on the world economy by the COVID-19 pandemic, Xi announced on Sept. 21 at the 76th Session of the United Nations General Assembly a third grandiose program—the so-called “Global Development Initiative (GDI)” that is intended to “steer global development toward a new stage of balanced, coordinated and inclusive growth.”

According to China Daily, Xi’s new initiative involves six areas: “prioritizing development, a people-centered approach, benefits for all, innovation-driven development, harmony between man and nature, and a commitment to results-oriented actions.” Apparently, the only standard Chinese Communist Party (CCP) propaganda phrase missing from Xi’s announcement was the euphemism “toward a shared future,” which underscores all ChiCom “altruism” that has been trumpeted in recent months by the CCP’s media.

If Xi was truly serious about GDI and his vision for the future, he would have reined in the myriad of secondary initiatives and goals that the CCP apparatchiks have been relentlessly pursuing at the world’s expense over the past several years. A number of these were previously summarized in Part 1 and Part 2 of this series.

But maybe Xi merely “forgot” to mention that GDI, BRI, and those secondary initiatives and goals are meant to result in the world bowing to CCP leadership in all spheres of human endeavors because that is the ultimate objective of the sticky Spider Dragon web of ChiCom “benevolence” being offered to the world.

This third part of the series completes the exposure of the CCP’s secondary initiatives and goals and lays bare the ChiComs’ real intentions: to control all aspects of human endeavors. The scope and diabolical synergy across those initiatives is breathtaking.

The goal is to dominate space in every way, but especially in military and economic domains. The Chinese missions to Mars and the moon are window dressing used to advertise ChiCom scientific prowess and leadership in advanced space technologies, as well as to masquerade the weaponization of space by the People’s Liberation Army (PLA), as noted here.

The ChiComs seek to achieve all of their objectives, ultimately leading to economic and military global dominance, without the need for kinetic warfare. Rather, they exploit political and psychological warfare to achieve a fait accompli in the minds of their adversaries, mainly the United States and its allies.

Oust the US From the Middle East

This objective is a “two-fer” for Beijing: destroy U.S. influence in the Middle East and gain access to massive supplies of oil and gas. Energy-poor China is investing billions under their BRI to develop the China-Pakistan Economic Corridor consisting of highways, rail lines, and pipelines from the port of Gwadar on the Indian Ocean to Xinjiang (East Turkestan). This corridor will be the transmission belt to China for Middle East oil, including oil from Iran, with whom the ChiComs have also established a strategic relationship, as noted here.

The goal here is to dramatically expand the number of qualified and experienced merchant seamen and subsidize their employment by other nations’ shipping industries in order to monitor, surveil, and influence shipping operations around the world.

The CCP objective here is to substitute China’s standards, technology, and protocols for the international conventions such as UNCLOS that presently determine conduct, responsibilities, and maritime law on the seas of the world. The effort also involves developing a network of surveillance satellites capable of monitoring sea-going traffic around the world, as well as convincing other nations to use the Beidou Navigation Satellite System in lieu of other commercial satellite navigation systems.

Collect and Exploit the World’s DNA

U.S. government advisers warned that the Chinese regime has been collecting genetic data in order to dominate global pharmaceuticals, and this effort could “potentially lead to genetically enhanced soldiers, or engineered pathogens to target the U.S. population or food supply,” according to a Reuters report.

This goal is to expand Chinese military bases throughout the region in order to counteract U.S. geopolitical dominance, as well as to place additional pressures on key U.S. allies in the region, including India, Australia, and Japan (which together with the United States comprise the Quad).

Replace US Brands With Chinese Labels

The ChiComs seek to displace U.S. brand names with Chinese labels. While this might seem to be simply standard competition, the issue is much more complex and important, as popular brands provide cultural and psychological influences that can be exploited because each one is linked with the country of origin.

Become the Dominant Producer of Industrial Goods in the World

Acknowledging the great strides made in recent decades toward this goal, Beijing’s mouthpiece People’s Daily crowed that “China is the world’s largest producer of over 220 types of industrial products.” Production leadership translates to geopolitical influence and leverage—the underlying objective.

This is a ChiCom psychological play to leverage the West’s support for democracy, but with “Chinese characteristics” controlled by the CCP. The word “whole” implies that traditional Western democracy is somehow incomplete and deficient, and that the ChiCom version is better.

Control All Data and Information

The objective here is to limit the exchange of data and information among citizens and entities to that which is approved by the state—and only the state! In other words, George Orwell’s “1984” writ large on the rest of the world but with Chinese characteristics.

Convert the South China Sea Into a ‘Chinese Lake’

Beijing’s goal is to seize control of natural resources in the area and to simultaneously intimidate China’s neighbors. Chinese efforts involve sovereignty disputes and the building of artificial islands controlled by the People’s Liberation Army.

Promote ‘Common Prosperity’ Through Total Control of the Private Sector

Common prosperity is another one of those meaningless Marxist euphemisms that sound good as they roll off the tongue but whose meaning is murky and obfuscated. The CCP has been using it to describe their domestic efforts to deliver improved living standards through the “wise leadership” of ChiCom collectivism.

Exploit the Natural Resources in the Deep Seabed

China has a stranglehold on rare earth element (REE) production and seeks to dominate new REE sources, including those in the deep seabed. Control of REE production provides considerable economic and geopolitical leverage with other industrial nations through “supply chain disruption,” particularly the REE-poor European Union nations.

This goal is about reducing U.S. competitiveness while increasing China’s competitive advantage and expanding the world’s dependency on Chinese manufacturing and production—in this case for “green products” such as solar panels, electric vehicles, and batteries. Only the Western greenies believe ChiCom propaganda that China will achieve its publicly stated goal of “net zero emissions” by 2060. The rest of us know that it’s just another feint in the CCP’s scheming to achieve world economic dominance.

Achieve Information Dominance Around the World

China has invested enormous resources to gain total information dominance in the international arena in order to improve decision-making related to the achievement of all of its goals and objectives. Information dominance involves consuming and understanding all relevant data and information in order to support decision-making. This secondary objective is highly synergistic with all of Beijing’s other secondary objectives.

Foment Discord in the US

Fomenting discord and division in the United States—China’s main rival on the world stage—has been an ongoing ChiCom objective for decades, as reported here and here. Pitting Americans against each other, exploiting economic disparities and “unfairness,” and promoting cultural Marxism throughout American society have been continuing prongs in the relentless ChiCom attack on America.

Beijing has been making strategic investments in overseas property for years for a variety of purposes, including providing security for the BRI investments, constructing bases for China’s military and navy, acquiring natural resources for future exploitation, and intimidating and pressuring other nations to accommodate Chinese interests. All of those acquisitions over time will form the core infrastructure and network for a ChiCom “colonial world empire.”

The objective is to make the Chinese economy less dependent on foreign advanced technologies and supply chains. Chinese companies would become independent of “foreign know-how” while creating domestically produced Chinese products that would be in demand around the world.

Despite all the caterwauling about “green energy,” the only real energy production technology capable of achieving the carbon dioxide reductions desired by green energy advocates is nuclear power (refer to heat exchange ratio comparisons among green energy technologies and the laws of thermodynamics, as well as the German experience with wind and solar as described here). China is moving rapidly to corner the market on exportable nuclear energy capabilities that could be feasibly budgeted by many nations.

Beijing has been successfully acquiring control of strategic commodities for years while building up strategic reserves as both an inflation hedge and also as a means of market manipulation to influence targeted countries. A strategic commodity is a raw material or agricultural product that is considered critical to a nation’s economy such that the economy would suffer significantly if that commodity’s trade and supply is interrupted in any way.

This series summarized 52 interlocking initiatives and goals being pursued by the CCP around the world. The ever-expanding Spider Dragon’s web aims to ultimately control and direct all human endeavors: economic, geopolitical, financial, legal, medical, security, travel, individual expression, culture, psychological, ideological, and much more. “Chinese benevolence” and “Chinese altruism”—as expressed by Xi Jinping and the CCP cadres—are oxymorons that camouflage their real objectives. Unbeknownst to many people, the world is meant to pay handsomely for that “benevolence” at the expense of personal and economic freedoms.