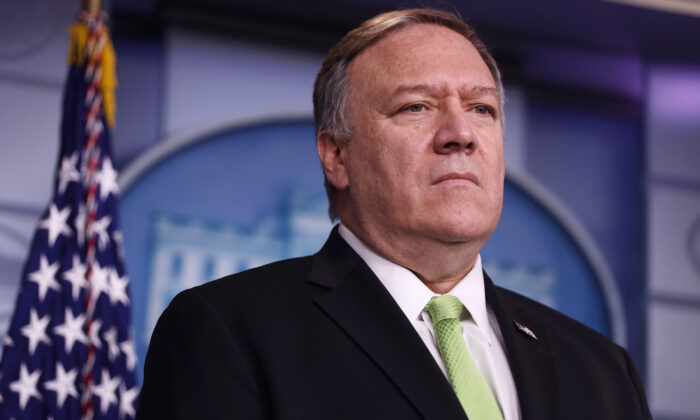 Secretary of State Mike Pompeo participates in a press briefing in the James S. Brady Press Briefing Room of the White House in Washington on Jan. 10, 2020 Alex Wong/Getty Images
Thinking About China

At the most recent National Governors Association meeting on Feb. 8, Secretary of State Mike Pompeo revealed the existence of a list created by a Chinese state-run think tank. The list is of all 50 U.S. governors, and it categorizes each one by their attitudes toward China as friendly, hardline, or ambiguous.

This revelation was, according to Pompeo, provoked when he received an invitation from a former governor to attend a state-level event that promised economic opportunities with China. He added that the event was run by the Chinese People’s Association for Friendship with Foreign Countries (CPAFFC), which is the public face of the Chinese Communist Party’s (CCP) official foreign influence agency, the United Front Work Department.

The intelligence program targeting the governors and state-level government officials is publicly called sub-national cooperation by the Chinese. This should not really be much of a surprise to anyone.

The president of CPAFFC, Li Xiaolin, stated at a 2017 meeting with Iowa’s governor that “sub-national exchanges and cooperation has become one of the major driving forces of China–U.S. relations,” according to the group’s website.

Pompeo questioned how many of the governors understood that this group was a communist front group and not any sort of private organization interested only in economic development. According to press reporting, some in the audience were surprised.

It’s deeply disappointing to see that our country’s governors don’t seem to receive even the most basic of counter-intelligence briefing or training and are so ill-prepared that they’re surprised to learn they’re targeted by an enemy power. The immediate question should be, where did the CCP get the information that allowed them to categorize each governor as friendly, hardline, or ambiguous? They had information on all 50.

With Chinese state intelligence making this great of an effort to manipulate and recruit at the state level in the United States, it should be obvious that an even more robust effort is made to target the U.S. House of Representatives and the Senate, particularly key personnel.

You can safely bet that each senator and congressman is similarly rated by the CCP and likely their senior staff as well. Again, the immediate question should be, where did the CCP get the information that allows them to categorize everyone?

In this case, let me remind readers that in 2018, we learned that Sen. Dianne Feinstein (D-Calif.) had a Chinese spy on her staff for about 20 years. Feinstein fired the spy once he was discovered, and her only substantive comment was that the individual was in California and had no access to classified information in Washington. No investigation has been done as of yet to measure the damage done to U.S. interests by that individual.

Let me point out now some of the things he almost certainly did for Chinese state intelligence. He was perfectly positioned to report on many state-level officials, including the governor of California and many others. He was perfectly positioned to report on Feinstein and her attitudes toward China and that of her entire staff and likely other senators and their staffs, as well as California’s congressmen.

Also, it’s quite common for a senator to draw from their home state for staffers who eventually move out to Washington to work. This spy would have been perfectly positioned to guide other individuals working for the CCP into those empty slots and onward to Washington. Not that many years ago, the FBI would have been all over this and investigated every aspect to dig out any harm done to U.S. interests and to find any other potential spies. In this day and age, not so much.

Does anyone doubt the CCP have a list of important media figures and a check mark next to their attitudes toward China?

Worth noting is that Feinstein would clearly fall into the “friendly” category. She’s one of the strongest supporters in Congress for closer U.S. relations with China and has fought for permanent most-favored-nation trading status for Beijing. She has an estimated net worth of around $94 million, most of which was made by her husband, Richard Blum. There’s extensive and detailed media reporting that a large portion of their personal wealth comes from doing business with China.

In fairness, Feinstein has always maintained that there’s a solid “firewall” between her duties as a senator and her husband’s business dealings. On the other hand, she also claimed the Chinese spy on her staff for 20 years didn’t have access to anything of interest.

The CCP has an aggressive worldwide intelligence program to both influence and to steal information of value. It has an aggressive military program, even building islands and militarizing them in the South China Sea in areas outside of Chinese waters. It has been stealing us blind in trade deals and business practices for years. It fully intends to conquer and subdue Hong Kong and Taiwan. It will lie, cheat, and steal to get what it wants.

Very simply, China is the greatest long-term threat to U.S. national security, and this fact needs to be recognized and acted upon.