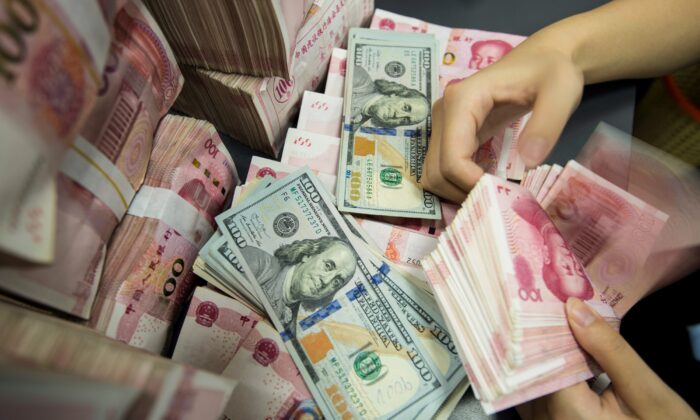 The Chinese CNY Is Far From Achieving Internationalization

The Chinese Yuan’s (Renminbi, CNY) recent depreciation aroused concerns. It had been steady before the summer but all of a sudden it depreciated by a few thousand points against the U.S. Ddollar (US$). In the past five months, it went from an exchange rate of 6.37 to 7.00, a depreciation of exactly 10 percent.

When the CNY just began to decline, the USD index (DXY) stood at 101; now is 110, or a nine percent appreciation during the same period. Although the CNY depreciated in a stepwise manner while DXY appreciated gradually, the ultimate total percentage changes are basically comparable.

Since the CNY has been falling at a similar speed to other non-USD currencies, the impression of the “CNY crisis” has obviously been exaggerated, especially by the mass media. From a policy perspective, exchange rate movements of such an order of magnitude as 10 percent within two quarters are regarded as not small, but also not too rare.

Since the collapse of the Bretton Woods system when most currencies started to float, the U.S. Dollar has experienced a few secular bulls where each round lasted for five to six years, and for each year it surged on average by five to six percent.

However, the actual U.S. Dollar appreciation has never happened in a linear manner throughout; instead, the chart pattern is choppy and a speed surge of 10 percent in two quarters is not too rare. With the CNY exchange rate moving in tandem with that of its neighbours it cannot be said to be due to strong policy decisions. And as experience shows, without large changes of say one-thirds within a short period of time (such as within a few months), the real effect is indeed not obvious. Moreover, if most other non-U.S. Dollar currencies are doing the same, such effect will be offset.

From the nominal effective exchange rate perspective (a weighted exchange rate against a basket of other currencies), which could be compiled by the Bank for International Settlements (BIS) or International Monetary Fund (IMF), or any other banks, the CNY has exhibited a flat trend over the past three quarters. That says, CNY is stable against a basket of currencies but only depreciated against the U.S. Dollar. So cyclically speaking, there is no evidence that the Chinese authority is employing exchange rate tools to manage the real economy. However, they might fear capital outflow.

Yet from a longer-term perspective, exchange rate strength should reflect the health of a country. The functions of a currency are mainly seen in its current transactions or its store of value for the future. On the latter, CNY has seen some improvement from 1.08 percent firstly reported in 2017 to the latest of 2.88 percent in 2022 Q1. However, this is only half of that of the Pound Sterling or the Japanese Yen (the fourth and third largest currencies respectively) as both improved by 5 percent, the Euro (the second largest) achieved 20 percent, and U.S. Dollar achieved 59 percent. The CNY share is just higher than that of the Canadian dollar.

Thus, CNY’s international function is seen mainly in transactions. As the accompanying chart shows, however, the CNY’s SWIFT payments share has been flat at two percent over the past eight years. As an international currency, the CNY has a long way to go.