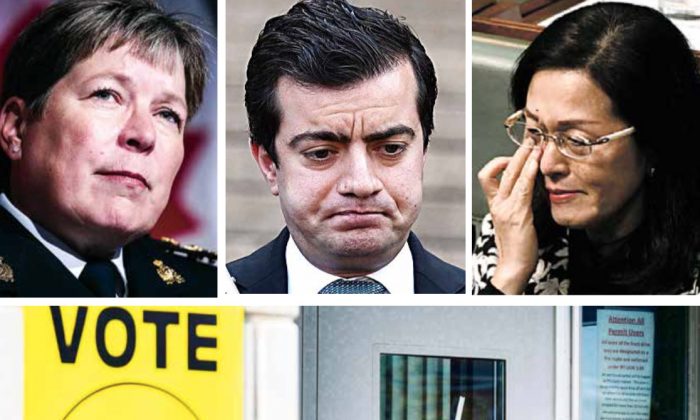 The Burgeoning Threat of Foreign Interference

Australia undermined but Canada could face worse due to political infiltration, warns expert
By Omid Ghoreishi

For a time, the once up-and-coming Australian politician Sam Dastyari became the poster boy for everything wrong with his country’s lax attitude in the face of ever-deepening foreign interference risks.

The Labor Party senator resigned from his post in 2017 following several scandals involving his links to a Chinese billionaire with ties to the Chinese Communist Party (CCP) who once paid a legal bill for him. In 2016, against the position of his own party, Dastyari spoke favourably of Beijing’s aggressive moves in the South China Sea.

Now, in light of another Australian politician coming under scrutiny for her links to China, Dastyari is offering reflections on his own path to disgrace.

“You may be thinking that you’re the one using them, but in the end they’re the ones using you,” he told the Sun-Herald and the Sunday Age.

Both Dastyari and Liu were great fundraisers for their parties. In his interview, Dastyari said he learned that rich donors, who with every donated dollar help raise the politician’s profile in his or her party, have an agenda of their own.

According to ABC, Liu was the president of a branch of the Liberal Party that pushed for easier foreign investment laws in agribusiness and agricultural land in Australia in 2017. There have long been security concerns in Australia about Chinese state-owned enterprises and Chinese companies linked to the CCP buying up farmland and taking over companies.

While there are increasing calls for Liu to step down, the Liberal/National coalition government is implying that she is being targeted unfairly because of her Chinese heritage.

A similar argument was used by Chinese-born New Zealand MP Jian Yang, a National party MP who, according to the Financial Times, is also a big fundraiser for his party. After it was revealed in 2017 that he formerly taught at Chinese military academies that train spies, he said he had been the target of a racist smear campaign.

Several people, among them Dastyari and Australian political commentator Andrew Bolt, have scoffed at resorting to race to defend Liu, with Dastyari saying it worries him when race is used “as a shield from legitimate questions.”

‘Most Advanced in Canada’

According to Australian author and ethics professor Clive Hamilton, the CCP began its policy of pursuing ethnic Chinese participating in politics overseas in 2005.

This strategy, Hamilton adds, “is most advanced in Canada.”

CBC reported this week that Canada’s intelligence agencies are concerned about the threat of China and India using the diaspora communities to influence the upcoming federal election. Citing anonymous sources, the report said one of the ways foreign powers try to achieve this is by attending nomination meetings and helping select candidates who are favourable to them.

The report adds that Beijing pushes Canada’s Chinese community to write China-friendly letters to the editor and start pro-Tibet and pro-Taiwan student associations on Canadian campuses.

One of the highest-profile instances of Canada’s intelligence agencies warning about foreign influence was in 2010, when then-head of the Canadian Security Intelligence Agency Richard Fadden said a number of municipal and provincial politicians, among them two provincial ministers, were under the influence of foreign powers.

The Globe and Mail later revealed that one of the ministers Fadden was referring to was Michael Chan, a former high-profile minister in Ontario.

Chan had been a major fundraiser for the Ontario Liberal Party, according to the Globe. Most recently, he has been speaking against the Hong Kong demonstrations and attended a rally organized by pro-Beijing groups in Toronto to condemn the protests on Aug. 11.

Among several such groups attending the same rally was the “Tibetan Association of Canada,” which has been denounced by Tibetan organizations in Canada that say it doesn’t represent them but is supported by the CCP. The group has been mired in controversy since its inception, with the Prime Minister’s Office confirming that a letter of support issued for it in the name of Prime Minister Justin Trudeau is fake.

The group’s inauguration event in Toronto on April 20 was attended by Toronto city councillor Jim Karygiannis and Ontario Progressive Conservative MPP Vincent Ke, a heavy fundraiser for his party according to the National Post.

China is the one constant that comes up in various reports whenever there is talk of foreign interference risks to Canada.

In its annual report on national security released in April, the National Security and Intelligence Committee of Parliamentarians named China and Russia among a “handful of states” conducting espionage and foreign influence activities in Canada.

The recent arrest of senior RCMP intelligence official Cameron Ortis has shed more light on the risk Canada faces when it comes to hostile powers active in espionage, whose aim is subversion of Canada’s interests. Ortis is being accused of preparing to share classified information with a foreign entity. According to a CBC report citing a government source, Canadian officials are particularly worried because Ortis was known as “the China expert.”

As a G7 country and a member of a number of key strategic alliances, Canada is a prime target of espionage and influence activities by foreign powers, particularly China, according to Shuvaloy Majumdar, a Munk senior fellow with the Macdonald-Laurier Institute.

“Canada is of increasing interest to foreign agents who would like to either steal our technology or subvert our democratic society,” he said. “Whether it is Russian disinformation, or Chinese, Iranian, and Pakistani efforts to try and change how Canadians interact with our democracy, the threat of foreign interference to Canadian democracy is very real.”

The “disturbing reports about Chinese influence” in Australia, as described by Prime Minister Malcolm Turnbull in 2017, led to his country adopting new anti-foreign interference laws that came into effect this year. Among the provisions is a requirement for those acting on behalf of foreign entities to register with the government.

The new legislation resulted in former high-profile politicians, among them former cabinet ministers and a premier, resigning from their posts with organizations that have strong links to the CCP, prior to the laws coming into effect.

There has also been increased focus on and even some closures of China’s Confucius Institutes in the country. This comes as the regime’s footprint can be increasingly observed as pro-Beijing groups clash violently on Australian campuses with those supporting the pro-democracy protests in Hong Kong.

“I think we can stand to inherit the best practices of all kinds of democracies, not only what the Australians are doing with their foreign interference laws, but also how democracies like Taiwan and Estonia—all who, from their neighbours or countries across shores, have to deal with very difficult existential risks—preserve their democratic society and their sovereignty,” Majumdar noted.

“All offer lessons on how Canada could create its own response.”