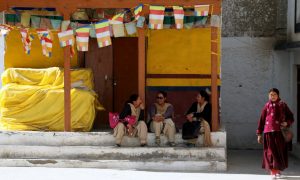 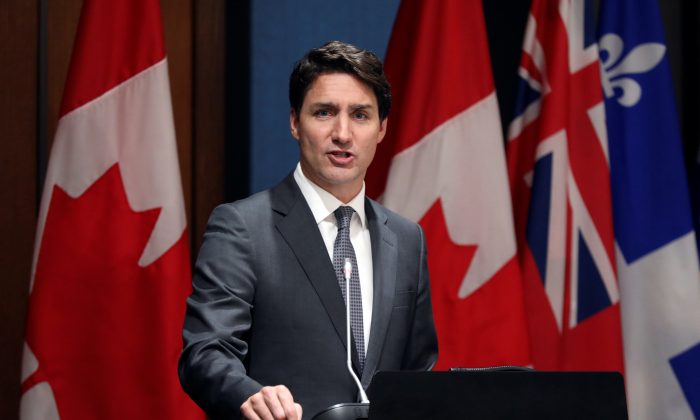 Prime Minister Justin Trudeau speaks during a meeting on Parliament Hill on April 2. The Prime Minister's Office confirmed on April 24 that a letter supposedly written by Trudeau in support of a new pro-China Tibet group is fake. (Reuters/Chris Wattie)
Canada

The Prime Minister’s Office has confirmed that a letter supposedly from Prime Minister Justin Trudeau supporting a new group that promotes Tibet’s reunification with China is fake.

The letter was reportedly circulated on social media before the inauguration of the Tibetan Association of Canada in Toronto on April 20.

“A letter of greeting was not sent by the Prime Minister to the Tibetan Association of Canada. Our office is looking into this matter further,” said Matt Pascuzzo, press secretary for the Prime Minister’s Office. No further details were provided.

A Chinese-language news site that covered the event claims that both Prime Minister Trudeau and Immigration Minister Ahmed Hussen sent congratulatory letters to the new association.

A spokesperson from Hussen’s office said they have not located any correspondence with the Tibetan Association of Canada and are also looking into the matter.

Toronto city councillor Jim Karygiannis and Ontario PC Provincial Parliament member Vincent Ke attended the event, as well as the honorary chairman and a number of vice presidents of the Confederation of Toronto Chinese Canadian Organizations (CTCCO), which has close ties to the Toronto Chinese consulate.

Dorjee Tenzin, the president of the newly formed Tibetan Association of Canada, said at the event that Tibet is part of China, and his group is firmly opposed to Tibetan independence and instead supports the reunification of China, according to the Chinese report.

The report also describes the Chinese regime as supportive of the Tibetan people and freedom of religious belief, despite the opposite being the case.

The creation of the association has Canadian Tibetan groups concerned. A joint statement from five Tibetan organizations in Canada objects to its creation, saying they’re appalled that the fake letter was used to mislead Canadians. They say the new association does not represent the views of many Tibetan-Canadians.

“Even more troubling are the claims made by the president of the new group stating that Tibet now enjoys freedom of religion, economic development, ecological and environmental preservation, and improvement of Tibetans’ livelihood.”

A Toronto-based Chinese website, 51.CA, reported that the CTCCO “contributed to the establishment of the Tibetan Association of Canada.”

On April 18, two days before the inauguration of the new association, the CTCCO held a press conference at its headquarters in Toronto where its president, Guoning Weng, announced that the Tibetan Association of Canada had officially joined the CTCCO.

As reported previously by The Epoch Times, a post about the CTCCO on the Chinese regime’s websites states: “Whenever there is something against China’s interests, CTCCO will organize parades to protest or use media to protect the image of China … such as [the time] they protested the mayor of Saint John who raised the Tibetan separatists flag at City Hall on the day when Premier Zhu Rong Ji arrived.”

The Canada Tibet Committee, an organization that promotes human rights and freedoms of the Tibetan people, is calling for a criminal investigation of the new association.

“We are shocked at the extent this Chinese government-backed group went to deceive Canadians that they represent Tibetans in Canada,” executive director Sherap Therchin said in an emailed statement.

“We call for a criminal investigation of this association and appropriate actions be taken. And for all their claims of development in Tibet, let’s start with opening of Tibet for international media, independent researchers and human rights experts.”

Freedom House, a human-rights advocacy group mentioned in the statement, regularly ranks Tibet as the second least free region in the world, giving it a score of 1/100, or “not free.”

“Residents of both Chinese and Tibetan ethnicity are denied fundamental rights, but the authorities are especially rigorous in suppressing any signs of dissent among Tibetans, including manifestations of uniquely Tibetan religious belief and cultural identity,” the Freedom House website states.

There have been reports of mass arrests in and around the Tibet Autonomous Region, with calls from United Nations human rights experts to allow access for independent observers and journalists over concerns of “reports of security forces firing on protestors and alleged killings.”