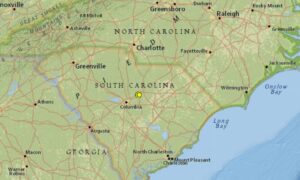 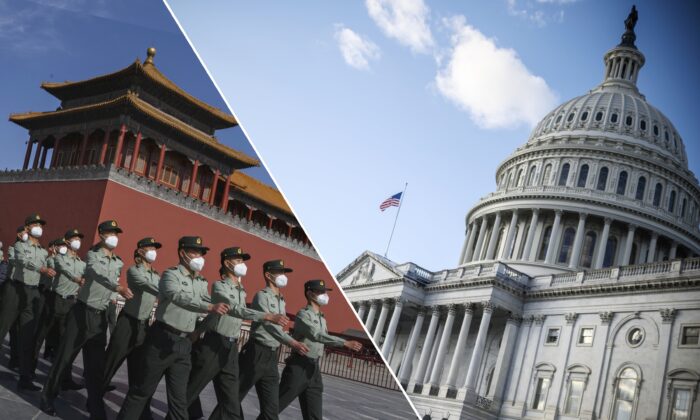 (L) Soldiers of the People's Liberation Army's Honor Guard Battalion march outside the Forbidden City, near Tiananmen Square, in Beijing on May 20, 2020. (R) The U.S. Capitol building is seen on a cold and sunny winter day in Washington on Dec. 29, 2020. (Kevin Frayer/Getty Images, Eric Baradat/AFP via Getty Images)
Thinking About China

Nearly 18 months into the Biden administration, the White House still has no China policy. Furthermore, U.S. Secretary of State Antony Blinken’s China policy speech was postponed because of COVID-19.

Meanwhile, the Chinese Communist Party (CCP) has a U.S. policy and is moving on it.

On May 5, Blinken was scheduled to deliver a speech outlining U.S. policy on China. The event was significant because, after nearly a year and a half in office, the Biden administration still lacks a codified China policy.

In February, the administration released its Indo-Pacific strategy, with prominent mentions regarding China. It primarily focused on defending the Indo-Pacific region from the CCP. Conversely, President Joe Biden’s China-specific policy has been piecemeal, and the war in Ukraine has distracted the White House from focusing on China.

The defense pact signed between the Solomon Islands and China in April could be seen as a failure of Biden’s Indo-Pacific strategy. Now, U.S. and Australian diplomats are both in contact with the leaders of the Solomon Islands in an attempt to minimize the damage. A solid China policy could help prevent this type of slip-up in the future.

While the administration has several components of a strategy, there’s no cohesion. Biden is poised to host ASEAN leaders at the White House on May 12–13. He’s also scheduled to visit Japan and Korea between May 20 and May 24. Additionally, the United States will be attending the 19th IISS Shangri-La Dialogue: Asia Security Summit on June 10–12, which hasn’t taken place since 2019 because of the COVID-19 pandemic. This will be the first in-person meeting between U.S. Secretary of Defense Lloyd Austin and his Chinese counterpart, Wei Fenghe.

While the United States cobbles a China strategy together from a series of meetings and speeches, the CCP has a clear plan in place that it’s advancing. The Solomon Islands pact will now give the People’s Liberation Army (PLA) Navy a foothold in the Asia Pacific.

The Brookings Institute wrote in a May 6 article that the CCP’s Solomon Islands play could be just the first in a series of security pacts, creating alliances and propping up armies. This would be consistent with Beijing’s policy of building a “community of common destiny,” which involves forging alliances while tearing allies away from the United States. It also works with “the great rejuvenation of the Chinese nation” that seeks to displace the United States as the world’s most influential country, particularly in the Indo-Pacific region.

The CCP’s initiatives are highly targeted and aimed at the United States. A 2021 U.S. State Department report on the development of the Chinese military identified China as “the only competitor capable of combining its economic, diplomatic, military, and technological power to mount a sustained challenge to a stable and open international system.”

At the 19th Party Congress in 2017, Chinese leader Xi Jinping announced his plan to complete the modernization of the PLA by 2035 and to transform it into a “world-class” military by 2049. Milestones have been set and are being achieved step-by-step in the completion of this goal.

According to a recent U.S. Congressional Research Service publication, the PLA Navy is expected to expand to 420 ships by 2025 and to have 460 ships by 2030. The CCP expects to integrate artificial intelligence and emerging technologies into the PLA by 2027, networking China’s military into a “system of systems for ‘intelligentized’ warfare.”

The CCP’s military modernization synergizes with its economic plans, which fuel technological advancement. Increasingly, Beijing is combining its money with its military to achieve political goals, supporting the CCP’s strategy to reshape the international environment to better suit the regime.

Unlike the fractured approach of the Biden administration, the CCP has organized “military-civil fusion” by combining the capital of Chinese companies with the research capabilities of public universities. This, in turn, reinforces the CCP initiatives of “Made in China 2025” and “China Standards 2035,” both of which set the dates that China intends to achieve specific levels of technological advancement and independence.

Xi’s economic plan of “dual circulation” helps to bankroll the CCP’s military strategy and prepare the country in case of war. By depending more on domestic consumption and less on international trade, China can isolate itself from international sanctions and ensure that it can maintain its economy in the event of a military conflict.

Blinken is expected to give his China speech as soon as he’s medically cleared. It’s unlikely, however, that the new U.S.–China policy will be nearly as comprehensive as the CCP’s U.S. policy.