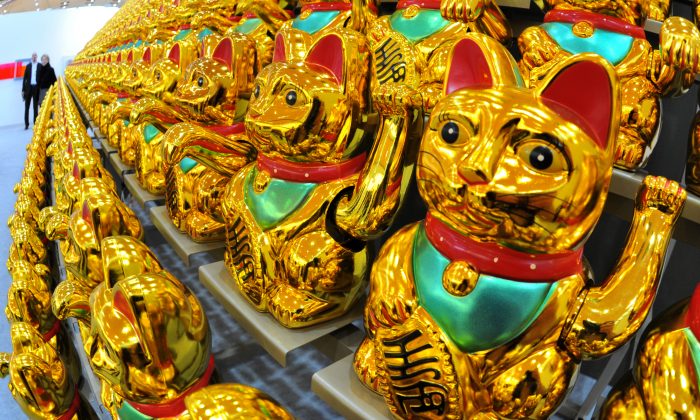 The artwork "The Global Pursuit of Happiness, or: The Army of Luck" by artist Boris Petrovsky is displayed at an art fair in Karlsruhe, western Germany, on March 7, 2012. (Uli Deck/AFP/Getty Images)
Opinion

The Best Measure of Social Well-Being: The Discounted GDP

GDP, the World War II-era relic, has reached its retirement age. The fundamental flaw of this measurement is that it ignores the purpose of products and services in any economy: the feelings of people. It lacks the human touch. This detachment was acceptable and necessary during periods of war, but the human touch is essential in times of peace to measure the progress of any society.

In almost every country around the world, it seems the whole of society is calibrated according to addiction to GDP growth. But politicians and businessmen forget that the reason we work so hard to achieve economic growth is to use the output to live a better life: If economic growth does not make people happy, it is counterproductive to society as a whole.

In the United States, much of the GDP growth comes from the extra hours Americans spend on working, like the 100-hour week on Wall Street, which gave financial wizards enough time to design and sell mortgage-backed-securities. The result was a disaster to society.

In the peak years of apartheid in South Africa, from 1932 to 1972, GDP growth was among the highest in world history, even higher than China’s from 1978 to 2008. Does it follow that all the developing countries around the world should now follow the path of apartheid?

Right now the environment is in a dire state in Beijing. If you were to conduct a poll of residents and ask if they are willing to sacrifice a setback of 20 percent of GDP per capita in exchange for clean air, safe water and food, and an efficient public transit system (like Hong Kong’s or Singapore’s), my guess is that at least 80 percent of Beijing residents would vote “Yes.”

GDP growth is such a lousy measure of social well-being that it should be replaced as soon as possible.

Many measures have been invented to measure the well-being of a society, including the Human Development Index (HDI), used by the U.N.’s Development Program, and the Happy Planet Index (HPI), which combines economic metrics with indicators of well-being, including subjective measures of life satisfaction, which have become quite sophisticated (HPI uses data from Gallup, World Values Survey, and Ecological Footprint). The HPI assesses social and economic well-being in the context of resources used, looking at the degree of human happiness generated per environmental units consumed.

Since products and services are created to give people a better quality of life, the degree of satisfaction of citizens must be incorporated into any index to measure the status of a society. This satisfaction index is very easy to get and the data is extremely reliable. It is calculated by taking the number of people satisfied divided by the total number polled. For example, if among 100,000 people surveyed, 80,000 were either satisfied or very satisfied with their way of life that would yield a satisfaction index of 80 percent. This bundled index includes opinions people have about the environment, political establishment, sustainability, income inequality, opportunity in society, and so on.

So a better measure of the status of any society is to incorporate the personal feelings of citizens into the old GDP measurement: the discounted GDP, or DGDP. It is GDP x (satisfaction index).

The GDP measurement for the past 70 years has played a pivotal role in creating many mean-spirited people whose only motivation is money, which ultimately has harmed the fabric of our society.