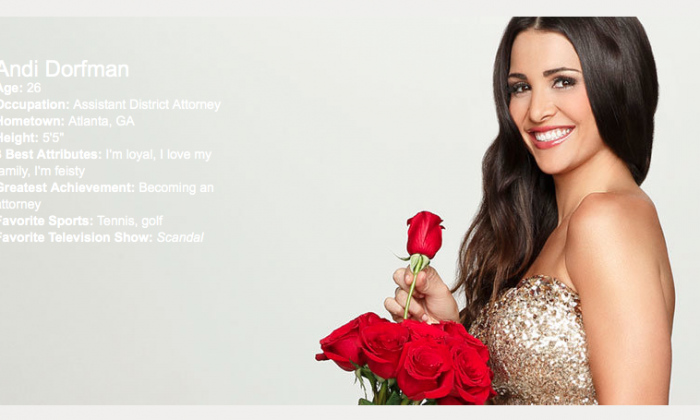 A screenshot of The Bachelorette 2014 profile page for Andi Dorfman. (ABC)
Entertainment

“The Bachelorette” main star Andi Dorfman might have seemingly admitted that she handled the Eric Hill situation a bit better.

On her Twitter, Dorfman posted an image that reads, “I Fall, I Rise, I Make Mistakes…I Learn…I’m Human, I’m Not Perfect But I’m Thankful.”

Dorfman has received flak for ending Hill home on Episode 4 of the show’s Season 10, which aired this week.

According to Cosmopolitan magazine, the show “awkwardly” dealt with Hill’s death. Hill died in a paragliding accident after he shot the show.

“The producers tried to contain those elements to the end, but the resulting scenes were ridiculous, like a funeral staged by middle school students. Also, the entire episode took place around a Connecticut casino called Mohegan Sun,” the publication writes.

It adds: “I think the producers had a tough call here, and they handled the situation with some dignity. But a disastrous lack of self-awareness is what this franchise is all about. The Bachelorette may claim to be all about love and connection, but the show is hopelessly adrift when confronted with a real event. In what universe would someone’s death be reduced to a no-show at ‘Men Tell All’? We just found out.

But Eric Hill’s sister, Karen Tracy, said that seeing him on the show “makes [her] smile.”

“People ask if it’s difficult to watch him on the show, and I do get a little nervous until I see the handsome brother that I know and love,” she told Hollywood Life. “I get a little tearful, but I know Eric would want his audience to enjoy the journey with him, and seeing him makes me smile.”