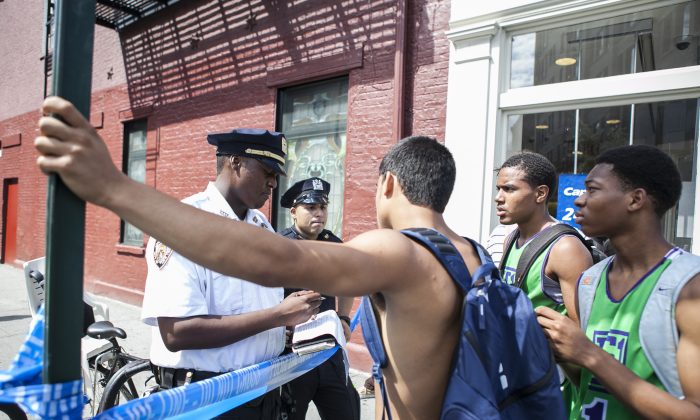 The Art of Policing

WASHINGTON—The use of stop-and-frisk and heavy police presence in high crime areas can reduce crime, but these practices are also known to produce negative effects in the community at large. Where stop-and-frisk by police is most intense, the reaction of pedestrians is often one of resentment and feeling it is unfair.

We saw this issue manifest in the protests, public debate, and lawsuits in New York City, which eventually had to terminate its aggressive stop-and-frisk policy.

The Urban Institute on Oct. 15 held a discussion on this policy from a panel of three experts on policing, each with an impressive number of years of personal experience. One panelist was a current police chief, another panelist was a former police chief, and the third was a 25-year police veteran. The panel looked at how police actions can control crime and ensure public safety while simultaneously earning the respect and trust of the community.

The panel also commented on the publication of a “guide” to law enforcement, “Stop-and-Frisk: Balancing Crime Control with Community Relations.” It was written by the Urban Institute and released online the same day as the panel discussion by the Office of Community Oriented Policing Services, in the Department of Justice, which provided the grant for it.

The guide defines stop-and-frisk as police officers routinely and intensively using “stops and subsequent frisks and searches as part of everyday policy.”

At one level, no one can object to a police officer stopping a pedestrian briefly if the officer reasonably suspects that the person is engaged in criminal activity, said Ronald L. Davis, director of the Office of Community Oriented Policing Services at the U.S. Department of Justice.

Dr. Davis was police chief of East Palo Alto, Calif., which was once called the murder capital of the United States. Over a six-year period crime decreased more than 20 percent overall during his time as chief.

Further, if the officer has a reasonable suspicion that the stopped individual is armed, the officer may also conduct a limited pat-down search (“frisk”) in order to protect the officer’s safety or the safety of the public, said Davis.

The quick frisk for weapons is not a “search,” which is more invasive. The guide states, “To conduct a full search of an individual’s person and/or property, officers must act on probable cause, a search warrant, or consent from that individual.”

Davis asked, “[Just because] I can [legally] stop someone and frisk, should I?”

He said that trust and confidence are vital to ensuring public safety, but that trust can be undermined by programs like stop-and-frisk.

“If you engage in activities that compromise trust, then you lose a lot of legitimacy,” he said.

Davis wrote a letter to his police colleagues to accompany the guide. He wrote, “We know public safety is measured not simply by the absence of crime but also by the presence of fairness and justice.”

Dr. Tracie L. Keesee, cofounder and director of outreach, Center for Policing Equity, University of California Los Angeles, said, “Stop-and-frisk opens the doors to a larger conversation on how to police.”

“When you use stop-and-frisk as a tactic, you have a problem,” said Cathy L. Lanier, who has been chief of police of the District of Columbia since 2007.

The broken window theory posits that as soon as there is a sign of disorder, such as a broken window, or disrespect for the law, such as some minor infraction, police need to be alert and show zero tolerance. While the broken window or the graffiti may seem inconsequential, the theory is that it invites more disorder. If the community stands aloof and the police ignore it, crime will escalate.

CompStat is a crime-tracking approach that groups crimes into categories, compiles the frequencies, and maps the crime events for a given period of time. By mapping the data counts and percent changes over the previous week, month, and year one can readily see trends and “hot spots” in the city where crime is highest.

As an organizational management tool, it can be used to hold police chiefs, precinct captains, and other law enforcement officials, accountable for crime reduction or lack thereof. CompStat was introduced to New York Police Commissioner William Bratton in 1994. Crime was said to be noticeably reduced. Soon similar types of management tools for crime control were implemented across the U.S.

But stop-and-frisk “as a tactic” and “hot spot” policing did not sit well with the D.C. police chief.

Lanier said the broken window theory and policing by numbers were good academic work, but have been misapplied. “Where you only have numbers to measure performance, you’re going to have cheating,” she said.

Lanier said that if a police department “pushes” numbers and zero-tolerance theories to the exclusion of anything else, then stop-and-frisk becomes a tactic, and “we miss the point.”

“The zero-tolerance-at-hot-spots policy is a bad thing. It alienates the people you need the most,” she said.

Lanier gave the hypothetical example of detaining a driver who ran through a red light and had an expired driver’s license. Or a 55-year-old lady drinking a beer on her porch, which is a violation of the drinking in public ordinance. But Lanier said you are then arresting “largely law-abiding citizens.”

“And guess what happens to the neighborhood? They are inundated with carjackings … and robberies.”

“[The zero-tolerance] strategy may have worked in downtown New York with disorderly appearance and conduct, where the residents aren’t raising children,” but it won’t work in D.C. neighborhoods, she said.

Lanier said she had done a study before she was police chief that measured the crime reductions when relatively large numbers of police were made highly visible and flooded the “hot spots.” It had a “dramatic effect on [reducing] property crime—burglaries, stolen bikes—but violent crime did not go down,” she said.

The panelists stressed the importance of the police fitting in with the community. Lanier said, “Really, the community sets the standards for what is allowed or not, and that includes us.”

Davis said that citizens want the police presence for their safety, but they don’t want police conduct that makes them feel oppressed. He asserted that when communities are told that they have to choose one or the other, it is a “false choice.”

Lanier said that they are revamping their recruitment process. One of the things D.C. is evaluating is empathy. She sends new recruits during the 18-month probationary period to neighborhoods to knock on doors. She said, if recruits are not comfortable speaking to the community, they may have to be told, “This is not the right job for you.”

Keesee, a police specialist, said that stop-and-frisk is too narrow of an approach and ignores “the underlying problem of what is happening in communities of color.”

“So what is happening in the name of public safety is contributing to the deterioration of the community itself.”

It’s similar policies and lack of attention to the wider community problems that don’t allow “a community to move forward,” she said. We say we learn lessons, “yet here were are today.”