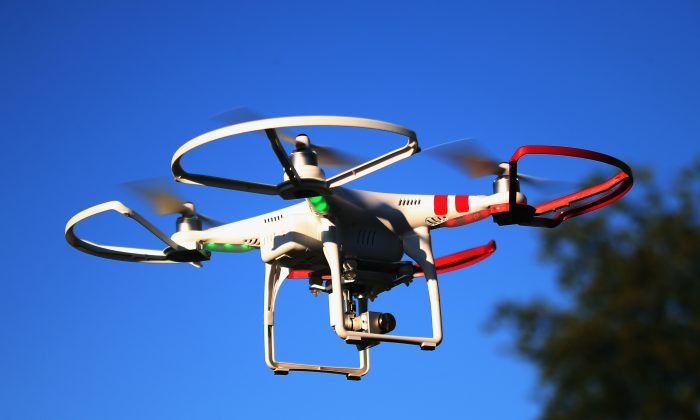 A drone is flown for recreational purposes in the sky above Old Bethpage, New York, on Sept. 5, 2015. (Bruce Bennett/Getty Images)
Opinion

Just because you may not have seen a drone overhead doesn’t mean it hasn’t seen you. And, as was demonstrated by the killing of two British jihadi in Syria recently, these unmanned aerial vehicles are increasingly deployed by the West as front-line weapons of war.

Drones are set to become a defining feature of this century. Thousands are already in operation in most developed countries worldwide—and that is likely to grow to hundreds of thousands as drones of different shapes and sizes are deployed by the media, emergency services, scientists, farmers, sports enthusiasts, hobbyists, photographers, the armed forces, and government agencies.

Eventually commercial uses will dwarf all others. Amazon promises to deliver purchases within 30 minutes via delivery drones. Domino’s Pizza has staged hot pizza drone delivery. More than 20 industries are approved to fly commercial drones in the United States alone, and developing countries are following suit.

The question is, is this boom in drones moving faster than the law? How to fit such a proliferation of drones into the current regulations? The answers will need to be written into national and international laws quickly in order to govern an increasingly busy airspace. Many existing laws may need to be tweaked, including those governing cybersecurity, stalking, privacy and human rights legislation, insurance, contract and commercial law, even the laws of war.

There have after all been numerous suspect or dangerous uses of drones already. For example, illegal flights over seven nuclear plants across France, disruption to U.S. forest firefighting, and seven near-misses at airports in the U.K. In the United States several landowners have shot them down, leading to court cases that pit claims of trespass and the right to privacy against criminal damage.

French legislators responded swiftly with a police order to the first balloon flights by the Montgolfier Brothers in 1784 by prohibiting all flights over Paris without prior authorization. In the same way sovereign states ought to define precisely how and when they will permit drone flights over their territories. So far legal development to govern drone use has been very piecemeal; most countries have done nothing yet.

Again, it was France that was first to introduce dedicated legislation governing drones through a decree in 2012 bringing drones within its civil aviation regulations. Drones are allowed to fly between 50–150 meters (164–492 feet) from the ground and there are penalties up to five years in prison and fines of 75,000 euros for unlawful use of a drone.

Also in 2012, the U.S. Congress passed the Federal Aviation Authority (FAA) Modernization and Reform Act, which required the integration of civil drones into national airspace by the end of September 2015.

However, the U.K. has struggled with fitting drones into its legal framework as neither the Civil Aviation Act nor the Air Navigation Order provide a good fit. The Department for Transport recently announced plans to introduce fines of up to 2,500 British pound for flying drones in built-up areas. Some clarity is provided by the CAA’s Unmanned Aircraft System Operations in U.K. Airspace Guidance, which requires drone pilots to maintain direct line of sight with drones and limits their altitude to a maximum 394 feet (120 meters). Small drones must avoid and give way to manned aircraft at all times.

Flying in the Face of the Law

The International Civil Aviation Organisation (ICAO) plans to introduce policies to regulate civilian drone flight by 2028 worldwide. The EU and the United States have signed a formal agreement to cooperate on integrating drones into civil air traffic management. But consensus is notoriously difficult in international regulation—it could take decades to achieve a global agreement.

The last international civil air treaty of note is the 1944 Chicago convention. This impressive treaty created the standards for the common use of airspace between nations. For example, that every nation has sovereignty over its airspace and that no aircraft operated by the state (such as military or police) will fly over other states without authorization. It also required nations air regulations to be obeyed and required aircraft to be registered and display their registration marks.

For drones, however, it’s not clear what types and sizes of drones are required to be registered and display their nationality. There are drones the size of small birds or even coins that can fly across national borders in near-invisibility, upsetting these egalitarian rules. It’s vital these issues are comprehensively dealt with quickly in a new treaty, in the same spirit of egalitarianism as at Chicago in 1944.

For many, drones are typified by their use for military operations in Afghanistan and Iraq. The United States is reported to have up to 7,000 drones in Afghanistan, with the main source of funding for developing modern drone technology coming from the military.

Successive U.S. governments’ policies of conducting drone assassinations will perhaps go down as one of the most egregious use of air power in human history, with thousands of lives lost in an amorphous conflict against vaguely defined al-Qaeda and ISIS “affiliates.” The only legitimization in most cases appears to be White House’s early morning bureaucratic meetings.

The American Civil Liberties Union has correctly addressed this, stating: “The targeted killing program itself is not just unlawful but dangerous … it is dangerous to characterize the entire planet as a battlefield.” A recent RAF strike was the first targeted U.K. drone attack on a British citizen. However, U.K. armed Reaper drones have accounted for up to a third of the 100 airstrikes in Iraq alone as of January 2015.

Lethal drone technology is going to be available to nearly all countries in a very short time. The possibility that even a few dozen states might follow the path beaten by the United States is really a scary proposition—as what goes around may fly around.

Gbenga Oduntan is senior lecturer in international commercial law at the University of Kent in the U.K. This article was previously published on TheConversation.com