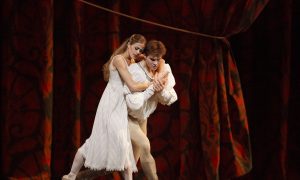 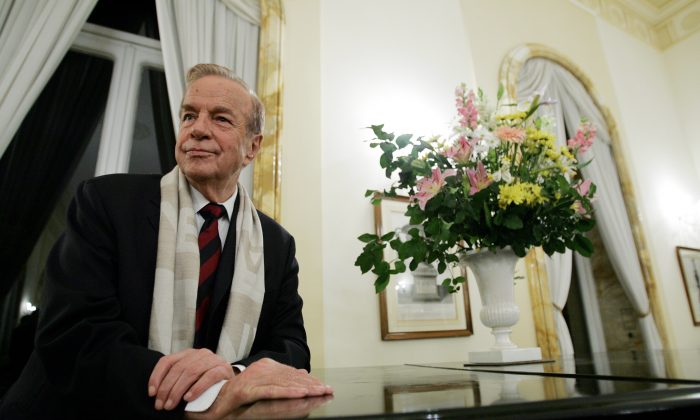 Italian film director Franco Zeffirelli poses at the British Embassy in Rome before receiving the medal of knighthood from the British ambassador to Italy, 24 November 2004. PAOLO COCCO/AFP/Getty Images
Viewpoints

A friend shared with me the news that Franco Zeffirelli passed on at the age of 96 on June 15. Somehow, the news had eluded me.

Zeffirelli, for those who don’t recognize the name, was an accomplished artist, excelling as a producer and director of opera, theater, and cinema. In his 70s, he served for seven years as a member of Italy’s national Senate.

My exposure to Zeffirelli was through film. Interestingly, although I have never had a favorite actor or a favorite actress (although I would have welcomed a call from Candice Bergen back around 1970, but Ms. Bergen, alas, never called), I did have a favorite movie director. Yes, it was Zeffirelli.

His films were and are exemplary for their authenticity and their fidelity to the authors. So many directors want to add their own twist to classic stories. Not Zeffirelli. The man was amazingly humble. He brought to life each story as realistically as possible, striving to reproduce the settings exactly as he envisioned the playwrights, gospel writers, opera librettists, and so on would have known them. Costumes, furniture, dwellings, tools, horse tack, shops—in every detail, the past had been faithfully and painstakingly recreated.

If you watched “Brother Sun, Sister Moon,” about Francis of Assisi, you were transported back to the dawn of the 13th century. If it was “Romeo and Juliet,” Zeffirelli’s time machine took you to 14th century Verona. In “Jesus of Nazareth,” the world of 2,000 years ago came to life. And so on.

Zeffirelli’s fealty to the original material helped him capture better than most directors the spirit underlying the action. Never was the innocence of young love portrayed with greater tenderness and poignancy than by Leonard Whiting’s Romeo and Olivia Hussey’s Juliet under Zeffirelli’s direction. The film’s transitions from light to dark, from shining possibilities to the gloom of doom, from the highest joy to the horror of innocent hopes cruelly dashed as the chain-reaction culmination of human faults, were never captured so vividly. The epilogue, in which the prince’s voice resonates with piercing grief in the stone courtyard is one of the most memorable scenes in cinema. (The actor was the late Robert Stephens, husband to Maggie Smith and father of Toby Stephens of TV’s “Black Sail” fame.)

In “Brother Sun, Sister Moon,” another feature of Zeffirelli’s films reached (in my humble opinion) its zenith: the artist’s uncanny ability to frame each shot as if it could be a painting. Indeed, each face, from the handsome Graham Faulkner as St. Francis and the gorgeous Judi Bowker (another actress who failed to grab me when I was available) as St. Clare, to the extras who had no lines, deserved to be framed. The acting is a bit unpolished from a technical standpoint, but Zeffirelli was looking for emotional believability, and he captured that magnificently. And the relative amateurism helped to set the stage for an acting tour de force by the incomparable Alec Guinness as Pope Innocent III in the climactic scene. The man that younger Americans know as Obi-Wan Kenobi can do more acting with one hand than many actors can muster using everything.

Indeed, Zeffirelli had an amazing knack for discovering new talent and for uncovering additional talent from already known performers. In addition to discovering Whiting and Hussey (who also played the Virgin Mary in “Jesus of Nazareth”) and Faulkner and Bowker, it was Zeffirelli who gave Rick Schroder his film debut in “The Champ.” Schroder was an exceptionally charismatic child star who successfully made the transition to acting as an adult.

As for bringing the best out of established stars, in addition to Guinness, Zeffirelli had Hollywood superstars Richard Burton and Elizabeth Taylor play off each other in “The Taming of the Shrew.” Perhaps his most surprising casting had Mel Gibson, already known as Mad Max and as Martin Riggs of the “Lethal Weapon” franchise, starring as the brooding title character in Zeffirelli’s “Hamlet” (with Glenn Close very effective as Gertrude).

I hope I have enticed you to check out some of Zeffirelli movies if you haven’t seen them before. But this retrospective wouldn’t be complete without a reference to Zeffirelli’s personal life. The product of an affair between a couple who were married to other spouses, he couldn’t use either family name, so his mother named him after the “little breezes”—the zeffiretti—mentioned in a Mozart opera she liked. That name was misspelled at the official registry, resulting in what is a possibly a unique surname.

His mother died when he was only 6. From that point on, he was more or less raised by a group of English expatriate women as a “perfect English gentleman.” Details are in Zeffirelli’s eponymous autobiography, which I have read and recommend, and in the 1999 movie “Tea With Mussolini,” which I have not seen. He had a near-fatal car accident after “Romeo and Juliet,” which resulted in a sort of religious rebirth that made him a devout Catholic for the rest of his life.

Late in life, I believe in his 70s, Zeffirelli announced that he was “homosexual.” He shunned the label “gay,” deeming it inelegant, and upset people in the gay community by publicly declaring that he accepted his church’s teaching that homosexuality is a sin and that he accepted the offer of God’s forgiveness for his sin. As one to whom his faith is very important, I have to admire a man who doesn’t presume to ask his church to alter its doctrines to accommodate his personal lifestyle. Once again, Zeffirelli’s humility shone forth.

Rest in peace, sir, and thank you for sharing the beauty of your artistic vision with so many of us.