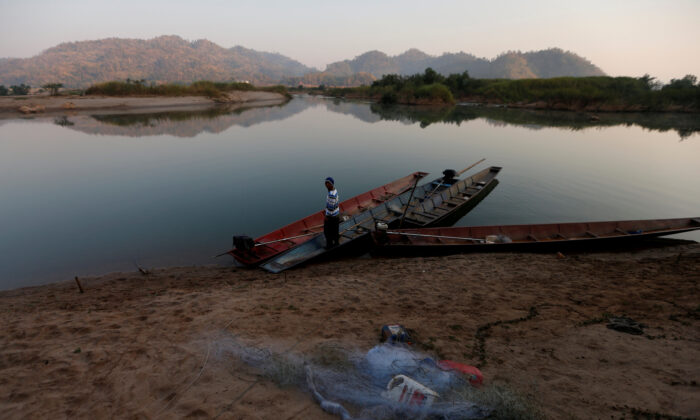 A fisherman is seen on the Mekong River bank outside Nong Khai, Thailand on Jan. 10, 2020. (Soe Zeya Tun/Reuters)
Asia & Pacific

BANGKOK—Thailand has scrapped a Chinese-led project to blast rapids on the Mekong River that had been opposed by local people and environmental groups, a government spokeswoman said on Feb. 5.

China initiated a plan to dredge the Mekong River in 2001 to make room for large ships to carry goods from its landlocked southern province of Yunnan to ports in Thailand, Laos, and the rest of Southeast Asia.

The plan had been opposed by conservationists and communities in Thailand living along the Mekong River. They feared it would harm the environment and benefit only China.

The Thai cabinet agreed to scrap the dredging plan during a weekly meeting on Tuesday.

“The communities affected and non-profit groups were against the plan, fearing it would affect the way of life, and China also had no funding for it … So we ended the project,” said Trisulee Trisaranakul, a deputy government spokeswoman.

“It didn’t take off yet. We were only doing environmental and social impact assessments,” she told Reuters.

The Chinese embassy in Bangkok was not immediately available for comment.

A Thai cabinet document said that China had in any case informed countries on the Mekong River last year that it was not planning to pursue the project, but work had continued on stretches of the river in Laos and Burma (also known as Myanmar).

The Mekong flows from China, where it is known as the Lancang River, through five southeast Asian countries.

During the ASEAN meeting in Thailand on Aug. 1, U.S. Secretary of State Mike Pompeo expressed concern over Chinese dam building, dredging and other activities on the Mekong River.

“We see a spree of upstream dam building which concentrates control over downstream flows,” Pompeo said. “The river has been at its lowest levels in a decade—a problem linked to China’s decision to shut off water upstream. China also has plans to blast and dredge riverbeds. China operates extra-territorial river patrols.”

He also noted “a push to craft new Beijing-directed rules to govern the river” that would usurp the role of the regional Mekong River Commission.

The Mekong River is vital to Southeast Asia, where more than 60 million people rely on and its tributaries for food, water and transport.

The world’s 12th longest river, it runs nearly 3,107 miles (5,000 kilometers) from the Tibetan Plateau and down into mainland Southeast Asia before emptying into the South China Sea, in Vietnam.

By Panarat Thepgumpanat. The Associated Press contributed to this report.