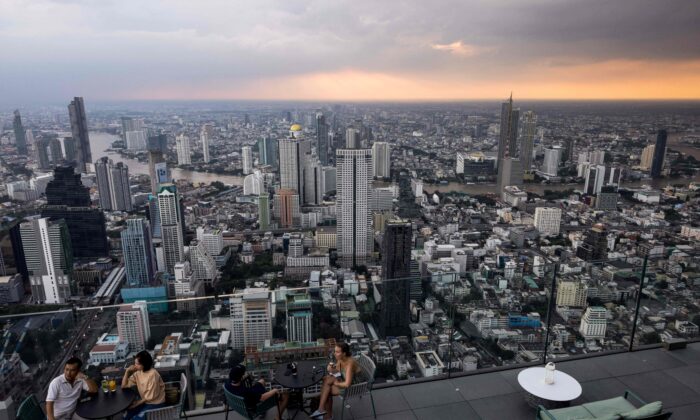 People sit in front of the Bangkok skyline on the observation deck of the King Power Mahanakhon skyscraper on Oct. 25, 2021. (Jack Taylor/AFP via Getty Images)
Investment

The United States is a runner-up to Thailand as the most popular country for Chinese international real estate investments, according to an internal report from Juwai IQI Holdings, which provides one of the largest international property platforms in Asia.

Kuala Lumpur, Malaysia-based Juwai IQI is the technology group for Juwai.com, offering some 6 million property listings around the globe, with information presented in both Chinese and English.

“Thailand has been at the top of our list for several years. It’s the number one tourist destination for those living in China, and properties there are also a lot less expensive than the U.S.,” Juwai IQI spokesman Dave Platter told The Epoch Times.

“Their international schools are excellent, and Thailand also attracts a lot of retirees. Plus, there are those Chinese buyers who are looking for second homes, which they often rent out to other vacationers.”

A recent IQI report shows more than 5,250 condominium purchases by residents of mainland China in 2020, with Bangkok and Chonburi accounting for the largest share of foreign buyer transactions over the past two years, at 80 percent. Phuket, known for its beach resorts and more expensive properties, accounted for only about 4 percent of Chinese property purchases.

“In Thailand, national law prohibits foreigners from owning houses or land, so nearly all foreign buyers purchase apartments. Buyers who are determined to own a house in Thailand must do so via a Thai company,” Somsak Chutisilp, managing director of IQI Thailand, told The Epoch Times.

The report also reveals that over 77 percent of these purchases are for less than 5 million Thai baht, which converts to just over $153,000. For that price, Chutisilp noted, buyers can purchase a detached townhome in a new development on the outskirts of Bangkok.

“In downtown Bangkok, two- to three-story townhomes range in price from 10 million to 25 million Thai baht, which is equal to $300,000 to $760,000,” he said. “They find Bangkok to be a comfortable city with a very low cost of living, a great deal of cultural tourism, and natural attractions to enjoy.”

The third, fourth, and fifth most favored places for Chinese real estate investors are Australia, Canada, and the United Kingdom, respectively. Within the United States, Platter listed Los Angeles, Seattle, Houston, Orlando, Florida, and New York as some of the most popular destinations for purchasing second homes or investment properties.

“Florida is always a good investment because of the warm climate, beaches, and tourist attractions,” Platter said. “There are also a lot of good universities attracting Chinese students.”

The National Association of Realtors (NAR) 2021 report on top U.S. destinations by all foreign buyers, including China, showed Florida at 22 percent, California at 16 percent, Texas at 9 percent, Arizona at 5 percent, and New York at 4 percent. The NAR report noted total foreign investment in U.S. real estate was $54.4 billion from April 2020 to March 2021, with a median purchase price of $351,800.

While many of Juwai’s listings fall within the luxury category—with price tags well over $5 million—there are also a plethora of more affordable homes listed for $300,000 or less. Considering that China still mandates a $50,000 per person annual limit on overseas investments, purchasing property internationally could sometimes be tricky, Platter said.

“In many cases, Chinese buyers already have money in overseas bank accounts, or they have income from earlier overseas investments,” he said. “Sometimes family members will pool their money to make purchases.”

Ritu Rani, a realtor with Prime Realty in Coral Springs, Florida, has been dealing with buyers from mainland China for the past four years in both residential and commercial real estate. Rani currently serves on the Miami Board of the Asian Real Estate Association of America (AREAA), and just completed a term as AREAA national commercial chair for 2021.

“Most of these buyers are upper-middle-class business owners in China and often do cash deals,” Rani told The Epoch Times. “They can get a lot more for their money in Florida, as opposed to New York, Los Angeles, or San Francisco. For commercial properties, Florida also offers a much better return on their investments.”

Newer single-family homes in developments in homeowners’ associations are among the most popular type of properties that her Chinese clients are seeking.

“They also like the warm weather, but the beaches are not really a ‘must-have’ for them,” Rani said. “They’re more concerned about a great educational system in the elementary and secondary schools. Education is so important in the Chinese culture.”

The Orlando area has been among the most popular for Chinese buyers, because of the number of new developments, as well as proximity to destination spots such as Disney World, Epcot, Universal Studios, SeaWorld, and others, Rani said.

“They can have a very good quality of life here and it’s so much less expensive than in other major U.S. cities,” she said.

Most of her Chinese buyers are fluent in English and for those who are not, she refers to her AREAA colleagues for translations. On the commercial side, her Chinese clients are most interested in purchasing apartment buildings or hotels.

Chinese investors, Platter says, remain the fastest-growing segment of global property, including luxury homes to modest condominiums. Chinese real estate purchases are predicted to top $220 billion by the end of the year. One of the reasons for China’s rise in real estate transactions is the fact that China ranks first in nations with the most internet users.

A Juwai recent market study also predicts there will be more than 720 million middle-class Chinese by 2024 and 57 million affluent Chinese by the end of 2022.