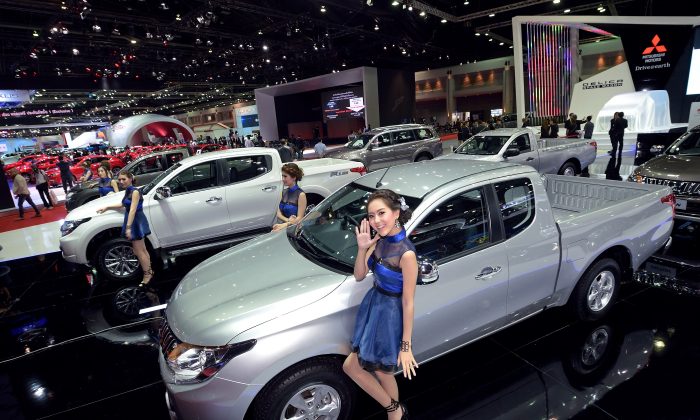 When we think of Thailand we often think of its world-renowned cuisine, its breathtaking natural landscapes, and its rich cultural heritage. However, Thailand’s strengths go beyond scenic beauty and colorful history.

Thailand is the largest automotive manufacturer in Southeast Asia. And it has become a regional hub for the aviation and aerospace industry. Both industries have experienced rapid growth and have attracted significant foreign investment over the last few decades.

“Thailand’s industry has grown because Japan has lost its competitiveness. They had to relocate a lot of manufacturing to Thailand. That’s how our industrial base grew,” said Chutintorn Gongsakdi, director-general of International Economic Affairs, a department of Thailand’s Ministry of Foreign Affairs.

Thailand has long been considered an investor friendly country with its low tax rates, cheap labor, and geographical advantage. However, domestic political instability, which resulted in a coup d’état in May 2014, has affected the business and investment environment in the country. Thailand has lagged behind neighboring countries in private investments.

As the political climate settled down over the past year, the government is now looking to restore investor confidence. And it is primarily focusing on promoting its two niche industries: automotive and aviation.

On a visit to Thailand in October, arranged by the Thai Consulate General in New York and Thailand’s Board of Investment, Chutintorn explained how these industries will help shape the country’s economic future:

“We are more than Thai food or Thai dancing. … What will make us a developed country is our industry and services.”

Located in the heart of Southeast Asia, Thailand has established itself as an aviation center in the region. Air passenger movement in Thailand grew at an average annual rate of 14.6 percent from 2009 to 2013.

“It is a top priority sector that we want to bring to Thailand,” said Ajarin Pattanapanchai, deputy secretary general of the board of investment. The Thai government grants tax holidays up to 8 years to investors in the aerospace industry.

Senior Aerospace, a British manufacturer of structures, components, and assemblies, expanded its production facility in Thailand to meet the demand for lower costs coming from customers like Boeing and Airbus.

“Cost reduction in aerospace has been taken very seriously over the last three years,” said Jamie Looker, CEO of Senior Aerospace, Thailand. The airline industry was constantly pushing Airbus and Boeing to reduce their costs. The company can attain 25-30 percent cost savings in Thailand, compared to plants in the United States and the U.K., said Looker.

Another company operating in Thailand is Triumph Structures. Headquartered in Pennsylvania, Triumph manufactures and overhauls aerospace structures, systems, and components. The Thailand subsidiary established in 2006, produces a number of products including machined and composite parts, and assemblies.

“We are in the free [trade] zone. We have been running the company for seven years and never had any issues. It is really advantageous to be in Thailand in terms of customs. It is very efficient,” said Remy Maitam, president of Triumph Aviation Services Asia.

Maitam also praised the talent of the workforce in the country, particularly of Thai engineers.

In addition to parts and equipment, Thailand is also gearing up to become a major player in the region’s multibillion dollar aircraft maintenance industry. The country has commenced training aerospace professionals and technicians to service the industry.

Thailand is the largest automotive manufacturer in Southeast Asia, with a production capacity of more than 2 million units per year. The country has become a main production base for many manufacturers including Ford, Toyota, Isuzu, Mazda, Mitsubishi, Honda, BMW, Nissan, and Suzuki.

The automotive industry currently accounts for approximately 12 percent of the country’s GDP and employs more than 550,000 people. It is the largest export sector in Thailand, with an export value of $30 billion, according to the Thailand Ministry of Commerce.

Thailand auto exports jumped in September 2015. Despite weak domestic demand, production rose 4.4 percent compared to a year earlier, and 7.8 percent on a monthly basis to 171,496 units in September.

“Since the domestic demand is low, more than 50 percent of the total production is export. We export to Australia, Europe, Africa, and Latin America. We have just started to export to United States, as well,” said Ajarin.

Currently, Thailand is moving toward becoming a global green automotive production base. It is currently in the second phase of its eco-car program, which was initiated in 2013. The program is designed to establish Thailand as a manufacturing hub for small, fuel-efficient cars.

The first phase was launched in 2007 and secured a $900 million investment from five vehicle manufacturers: Mitsubishi, Honda, Nissan, Suzuki, and Toyota. For the second phase, in addition to the original five manufacturers, Mazda has invested over $500 million to manufacture eco-cars.

In particular, Mitsubishi Motors has had a long presence in Thailand. The company has three assembly plants with a total capacity of 424,000 units annually. This makes Thailand the largest base of Mitsubishi Motors outside of Japan.

Both the automotive and aviation industries are expected to grow as Association of Southeast Asian Nations (ASEAN) Economic Community comes to fruition this year. The 10 ASEAN countries have come together to form a single market and production base, allowing the free flow of capital, goods, services, investment, and skilled labor across the region.

“Our future is in the ASEAN, which has more than 600 million population,” said Chutintorn.

Thailand has more skilled labor compared to neighboring countries like Vietnam, Cambodia, and Laos. However, with unemployment in Thailand at less than 1 percent, some other Asian nations still have cheaper labor.

The real challenge is to become the next South Korea. They were poorer than us, but with science and technology they were able to thrive.
— Chutintorn Gongsakdi, director-general, International Economic Affairs

“In order to remain competitive, we need to move some of our production to the neighboring countries,” said Chutintorn.

Thailand also needs to step up in science and technology and that is where the future is, according to Chutintorn.

“The real challenge is to become the next South Korea. They were poorer than us, but with science and technology they were able to thrive,” he said.

One way Thailand is making the shift is through government policy. Thailand has an open-door approach to foreign investors that brings technology, innovation, and technical training to the country.

The 2015 World Bank Ease of Doing Business Index Report ranked Thailand the third country in Southeast Asia. It is also ranked the sixth most attractive nation in the world for offshore locations, according to A.T. Kearney’s 2014 Global Services Locations Index.

The government plans to introduce powerful incentives, like generous tax breaks and other measures to match or exceed those existing in neighboring countries.

Upgrading its logistics and infrastructure network and establishing economic zones and a digital economy are all part of a detailed plan to attract investors and businesses in the coming years.

Thailand is already the second largest economy in Southeast Asia. It experienced 2.9 percent GDP growth in the first half of 2015. With a location at the heart of Asia, a talented workforce, and investment incentives, it’s become a promising destination for a growing number of industries.