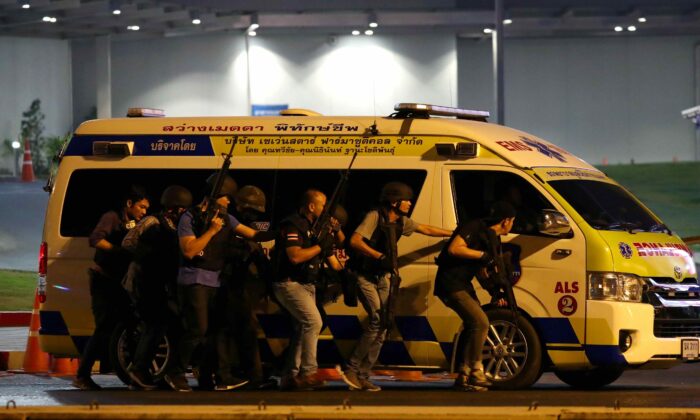 Thailand security forces take cover behind an ambulance as they chase a shooter hidden in a shopping mall after a mass shooting in front of the Terminal 21, in Nakhon Ratchasima, Thailand, on Feb. 9, 2020. (Athit Perawongmetha/Reuters)
Asia & Pacific

BANGKOK—Thai security forces on Sunday killed a soldier after he carried out a mass shooting that left at least 21 people dead, police and military sources said.

They said he had been killed at the shopping mall where he was holed up in the northeastern city of Nakhon Ratchasima.

“The police have killed the perpetrator and rescued eight hostages. Some were wounded,” said one of the security sources.

Both declined to be named because they were not authorized to speak to the media.

The killings began at around 3 p.m. on Saturday when the soldier opened fire in a house before moving to an army camp and then to the mall in Nakhon Ratchasima in northeastern Thailand.