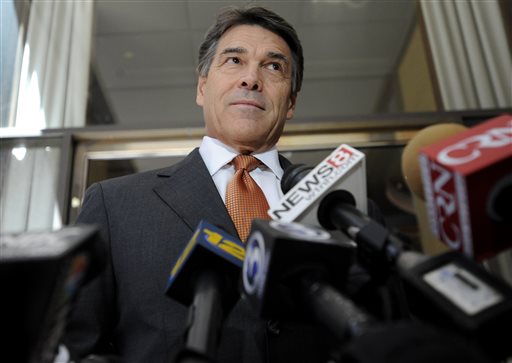 A file photo of Texas Gov. Rick Perry speaking to the media before hosting a lunch appointment with Connecticut gun makers in Hartford, Conn., Monday, June 17, 2013. Perry celebrated the Supreme Court's decision on June 25 to strike down part of the Voting Rights Act that restricted Texas's autonomy in deciding its voting laws. (AP Photo/Jessica Hill)
US

Texas voter ID law: Texas lawmakers enthusiastically moved to revive voter legislation deemed by a federal court last year to be discriminatory after a Supreme Court ruling on Tuesday that returned some power to the state in determining its own voter laws.

Texas Gov. Rick Perry drew up redistricting maps in 2011 that the federal courts said left minorities at a disadvantage. Texas also sought to require photo identification at polling stations. One set of state data showed Hispanics are 46.5 percent less likely to have the required official identification, and another set of state data showed they are 120 percent less likely, according to news site Talking Points Memo.

The Supreme Court ruling on Tuesday effectively gutted a 1965 bill that required certain states with a history of discrimination against minority voters to get federal permission for changes in voting procedures.

“Texas may now implement the will of the people without being subject to outdated and unnecessary oversight and the overreach of federal power,” Gov. Perry said Tuesday, according to the Houston Chronicle. Attorney General Greg Abbott said in a statement cited by the Chronicle: “With today’s decision, the State’s voter ID law will take effect immediately.” Abbott also said Perry’s redistricting map may take effect.

Tuesday’s ruling kept part of the Voting Rights Act that mandates the Department of Justice watch for discriminatory voting rules—section 5—but it struck down the part that designates which places require such supervision—section 4.

Congress will have to renegotiate the details based on current data. A main argument against section 4 was that it was based on outdated information.

Chairman of the Mexican American Legislative Caucus Trey Martinez Fischer told the Chronicle he hoped section 5 would be “effective to its last breath.”

President Barack Obama denounced the ruling in a statement: “I am deeply disappointed with the Supreme Court’s decision today. … For nearly 50 years, the Voting Rights Act—enacted and repeatedly renewed by wide bipartisan majorities in Congress—has helped secure the right to vote for millions of Americans.”