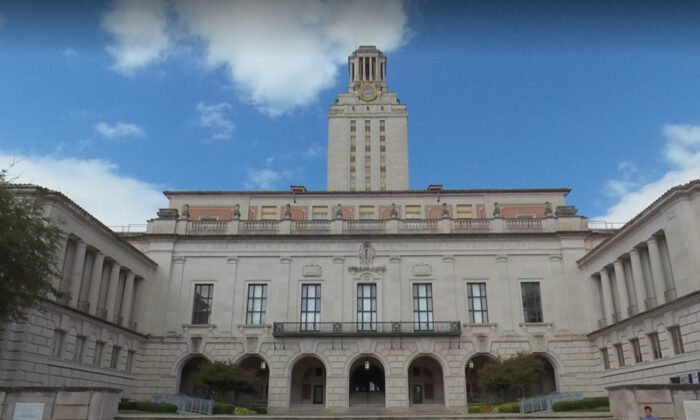 The University of Texas at Austin has a new syllabus that includes asking "all students to help to create an atmosphere of mutual respect and sensitivity." (File Photo)
US

Business school professors at the University of Texas at Austin have been advised to issue warnings to students in classes of potentially offensive and traumatizing curriculum content.

Richard Lowery, associate professor of finance at UT-Austin, posted part of the syllabus template on Twitter on Aug. 10 questioning its relevance.

“Behold our new syllabus template at the McCombs School of Business,” Lowery posted, adding “is this what you want to be paying for?”

While the entire document had standard suggestions on such things as attendance and grading, it encouraged content warnings for students, acknowledgement of indigenous land, and gender pronoun sensitivity.

When contacted, Lowery told The Epoch Times the syllabus warning was a new suggestion this year—but noted social justice had become a dominant force at UT-Austin, which is one of Texas’ most prominent public universities.

The syllabus suggested the following wording for potentially traumatic content: “Our classroom provides an open space for the critical and civil exchange of ideas. Some readings and other content in this course will include topics that some students may find offensive and/or traumatizing. I’ll aim to forewarn students about potentially disturbing content and I ask all students to help to create an atmosphere of mutual respect and sensitivity.”

It’s unclear to Lowery specifically what business content might require such a warning. His emails to administrators calling the trigger clause “ridiculous” were ignored.

Shilpa Bakre, a spokeswoman at UT-Austin, responded to The Epoch Times via email, saying the Provost Office provides a template as a resource for all faculty.

She confirmed the warning was not required, but did not explain what content would justify such.

The only information faculty are required to have in a syllabus pertains to basic course information such as course materials, grading policies, final exam date, and resources for students with disabilities, she wrote.

The syllabus template also recommended statements on diversity and inclusion and preferred gender pronouns. Professors are “strongly encouraged” to be sensitive to student preferences.

Also part of the syllabus is an indigenous land acknowledgement.

The faculty passed a resolution recognizing tribal land ownership in September of 2021, Lowery said. While it isn’t mandatory, faculty members recommended that the acknowledgement be issued at public events and the first day of class.

“I would like to acknowledge that we are meeting on the Idigenous [sic] lands of Turtle Island, the ancestral name for what is now North America. Moreover, I would like to acknowledge that Alabama-Coushatta, Caddo, Carrizo/Comecrudo, Coahuiltecan, Comanche, Kickapoo, Lipan Apache, Tonkawa, Ysleta Del Sur Pueblo, and all the American Indian and indigenous peoples who have been or have become a part of these lands and territories in Texas.”

In February, the university’s faculty council voted overwhelmingly to defend teaching on gender issues and Critical Race Theory, seemingly thumbing their noses at the Texas Legislature’s recent ban on CRT in K-12 schools.

In response, Texas Lt. Gov. Dan Patrick vowed to end professor tenure for all new hires at Texas public universities and colleges in an effort to combat faculty members who teach CRT.

Patrick, who oversees the Senate, proposed a change to state law making teaching the ideology grounds for revoking tenure for professors who already have it.

Lowery said only five professors, including himself, voted against teaching CRT.

Essentially the entire faculty has embraced the Marxist-based theory of class struggle, he said. Race and gender now take the place of class as the oppressed.

Institutes of higher learning have now become intolerant to free speech and opposing viewpoints, he said, which harkens back to the rise of communism in other cultures.

“The communists came to power. They took over bureaucracies and made sure no one could dissent. And that’s their playbook,” Lowery said.

He fears that most private universities are doomed because they have been completely overrun with iron-fisted policies that don’t allow dissent. Public universities could be saved only if state governments force them to “do things right,” he said.

“This is all faculty-driven. They like showing obedience to the current social justice climate,” he said.

Texas State Rep. Steve Toth told The Epoch Times the state legislature intends to expand the CRT law during  next year’s session to include universities and “cut off this garbage.”

If Texas’ universities violate civil rights discrimination laws or other laws enacted by the state legislature concerning higher education, then their funding will be cut, he said.

“I’m confident we’re going to get to the bottom of this,” Toth said. “They have become a law unto themselves.”