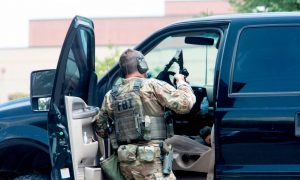 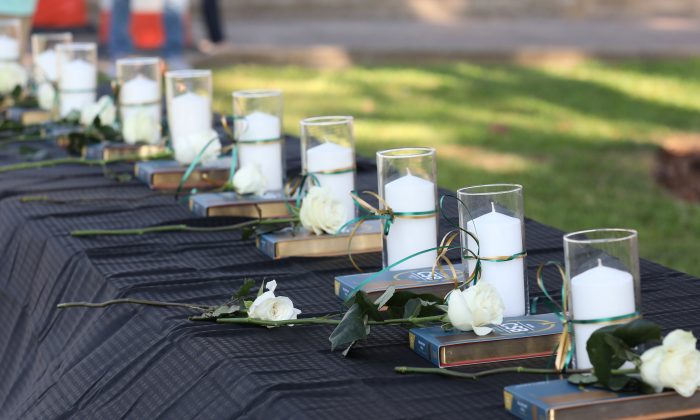 Candles line a table during a vigil held at the Texas First Bank after a shooting left several people dead at Santa Fe High School in Santa Fe, Texas on May 18, 2018. (REUTERS/Trish Badger)
US News

SANTA FE, Texas—The 17-year-old student who authorities said killed 10 people when he opened fire in an art class in his Houston-area high school appeared to be disoriented on the morning after the rampage, one of his lawyers said on Saturday.

The teenager, identified by law enforcement as Dimitrios Pagourtzis, has been charged with capital murder and is being held without bail in Santa Fe, Texas, where authorities said he opened fire shortly before 8 a.m. on Friday. In addition to the nine students and one teacher killed, gunfire wounded 10 people, with two of them in critical condition.

Nicholas Poehl, one of two lawyers hired by the suspect’s parents to represent him, told Reuters he had spent a total of one hour with Pagourtzis on Friday night and Saturday morning.

Asked if Pagourtzis has provided authorities with information about the shootings, Poehl said: “Honestly because of his emotional state, I don’t have a lot on that.”

Pagourtzis waived his right to remain silent and made a statement to authorities admitting to the shooting, according to an affidavit ahead of his arrest.

On Friday morning, Santa Fe High School, southeast of Houston, became the scene of the fourth-deadliest mass shooting at a U.S. public school in modern history, joining a long list of U.S. campuses where students and faculty have fallen victim to gunfire.

A vigil was held Friday night for the victims, who have not been officially identified. Authorities said they were likely to begin releasing the names on Saturday.

“This will bring us closer together – hopefully, a positive impact from something negative,” said Clayton George, 16, who played football with the suspect.

The Pakistan Embassy in Washington D.C. identified one of the victims on Twitter as Sabika Sheikh, a Pakistani exchange student, while the brother-in-law of Cynthia Tisdale, a teacher’s aide and mother of four, said on Facebook she was killed in the attack.

National Football League star J.J. Watt, who plays defensive end for the Houston Texans, said he will pay for the funerals of the deceased, local media reported.

“Absolutely horrific,” he tweeted about the shooting.

Classmates at the school of some 1,460 students described Pagourtzis as a quiet loner who played on the football team. On Friday, they said he wore a trench coat to school in Santa Fe, about 30 miles southeast of Houston, on a day when temperatures topped 90 degrees Fahrenheit (32 degrees Celsius).

Texas Governor Greg Abbott said Pagourtzis obtained firearms from his father, who had likely acquired them legally, and also left behind explosive devices.

Abbott told reporters that Pagourtzis wanted to commit suicide, citing the suspect’s journals, but did not have the courage to do so.

‘I Had To Get Out of There’

Pagourtzis was charged with capital murder and denied bail at a brief court hearing later on Friday, where he appeared in handcuffs and wearing a green prison jumpsuit. He spoke in a soft voice and said “Yes, sir” when asked if he wanted a court-appointed attorney, along with other questions.

Poehl, the suspect’s lawyer, said he expected a second hearing soon and would likely have more information about that on Monday. The discovery process by prosecutors would take a long time, he said.

Texas Attorney General Ken Paxton told CNN authorities were investigating whether anyone else helped in the attack.

Authorities have not disclosed how many explosive devices were found or if any of the deceased were killed or hurt by explosions. It is also unclear why the shooter targeted the art class.

Pagourtzis spared people he liked so he could have his side of the story told, a charging document obtained by Reuters showed.

Abbott said investigators had seen a T-shirt on the suspect’s Facebook page that read “Born to Kill,” and authorities were examining his journal. But there were no outward signs he had been planning an attack, he said.

Some aspects of Friday’s shooting had echoes of the massacre at Columbine High School in 1999. The two teenaged killers in that incident wore trench coats, used shotguns and planted improvised explosives, killing 10 before committing suicide themselves.

It was the second mass shooting in Texas in less than seven months. A man armed with an assault rifle shot dead 26 people during Sunday prayers at a rural church last November.

Two school officers engaged the Santa Fe High School shooter, including school district police officer John Barnes, who was in critical condition after a gunshot wound to his elbow that almost caused him to bleed out, hospital officials said.